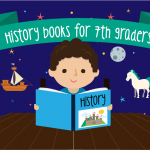 These 12 books bring historical events including slavery, the Vietnam War, and the rise of Hitler vividly to life for 12- and 13-year-old readers.

Thirteen-year-old Mai Yang is a recent Hmong immigrant to the United States, arriving after 10 years in a squalid Thailand refugee camp. She finds life in Providence, Rhode Island, difficult because her cultural values clash with shopping, dating, Christianity, teenage rebellion, and other aspects of the American lifestyle. This story provides an excellent portrayal of the immigrant experience and the challenge of assimilation, with shrewd observations about American behavior, Hmong traditions, teenage boundaries, and peer pressure. Includes glossary, afterward, Hmong pronunciation guide, list of Thai words, definition of Thai symbols, and bibliography.

Perfect for: Those interested Thai culture, in knowing what it’s like to be an immigrant or an outsider, and immigrant children.

Heart-breaking, horrifying chronicle of the US Army and Navy nurses stationed in the Philippines during World War II. Many worked courageously in jungle hospitals in Bataan or in underground tunnels on Corregidor Island. Others were POWS of the Japanese, enduring starvation and disease for three years. Emotionally gripping, it depicts their dedicated aid to their profession throughout the ordeal, their bonding with each other, their varying backgrounds, and their difficulty readjusting after the war because of post-traumatic stress disorder (a diagnosis not recognized until 1980) and lack of veteran support. This book includes interviews, personal snapshots, letters, diaries, maps, an index, glossary, and a timeline. (Graphic descriptions of violence are not suited for all readers.)

Perfect for: Those interested in the nursing profession, WWII aficionados seeking a less-viewed perspective.

This darkly humorous biography of Ivan the Terrible (1533-1584), the sadistic, paranoid Russian tsar who boiled people alive, tortured animals, beat his own son to death with a metal stool, and kept a meticulous list of his victim’s names (3,000+) shows exactly how he got his name. HIs mental illness is blamed on a horrific childhood; orphaned with his deaf and mute brother when he was only 7, Ivan was brutalized, starved, isolated, and humiliated by Moscow’s nobility. After ascending the throne at the age of 16, Ivan amassed military power to conquer the neighboring Mongol kingdoms of Kazan, Astrakhan, and southwestern Siberia. The illustrations, maps, and informative sidebars are great.

Find Ivan the Terrible: Tsar of Death (Wicked History) at your local library.

I Am Malala: The Girl Who Stood Up for Education and Was Shot by the Taliban

Malala Yousafzai was shot in the head by the Taliban, on a bus in Pakistan, when she was 15 years old, because she advocated for girls’ education. She survived. This inspirational autobiography describes how Malala’s home in the beautiful Swat Valley was taken over by extremists, portrays her courageous, tight-knit and supportive family, and depicts how a single committed individual can create positive change in the world. Malala became the youngest recipient of the Nobel Peace Prize. Her charismatic personality infuses the book with compassion, humility, wit, and wisdom. Her bravery is clear but unassuming.

Find I Am Malala: The Girl Who Stood Up for Education and Was Shot by the Taliban at your local library.

Germany’s Hitler Youth (Hitlerjurgend) — the largest youth group in history — are scrutinized in this chilling examination. Hitler launched the Hitler Youth Program in 1926; by the time World War II arrived, an entire generation of brainwashed soldiers eagerly assisted him in his war plans and genocidal ambitions. Why did the youngsters fanatically adore and obey Der Fuhrer? Answers are sought in 12 separate stories that utilize interviews of ex-Hitler Youth, plus diaries, letters, and oral histories. Horrific and fascinating, with excellent research, period photographs, and Nazi propaganda reproductions that show how a nation of youth were psychologically manipulated.

Perfect for: WWII buffs and kids intrigued by psychology and groupthink.

Find Hitler Youth: Growing Up in Hitler’s Shadow at your local library.

This pithy biography of the German Führer who started World War II, murdering 40 million to 50 million enemy soldiers, Jews, gays, Slavs, Gypsies, mentally ill, and disabled. It begins with little Adolf’s unhappy childhood: he hated his father and his teachers, and they hate him. It takes a darkly humorous look at Hitler’s failure as an artist, his raging temper, his anti-Semitism, his World War I service, his rise to power via persuasive speeches, his early wartime success, and his final failure and suicide., Quotes, photos, maps, timeline, glossary, “Wicked Web” list of his friends and enemies, and reference books for further reading round out this surprisingly entertaining read.

Perfect for: Those interested in the rise of the dictator but not suitable for children traumatized by cruelty and genocidal ambitions.

Galileo and the Magic Numbers

Galileo Galilei, the Renaissance genius of astronomy and mathematics, questioned everything in his search for truth, even Aristotle’s laws of gravity and the cosmological beliefs of the Catholic church. This thorough biography includes his childhood fascination with music and geometric shapes, his insatiable questions at universities, his improvements on the compass and telescope, and his imprisonment by the pope for believing the Earth rotated around the sun. The title refers to the Galileo’s early preoccupation with the Pythagorean theorem: a² + b² = c²

Perfect for: Lovers of math and science, children with bright ideas and deeply thoughtful minds, and anyone who admires brilliance and bravery.

Find Galileo and the Magic Numbers at your local library.

From Slave Ship to Freedom Road

Emotional prose conveys the inner experiences of multiple narrators — slaves, slave-owners, abolitionists — in this deeply felt narrative encompassing 400 years, from the Middle Passage to Civil Rights demonstrations. Topics in the text are intense with some in-your-face exercises and political opinions, and illustrations are graphic, including an auction block, a lashed slave’s bloody back, a lynching, and a slave-ship with naked Africans stacked seven-high. Painfully honest and powerful, but, —warning — this book has been accused of making white kids feel guilty and ashamed.

Find From Slave Ship to Freedom Road at your local library.

Cowboys, Indians, and Gunfighters: The Story of the Cattle Kingdom

Saddle up, pardners. Let’s stampede into the Old West. This action-packed volume depicts the adventurous cattle-ranching lifestyle. Sidle on up to the colorful sketches of Wyatt Earp, Buffalo Bill, Wild Bill Hickok, Bat Masterson, black rodeo star Bill Pickett, and Teddy Roosevelt, the future president. While Comanche Indians are praised as the “finest horsemen of the Great Plains,” the intentional slaughter of buffalo herds to starve Indian tribes is revealed. Meticulously researched, with archival photos, paintings, and etchings readers will be all-fired eager to read this one from cover to cover.

Perfect for: Those interested in the Old West, outlaws and lawmen, and true stories of early settlers and Native American relations.

Find Cowboys, Indians, and Gunfighters: The Story of the Cattle Kingdom at your local library.

Bomb: The Race to Build — and Steal — the World’s Most Dangerous Weapon

Perfect for: Kids who need to be convinced that history isn’t boring, kids interested in science or military advancement, and those who like thrillers

Find Bomb: The Race to Build — and Steal — the World’s Most Dangerous Weapon at your local library.

Black Potatoes: The Story of the Great Irish Famine

A blackening fungus (pythophthora infestans) destroys Ireland’s potato crops in the mid-1800s. Deprived of their staple food and primary income, 1 million Irish people die of starvation and disease, and 2 million flee the island. This succinct chronicle conveys the suffering in heartbreaking stories: people eat weeds and commit crimes because jail offers a meal; children die on the street; emaciated passengers die on “coffin ships” to America. Archival newspaper illustrations, quotes from survivors, traditional poetry and prose, and six pages of bibliographical information make these people, their lives, and their experiences real.

Perfect for: Those interested in immigration, history of Irish people, and how events influence politics, economy, and entire nations.

Find Black Potatoes: The Story of the Great Irish Famine at your local library.

Young readers will rapidly burn their way through this scorching account of the Chicago Fire of 1871, ignited on a dry day in Patrick and Catherine O’Leary’s barn. In 31 hours, the inferno nearly incinerated the entire Windy City, leaving 98,500 homeless. The torrid narrative provides a flame-by-flame account of the blaze’s destructive path, with vivid eyewitness quotes, and searing details: firefighters rushed to assist from as far away as Pittsburgh and Cincinnati. Social causes are also examined —the out-of-control conflagration was aided by the sad fact that Chicago was entirely built out of wood. Includes city maps, drawings, archival photos, engravings, and feverish chapter titles, such as “The Dogs of Hell Were Upon the Housetops.”

Perfect for: Disaster fans, those interested in Chicago or cities’ history.

Find The Great Fire at your local library.