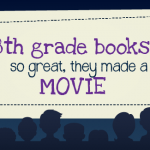 Advertisement
Parenting » Book lists » 8th grade books so great, they made a movie

8th grade books so great, they made a movie

These compelling reads (and movies) offer up intense characters and coming-of-age dramas for your teen to read, watch, and compare.

Watching the movie version to boost reading skills? Yes! Under the Common Core Standards, analyzing how a filmed or live version of a story compares with the original text is a key skill for eighth graders. After your child has read a book and seen the movie, talk about how the two compare. Why do you think the filmmaker changed or omitted parts of the book? How did those changes affect the story? Do you think you have a more in-depth understanding of the story because you read the book? Why?

The hook: When Lena moves to his small Southern town, Ethan realizes that this mysterious, outcast girl has been the subject of his dreams for months. Irresistibly drawn to Lena, Ethan discovers that the two are psychically connected. Together they race to discover the secrets behind the dark curse that looms over her family. The first in a four-book series, this story will be a hit with tweens and teens who appreciate star-crossed, supernatural romance.

Want to see the movie? Check out the 2013 adaptation, which follows the first book in the series.

Perfect for: Teens who liked Twilight.

This is an unusual novel about the power of words. The Book Thief takes on the seemingly impossible setting of Nazi Germany and the improbability of Death as narrator and weaves together one of the most compelling stories of the year. Winner of the American Library Association’s Michael L. Printz Award for Excellence in Young Adult Fiction, the author has created what can only be called an instant classic.

Want to see the movie? Check out the faithful 2013 adaptation starring Geoffrey Rush and Emily Watson, though parents should note the film contains some violence and intense themes.

Find The Book Thief at your local library.

In this tale, a war-ravaged world divides people based on personality and aptitude in order to guarantee peace. But rumblings of a power struggle have already begun. Just as our young protagonist transitions into adulthood, she learns she doesn’t quite fit any of the five factions. She’s “divergent,” a fact she must keep quiet about if she is to avoid becoming the target of the establishment. As Tris becomes embroiled in the war, she finds herself grappling with politics, loyalty, forgiveness, as well as love and her own identity.

Want to see the movie? Check out the 2014 adaptation starring Shailene Woodley and Kate Winslet, though parents should note the film contains some violence and intense themes.

Perfect for those who like strong female characters, dystopian world stories, and action.

Find our Divergent at your local library.

The Fault in Our Stars

Knowing that she is dying of cancer, teenaged Hazel tries to discourage a budding romance with Augustus, a boy in her cancer support group. But despite her best intentions, the two fall in love and discover that the joy of making a real connection with another person is worth any risk. This is an intense book that deals with the harsh realities of cancer; but it’s uplifting, beautiful prose makes it an appealing story for teens.

Find The Fault in Our Stars at your local library.

The Lord of the Rings series

The hook: After lying dormant for centuries, the Dark Lord Sauron is rising again, and his return to domination over Middle Earth depends on recovering his evil ring of power. It falls to some humble hobbits to keep the ring safe from Sauron and ultimately drop it into the fiery depths of Mount Doom, which is the only way the ring can be destroyed. And so forms a motley fellowship that includes four hobbits, an elf, a dwarf, a wizard, and two men, who battle evil in many forms on their quest to destroy the One Ring. This epic fantasy trilogy has inspired a passion for fantasy in generations of teens.

Want to see the movie? The Lord of the Rings trilogy of films starring Elijah Woods, Ian McKellen, and Viggo Mortensen closely follows the series, but parents should note they may be too violent for younger or sensitive teens and tweens.

Perfect for: Teens who like epic battles involving elves, orcs, and dwarves.

Find our favorites at your local library: The Fellowship of the Ring, The Two Towers, The Return of the King.

The Hitchhiker’s Guide to the Galaxy series

The hook: Just before the Earth is destroyed to make way for a galactic freeway, Arthur Dent is rescued by his friend Ford Prefect, a researcher for The Hitchhiker’s Guide to the Galaxy. The pair take off on an exciting journey through space, meeting a cast of bizarre characters with names like Zaphod Beeblebrox and Veet Voojagig on the way. Tweens and teens love the irreverent, satirical humor that characterize these books (which were originally a radio series).

Want to see the movie? Check out the 2005 adaptation starring Zooey Deschanel and Martin Freeman.

Perfect for: Tweens with a snarky sense of humor.

Find our favorites at your local library: The Hitchhiker’s Guide to the Galaxy, The Restaurant at the End of the Universe, So Long, and Thanks for All the Fish.

After barely surviving the car wreck that kills her beloved parents and younger brother, Mia, a talented cellist, is in a coma. She narrates her life story from this place, hovering between life and death, observing her boyfriend and best friend at her bedside as the doctors work to save her life. In the end, Mia must decide whether to come back to a life without her family or to simply let go. This emotional and thought-provoking book deals with intense themes and has some sexual content that make it most appropriate for teens and up.

Want to see the movie? The 2014 adaptation starring Chloe Grace Moretz stays fairly true to the plot of the book.

Perfect for: Teens who like pondering life’s deeper questions.

Find If I Stay at your local library.

Growing up in America, Gogol Ganguli chafes against his unusual name and his Indian heritage. Determined to forge his own identity separate from his Bengali parents, Gogol changes his name, moves to New York, and begins dating Maxine, a white woman from a wealthy background. But as he and his parents grow older, Gogol is increasingly drawn to his past, even as he continues to search inside himself. Teens and young adults will connect with Gogol’s quest for independence and sympathize with his complicated, well-expressed feelings about his parents’ expectations for him.

Want to see the movie? Check out the colorful 2007 adaptation, which follows two generations of the Ganguli family.

Perfect for: Teens exploring their identities.

Find The Namesake at your local library.

The Perks of Being a Wallflower

Charlie is a shy, sensitive freshman who struggles to navigate the complex, emotionally charged world of high school after his best friend commits suicide. Written as a series of earnest letters from Charlie to an unidentified recipient, the book’s approachable style makes this intense coming-of-age tale especially relatable for teens and a good choice for reluctant readers. Parents should note that the book covers Charlie’s observations on topics including suicide, sex, alcohol, and drugs.

Want to see the movie? The 2012 adaptation, which was directed by the book’s author, closely follows the plot of the book.

Find The Perks of Being a Wallflower at your local library.

To Kill a Mockingbird

Growing up in 1930s Alabama, Jem and Scout Finch live a comfortable life playing with their neighbor Dill, spying on the mysterious recluse Boo Radley, and getting into mischief. But when a black man is accused of raping a white woman, and their lawyer father, Atticus, chooses to defend him, the children soon come face to face with the realities of violence and prejudice in their small town. This powerful story deals with mature themes and presents teen readers with a realistic and moving depiction of racism in the segregated South.

Want to see the movie? The 1962 adaptation won three Academy Awards. Parents should note that it contains racially charged language and courtroom descriptions of sexual violence.

Perfect for: Teens with a strong sense of right vs. wrong.

Find To Kill a Mockingbird at your local library.