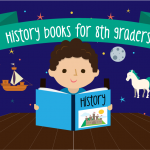 Volatile times and fascinating people — from Benedict Arnold to Eleanor Roosevelt — make for entertaining and educational reading this year.

Al Capone and the Roaring Twenties

America’s most notorious gangster thrived in the wild-and-loose atmosphere of the Prohibition Era. This entertaining biography of Al Capone (1899-1947) — aka “Scarface” and “Public Enemy #1” — tells the story of a strong boy with huge fists who joined his first criminal organization in Brooklyn after sixth grade. By age 26 he was a Chicago gang leader; he became a national celebrity for his skill at bootlegging (smuggling alcohol) and taking out rivals with machine guns. Eventually he was captured by FBI agents and subsequently imprisoned — but not for murder. The lifestyle of the Roaring ’20s is examined, with attention given to iconic inventions such as the Model T and the vacuum cleaner. It includes black-and-white photos and website references.

Perfect for: Fans of the Roaring ’20s, those curious about this period that heralded a modern age, and kids interesting in biographies of “bad guys.”

Find Al Capone and the Roaring Twenties at your local library.

Eleanor Roosevelt: A Life of Discovery

Eleanor Roosevelt’s inspirational life is examined, from her unhappy childhood to her marriage to her fifth cousin to her years as First Lady to her multiple contributions to the United Nations. Her maturation from an insecure, orphaned young girl to an eloquent humanitarian and activist for peace, justice, racial equality, and prosperity is emphasized in down-to-earth prose that matches the subject’s straightforward personality. The intimate portrayal also discusses Eleanor’s reaction to FDR’s infidelity and her encouragement for him to stay in politics despite his polio disability. Diary entries, 140 photographs, newspaper articles, and abundant quotes complete the story.

Perfect for: Readers who like to see women rise to success, those who are socially conscientious, and those needing a female inspiration.

Find Eleanor Roosevelt: A Life of Discovery at your local library.

Hang a Thousand Trees with Ribbon: The Story of Phillis Wheatley

In 1761 a young African girl, Keziah, was kidnapped from her village in Senegal, shipped to Massachusetts, and sold as a slave. Her owners, the Wheatleys, decide to rename her, educate her, and encourage her writing. Eventually Phillis amazes America when she becomes the new nation’s first published black poet. This entertaining book is well researched but heavily embellished with fiction; at the end the author reveals what did, and did not, actually happen. It does provide insights into slavery, New England colonial life, creativity, and even romance.

Perfect for: Teens interested in early American history, particularly the Revolutionary War and slavery, and those interested in poets and poetry.

Find Hang a Thousand Trees with Ribbon: The Story of Phillis Wheatley at your local library.

Seven-year-old Jeanne Wakatsuki and her family were removed from their California home in 1942 and imprisoned in the Manzanar internment camp, a humiliating “desert ghetto.” More than 110,000 other Japanese-Americans suffered the same fate after Pearl Harbor because of national fears they would aid the new enemy. This poignant memoir offers delightful child’s eye details and insights on life in the camp. Even with barbed wire and armed guards, there were still sock hops, sports teams, and cheerleaders. However, the story recounts the family’s difficulty in rebuilding their lives after the war, the narrator’s awkward experiences attending an all-white school, and the disintegration of Japanese traditions in the family.

Perfect for: World War II aficionados, those interested in the Japanese-American experience during the war, those seeking a different perspective and angle on the time period.

Find Farewell to Manzanar at your local library.

Rousing chronicle of the most violent uprising in the history of Latin America. In 1910 the Mexican Revolution broke out, with peasants, workers, and political reformers collaborating to overthrow the dictator, Porfirio Diaz, in only six months. A bloody decade of turmoil followed, as generals, ex-bandits, agrarian radicals, and wealthy oligarchs fought for control. More than 1 million Mexicans died in the chaos, and the nation’s economy was destroyed. But the revolution successfully imposed the largest redistribution of land in the hemisphere’s history. Major characters in the conflict are presented in this concise but thorough account —Emiliano Zapata, Pancho Villa, Francisco Madero, Alvaro Obregon, Venustiano Carranza, and Victoriano Huerta (“The Jackal”).

Perfect for: Anyone interested in Mexican history or fascinated by revolts for social reform.

Find The Mexican Revolution at your local library.

Engrossing account of John Wilkes Booth’s 12 days of flight after assassinating President Lincoln. Aided by multiple co-conspirators, the killer eludes his pursuers in Washington, D.C., Maryland, and Virginia, until he’s finally surrounded and shot to death in a burning barn. Offers hour-by-hour reportage, with period details, and in-depth analysis of the murderous team’s motivations. Amazing, little-known facts are presented, such as Lincoln’s vice president and secretary of state were also targeted, and the original plan was to kidnap Lincoln. Archival photographs and abundant quotes from witnesses and relatives of the conspirators make the story more robust.

Perfect for: Civil War buffs and kids interested in a chase story, a thriller, a procedural drama.

This fascinating portrait of Benedict Arnold provides insight into the brilliant, heroic Revolutionary War general who switched sides to become America’s first and most hated traitor. The story is packed with heart-racing battle scenes, bizarre twists of fate, and objective, intriguing explanations for Arnold’s betrayal. It paints a picture of a great man flawed by greed and ego.

Perfect for: Kids fond of adventure stories, “bad guy” biographies, and the birth of the United States.

Find The Notorious Benedict Arnold: A True Story of Adventure, Heroism & Treachery at your local library.

This biography of Mohandas K. Gandhi examines his dedication to liberating India’s 350 million people from British colonial rule. It looks at his nonviolent (satyagraha) philosophy, his non-materialism, his concern for the poor, his education in England, his formative experiences in South Africa, and his numerous arrests, demonstrations, and hunger strikes. How he influenced later activists such as Nelson Mandela and Martin Luther King Jr. is also discussed. The book does not ignore criticisms the revered Mahatma received; for example, Gandhi’s wife remained illiterate all her life, and his sons claimed they were under-educated.

Perfect for: Anyone interested in social activist leadership, nonviolence as a philosophy and activism tool, and those interested in India’s history.

This is an exciting chronology of the violent combat in Southeast Asia, from French colonial rule and the rise of Communism to the Tet Offensive and the Fall of Saigon. Antiwar riots in the U.S. are addressed, plus intriguing details are included on “tunnel rats,” Agent Orange, and the participation of women on the battlefield. Shocking statistics are presented: for instance, the U.S. Air Force dropped 6.2 tons of bombs on the small nation, almost three times the total bombs they dropped during World War II. Personal anecdotes from GIs and Viet Cong give a deeper look at the period, as do profiles of leaders (Ho Chi Minh, President Richard Nixon, Gen. William Westmoreland). Plus the book includes photographs, maps, a glossary and a bibliography. It is an accessible, articulate introduction to the “most unpopular war in U.S. history.”

Find 10,000 Days of Thunder: A History of the Vietnam War at your local library.