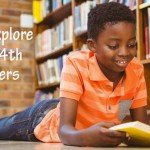 Books that explore feelings for 4th to 5th grade

Did you know building your child's vocabulary can help academically as well as socially? Use these books to explore a range of feeling words with your fourth and fifth grader.

Coraline’s world is full of frustrating things: her boring bedroom, her dad’s bad cooking, and the fact that everyone mispronounces her name. Rain frustrates her too, because when it rains her mother won’t let her go outside. One especially rainy day she has nothing to do so she explores her new house and discovers a world much like her own, only better. Coraline is thrilled at first, until she learns that this new world is full of dark secrets that threaten her family and her future.

Want to see the movie? Young or sensitive kids may find the deliciously creepy 2009 adaptation to be a bit too frightening.

Perfect for: Kids who like the thrill of being scared.

Find Coraline at your local library.

A Wrinkle in Time

Meg, an awkward girl who doesn’t quite fit in, has a lot to worry about. Her beloved father has suddenly disappeared, and neighbors are beginning to gossip that he’s run off with another woman. It turns out that his disappearance is connected with his scientific work, and Meg, her brilliant little brother, and her friend Calvin set out to find him — a search that takes them on an exciting but dangerous galactic adventure.

Want to see the movie? Check out the 2006 adaptation, which dramatizes the struggle between good and evil, or the new release coming spring 2018.

Perfect for: Kids who like science fiction and fantasy.

Find A Wrinkle in Time at your local library.

This beautiful novel will help kids understand what it’s like to be that kid — the one everyone stares at, laughs at, and avoids. Auggie Pullman has a facial disfigurement so extreme that he wore a toy astronaut helmet to preschool. He was homeschooled until fifth grade, but now he is going to regular school, where he encounters both cruelty and kindness. The book will remind readers how much courage it takes to be different — and how essential it is to be kind.

Want to see the movie? Check out the 2017 adaption featuring Julia Roberts and Owen Wilson as Auggie’s mom and dad.

Perfect for: Kids who are different.

Find Wonder at your local library.

A Long Walk to Water

This book, based on a true story, juxtaposes the experience of two young people facing extraordinary challenges. Nya, who lives in Sudan, must walk two hours twice a day to fetch water for her family. Salva, who is also Sudanese, ran away from his village when rebel forces attacked it. He walks days in search of refuge. Salva ultimately ends up in the U.S., where an American family adopts him. When he goes back to Sudan to help his people, he builds a well that helps Nya, too.

Find A Long Walk to Water at your local library.

Muhammad Yunas, who grew up in Bangladesh, conceived the idea of microcredit when he encountered a young woman who needed to borrow just twenty-two cents for her crafts business. Since banks wouldn’t lend such a small amount, she had to pay loan sharks high interest. Yunas realized he could make a positive impact in the lives of the poor if he developed a system that allows people to borrow small amounts of money at low interest rates. This book tells the true story of an enterprising man who changed the lives of millions.

When Catrina’s new neighbor, Carolos, says there are ghosts in their new town, her little sister, Maya, is excited to meet one. But Cat is frightened. Cat’s family has just moved to Bahía de la Luna, a coastal town in Northern California, because Maya has an incurable lung disease and her parents hope the sea air will help her breathe better. As Day of the Dead approaches, Cat faces her fears for her sister’s sake. This fantastic graphic novel deals with complex, real-life issues of fear and loss in an engaging comic-book style.

Perfect for: Brave and sensitive kids.

Find Ghosts at your local library.

Delphine, 11, and her two younger sisters don’t know what to expect when their dad puts them on plane to visit their mother, who abandoned the family years ago. It is 1968 and their mother is active in Oakland’s Black Power movement. The girls hope to visit Disneyland, but instead, their mother sends them to a camp run by the Black Panthers. As the summer wears on, the sisters learn about themselves, their mother, and their country during a pivotal moment in African American history. Delphine both blames and longs for her mother, and in the end these two strong characters find a measure of reconciliation.  If this is your child’s first exposure to historical fiction, she may be hooked.

Perfect for: A glimpse of 1968 Oakland from a child’s point of view.

Find One Crazy Summer at your local library.

The Invention of Hugo Cabret

Hugo is an orphan who tends the clocks in a Paris train station. He lives a lonely existence in the shadows of the station, stealing food and dodging the Station Inspector. One day he encounters a flinty old man who has even more secrets than he does. With the support of his friend, Isabelle, Hugo discovers the key to his past and the old man’s — and both find a measure of happiness. This powerful story is beautifully illustrated to create the pace and visual effects of a movie.

Find The Invention of Hugo Cabret at your local library.

Terabithia is a secret kingdom that Jess creates with his friend Leslie in the woods outside her house. The two retreat there to vanquish giants and zombies, and to escape the tedium of school and the cruelty of classmates. In Terabithia, it doesn’t matter that Jess’s family is very poor, or that he and Leslie are considered losers at school. But one day an accident changes everything and Jess has to deal with the pain and permanence of loss.

Want to see the movie? The 2007 adaptation sensitively covers the mature themes in the book, including the death of a main character.

Find Bridge to Terabithia at your local library.

In the Year of the Boar and Jackie Robinson

Shirley Temple Wong is excited to come to Brooklyn from her native China and eager to fit in. But she doesn’t know any English, so her first weeks in her new country are lonely and sad. Then she discovers the Brooklyn Dodgers, and Jackie Robinson, the first black man to play in America’s major leagues — and Shirley slowly begins to feel at home in her new country. A humorous, touching look at the immigrant experience.

Perfect for: Kids who like to learn about immigrants.

Find In the Year of the Boar and Jackie Robinson at your local library.

Are You There God? It’s Me, Margaret

It’s not easy to be a tween, as Margaret finds out when she moves to a new town and has to start all over again. She’s happy to join a secret club organized by some of her new friends, but uneasy when the subjects include embarrassing topics like bras and periods. Margaret finds some comfort in her frank and frequent conversations with God. In this brave, honest character, Blume deftly captures the worries and self-consciousness of a girl on the brink of adulthood.

Perfect for: Tweens and teens who struggle with adolescent issues.

Find Are You There God? It’s Me, Margaret at your local library.

Almanzo Wilder wants a horse, but his father believes he is too young to train and care for such a delicate creature. He’s thrilled and eager to prove himself when he gets two calves to train — but managing these stubborn creatures turns out to be more tricky than he expects. The book, based on the childhood of Wilder’s husband, provides a close up look at the hard work and simple joys of life on a family farm in early America.

Perfect for: Kids who like to read about life on the farm.

School is about to start when Evan gets news no kid wants to hear: his younger sister, Jessie, is going to be in his class this year. Jessie is such a good student she’s skipping a grade, while Evan struggles as a student. But Evan has his own strengths: he is better at feelings and understanding people. The two channel their competition into a savvy and hard-nosed struggle over who can create the most successful lemonade stand. A refreshing look at sibling rivalry — with a marketing twist.

Perfect for: Kids who has sibling rivalry.

Find The Lemonade War at your local library.

The Revolutionary War is breaking out when 13-year-old Isabel and her sister Ruth, who are slaves, are sold to new owners: a cruel couple who sympathize with the British. When Isabel is approached by rebels and asked to spy on her owners, she decides to take this risky step to gain freedom and to find Ruth, who has been sent away. The book underscores the complex social forces that sustained the cruel system of slavery — even as the American colonies fought for freedom.

Find Chains at your local library.

Mary is an orphan who is angry at the world when she arrives at a forsaken mansion on the British moors. As she slowly discovers the secrets of the mansion, including an invalid cousin, an abandoned garden, and a family’s sad history, she begins to hesitantly open her heart. She shows her cousin the garden and his ecstatic encounter with nature is as healing for him as it has been for Mary. The young people flourish along with the garden, as the lonely mansion becomes a loving home.

Want to see the movie? Check out the 1993 adaptation featuring Maggie Smith as Mrs. Medlock.

Find The Secret Garden at your local library.

It’s 1958 in Little Rock, Arkansas, when two girls form a friendship that places them at the center of the battle over school desegregation. Marlee is terrified to speak in public, until she meets Lizzie, who encourages her to find her voice. But local officials have refused to comply with federal desegregation orders, and Lizzie is suddenly forced to leave school because she is part black. The girls cling to their friendship, despite threats and simmering violence, and Marlee learns the importance of speaking up for what you believe even in the face of her own terror.

Find Lions of Little Rock at your local library.

When Winnie Foster is kidnapped she’s terrified at first, but she soon realizes her kidnappers, the Tuck family, are kind people with an astonishing secret. The Tucks will never die, which turns out to be less of a blessing than one might think. The situation — and Winnie’s choices — grows complicated when a stranger shows up, hoping to profit off of the spring water that made the Tucks immortal. A gentle but powerful reflection on mortality, and on what constitutes a meaningful life.

Want to see the movie? Check out the 2002 adaptation, in which the character Winnie is 15 instead of 10.