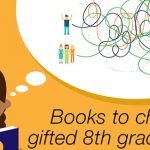 These stories delve into questions of identity and self-awareness in a way that will inspire your eighth grader to consider who they are and who they want to be.

In this young adult novel, Jinsen is bullied because of his dragon T-shirts, shaved head, and his religious lifestyle. Justin becomes his partner in a class project and starts to see Jinsen differently. Standing up for Jinsen complicates Justin’s life and his position in the social hierarchy of high school.

Perfect for: Kids who like realistic stories with a message.

Growing up in America, Gogol Ganguli chafes against his unusual name and his Indian heritage. Determined to forge his own identity separate from his Bengali parents, Gogol changes his name, moves to New York, and begins dating Maxine, a white woman from a wealthy background. But as he and his parents grow older, Gogol is increasingly drawn to his past, even as he continues to search inside himself. Teens and young adults will connect with Gogol’s quest for independence and sympathize with his complicated, well-expressed feelings about his parents’ expectations for him.

Want to see the movie? Check out the colorful 2007 adaptation, which follows two generations of the Ganguli family.

Perfect for: Teens exploring their identities.

Find The Namesake at your local library.

Kaffir Boy: The True Story of a Black Youth’s Coming to Age in Apartheid South Africa

Mathabane’s autobiography is testimony to living in a brutal, bigoted society. Intended for older readers, this story informs first-hand about the unpredictable attacks and sheer madness of Apartheid and a government that is now, fortunately, historical. The author eloquently rises above the suffering inflicted by the secret police on his family and friends, giving readers a story that powerfully portrays personal ingenuity and courage.

Find Kaffir Boy: The True Story of a Black Youth’s Coming to Age in Apartheid South Africa at your local library.

This witty, 18th-century satire on European behavior was written as a series of tongue-in-cheek traveler narratives. Lemuel Gulliver is shipwrecked first on an island of tiny people, the Lilliputians. Subsequent voyages take him to a land of giants (Brobdingnag), to a country populated by talking horses (the Houyhnhnms), and other fanciful locations. Thematically, Swift explores the idea of utopia via topics such as family planning, education, and communalism versus individualism.

Eleanor Roosevelt: A Life of Discovery

Eleanor Roosevelt’s inspirational life is examined, from her unhappy childhood to her marriage to her fifth cousin to her years as First Lady to her multiple contributions to the United Nations. Her maturation from an insecure, orphaned young girl to an eloquent humanitarian and activist for peace, justice, racial equality, and prosperity is emphasized in down-to-earth prose that matches the subject’s straightforward personality. The intimate portrayal also discusses Eleanor’s reaction to FDR’s infidelity and her encouragement for him to stay in politics despite his polio disability. Diary entries, 140 photographs, newspaper articles, and abundant quotes complete the story.

Perfect for: Readers who like to see women rise to success, those who are socially conscientious, and those needing a female inspiration.

Find Eleanor Roosevelt: A Life of Discovery at your local library.

With a new spin on a taxing subject, the authors group concepts into accessible topics: “Old School,” “Hot Stuff,” “Wave Gang,” “Light Crew,” “Atom Family,” “Nuclear Heavies,” and “Electric Cuties.” This book covers everything from gravity to the theory of relativity. As with the others in this series, the writing is lively and not afraid to get weird.

Find Physics: Why Matter Matters! at your local library.

Al Capone and the Roaring Twenties

America’s most notorious gangster thrived in the wild-and-loose atmosphere of the Prohibition Era. This entertaining biography of Al Capone (1899-1947) — aka “Scarface” and “Public Enemy #1” — tells the story of a strong boy with huge fists who joined his first criminal organization in Brooklyn after sixth grade. By age 26 he was a Chicago gang leader; he became a national celebrity for his skill at bootlegging (smuggling alcohol) and taking out rivals with machine guns. Eventually he was captured by FBI agents and subsequently imprisoned — but not for murder. The lifestyle of the Roaring ’20s is examined, with attention given to iconic inventions such as the Model T and the vacuum cleaner. It includes black-and-white photos and website references.

Perfect for: Fans of the Roaring ’20s, those curious about this period that heralded a modern age, and kids interesting in biographies of “bad guys.”

Find Al Capone and the Roaring Twenties at your local library.

Rebecca Rowell Randall is a young, impoverished farm girl who is sent away to live with her two dour, proper aunts in Riverboro, a tiny town in Maine. The joyful, imaginative heroine makes dear friends, charms the villagers, excels in school, and surmounts all obstacles with bubbling cheer. This is a lovable characterization of a relentlessly optimistic girl with an upbeat ending: Rebecca gains financial independence, enabling her to support her destitute family.

Perfect for: Teens who could learn a little about the power of optimism.

Find Rebecca of Sunnybrook Farm at your local library.