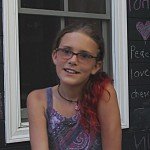 It all started when Vivienne saw a picture of two boys her own age, both slaves, carrying rock slabs the size of their bodies. She told her parents she wanted to do something to end child slavery. Read Vivienne’s story, Empathy’s poster child.

“You don’t have to be afraid to do things. You don’t have to be, like, you don’t have to be… You don’t have to hold back, you don’t have to worry about what other people think. Just don’t let people get you down, if they say “oh, that’s really stupid, that’s dumb”. Don’t let them say that, just be like “Well I think it’s amazing.” I just say “Well, that’s what you think, but I’m not going to stop, because I believe in it.” You can’t take things personally. You have to just let it go. I’ve been really afraid, yeah. But I just take a deep breath, and say “Just have courage.” It’s really important to believe in yourself, when you’re afraid, and just say “You can do this, you can get help from whoever you need — Just do it.” People love you no matter what, because you’re doing it, and you have the courage to actually be out there and be doing this stuff. So, it’s really quite amazing how much people support you, when you’re afraid.”