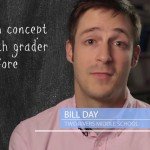 “When my sixth graders leave my classroom ready for seventh grade, I want them to have mastered the concept of a ratio. I want them to know that a certain amount of one quantity is fixed and corresponds with a different a different amount of a different quantity. When we work with a ratio like 15 meters to three seconds, I want them to be able to take that ratio and scale it down by dividing down to five meters per one second. I also need them to scale it up from 15 to 30 meters per six seconds. That ability to move between different ratios is really important for moving into the seventh grade, and then into the eighth grade where we study constant rates of change.”

See what it looks like when a sixth grader works with ratios.

Check out some of the other math skills sixth graders should master.