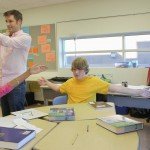 Bill Day was the 2013-14 Teacher of the Year in Washington, D.C. He teaches sixth and eighth graders individually and in groups.

“One thing that parents might be surprised at is, the prevalence of group work in math classes that follow the Common Core. Historically one of the knocks against the American mathematical education system is that we teach students to do algorithms; to take two numbers and add them, or to take a triangle and use the Pythagorean Theorem, absent of meaning. We don’t know why we’re doing it; we don’t know how it’s used outside of the classroom. Working in groups on meaningful tasks, is a way that we can communicate to students how important it is to be able to justify and explain yourself to others, because once you leave the classroom and you’re actually a practitioner of math out in the real world, you need to convince others that your ideas are right. You need to be able to justify them, you need to be able to know, when do I take a measurement out on the street and how do I turn that into a variable in my equation. If I am the only person talking, and I’m calling on single students, I only get as many arguments and reasons as I’m able to talk with over the course of a class. Whereas if I set up my classroom where I’m able to have students interacting with each other, we get a multiplier effect of how many students are making arguments, how many students are adding these reasons. The added benefit is, I get to frame my students as the evaluators of those arguments. I want students to not only think of the right answers being right because I’ve said it, I want them to weigh the arguments that their classmates are bringing to them and decide for themselves: ‘Does this make sense? Does this convince me?'”