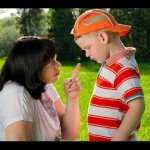 Setting limits. Shutting down a boisterous game. Telling your kids no.

It can be tough to disappoint or anger your children, says psychologist Madeline Levine, but discipline is an important part of parenting.

Video transcript: "Parents have two jobs – to love their kids and to discipline them. And disciplining means setting limits. And we’re on the wrong track when we think it’s all about nurturing and love – that’s the warm, delicious part of parenting. The really tough part is you pull the plug on a game, or you say, ‘You can’t go out,’ or, ‘You don’t get the keys this weekend because you did something,’ and your kid’s furious at you. OK. You’re the grown-up. They’re in process of developing. You have to be able to tolerate their anger. Okay? It’s hard. It’s so easy, you know, when they’re grown and out of the house to offer all this opinion. But I do think that’s a huge issue. I think moms, because they have — my next book is on moms — I think, because they have so little support in the community, and the community is so competitive, that mothers have very little support outside the family. And so the kids become their go-to people. And your go-to people, you don’t want really pissed off at you all the time. So you avoid conflict with them."