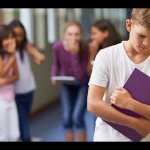 The rates of violent victimization in schools is going down — yet bullying rates are up. Sticks and Stones author Emily Bazelon explains the typology she came up with to describe today’s bullies and how they differ from bulllies of the past.

Video transcript: "I have kind of come up with a typology – because I think there are different types of kids. So the type of bully that most adults are most familiar with from our own childhood is the kid who punches you in the face and takes your lunch money. Like the bully in the movie Back to the Future or the 80s movie My Bodyguard. Schools have actually had a fair amount of success in addressing this kind of bullying. So when you look at the rates of violent victimization in school, you can see that the numbers are really receding and going down, and that is a good story. It also signals that there is a kind of generational shift going on. And that the types of bullies our kids are dealing with are different than the kinds of bullies we often confronted, which I think it’s important for parents to remember. So another type that actually – probably in contradiction to what I said – crosses over, is the kid with the deeper psychological problems. And often these kids are both bullies and victims. They get called “bully-victims” in the literature. And they’re the kids for whom this is really like a cry for help because they’re just having a great deal of social struggle. And so sometimes they lash out. And sometimes they are on the receiving end. But either way, it’s this sort of desperate attempt to succeed socially that’s really misguided and it’s failing and usually making them feel badly as well as the kids for whom they are causing problems. And then, I think, there is another type of bully, which I think it’s like the mean girl or the mean boy — harder for adults to spot, often like socially adept and charming — and more the child who is being mean kind of under the radar and harder for school to deal with. You can’t have a rule against eye rolling, right? And so you have kids who in small ways are making other kids feel excluded or feel badly. And the kids who are acting like bullies are doing it because in their environment that’s how you rise socially. And these are often the kids who go online a lot and are very involved in social media and know how to use those tools as weapons against other kids. Sometimes that means they leave behind a trace and adults actually can see what they are doing. So there’s that sort of silver lining in that kind of behavior. But because the cyberbullying goes on outside of school, it can make victims feel the sense of pervasiveness in the kind of 24/7 that I don’t think we dealt with when we were growing up. And that’s another shift that I think parents need to be aware of."