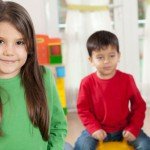 Advertisement
Parenting » Health » Putting the stand back in understanding

Putting the stand back in understanding

Some classrooms are approaching the problem of childhood inactivity from a decidedly new angle. Instead of putting children through their paces in gym class or packing evenings with organized sports, some educators are testing the idea of building natural movement directly into the learning environment. In Minnesota kids in “active classrooms” sit on physio balls instead of chairs and use desks that can be adjusted for standing as well as sitting. Another research project on standing desks began in 2010 in Idaho Falls with the Idaho National Laboratory.

Based on the ideas of Mayo Clinic researcher James Levine, these classrooms take advantage of the power of non-exercise activity thermogenesis, aka NEAT. According to Levine, NEAT is the primary means we expend energy (even for devout gym rats) and a great way to get kids to be more active. Check out this slide show.

In one 2009 study, researchers measured children’s energy expenditures and academic performance in an active classroom (principal researcher Beth Lewis at the University of Minnesota has not yet released the results). Although the data on calorie burning and test scores is still pending, Marine Elementary principal Lynn Bormann, whose school in Marine on St. Croix, Minn., has implemented active classrooms, told the New York Times that she’s already seeing positive results in terms of fewer sick days and referrals to the office.