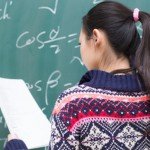 Is your child being tracked in math?

The answer is likely yes – even if you don’t know what track your child’s on, where it’s leading, or what it means for your child’s education.

Imagine you have twins starting middle school. Excitedly looking over their fall schedules, you see one child’s taking General Ed Math, the other Honors. How different are these classes?

The answer: maybe much more than you realize.

Many middle schools in America offer different math classes, with various labels like honors, general ed, basic. By high school, there can be a bewildering array of classes. (Some districts have already begun to rename math classes based on Common Core Standards, adding even more edu-speak to the mix.) According to a 2008 study by University of Michigan’s Promoting Rigorous Outcomes in Mathematics and Science Education (PROM/SE), which looked at 30 area high schools, researchers found the number of math courses offered ranged from 10 to 58. Further complicating the matter is a laundry list of similar-sounding courses. Faced with a lineup of Algebra II, Algebra II General, Enriched Algebra II, Integrated Algebra II, Advanced Algebra II, and Essentials of Algebra II, it’s difficult to know what’s right for any one child.

The paradox of all these courses with their similar sounding names is they can put students on strikingly divergent academic paths.

What is math tracking?

Unlike European “streaming,” in which high school students are openly routed to vocational or college-prep courses or schools, math tracking in the U.S. starts younger and is subject-based, so a student may be in remedial math but regular English. Because it’s less overt, and parents are often not brought into the decision-making process, many parents don’t understand the long-term implications for these decisions until it’s too late. A student’s math track tends to be based on their prior year’s course, test scores, and grades, but other factors can come into play. For instance, savvy parents may lobby to get their child into a higher math track. Tracking differs from differentiated learning or ability grouping, which happens within classes and is most commonly seen in reading groups in elementary school. Math tracking — dividing kids into different math courses based on their prior performance — can begin as early as sixth grade and is widespread by eighth grade. Although there are cases of children bumping up or down a level in math, most often the word track is an apt metaphor: once students are placed at a certain level, they remain there until graduation.

About 75 percent of U.S. students are tracked in math, according to a report from Brookings’ Brown Center on Education Policy. Tracking isn’t new — the majority of U.S. students have been tracked in math for the past two decades. In the early 1990s, tracking came under fire. Studies showed that students placed on lower tracks tended to be disproportionately minorities and from lower-income families and ended up faring poorly academically. Critics denounced the practice as another systematic way of contributing the achievement gap. As a result, far fewer students were tracked in most subjects. But the decline in math tracking was insignificant — and it didn’t last. After a minor decline in the mid- to late-1990s, math tracking rebounded in early 2000 and persists now.

According to the University of Michigan report, tracking can play out in a few ways: “Two students in the same school may take substantively different courses (e.g. basic math, algebra, geometry vs. geometry, advanced algebra, pre-calculus) and take different versions of these courses (e.g. Basic Algebra vs. Algebra I Honors).” In other words, students may also choose to take anywhere from one to five math classes in high school with varying degrees of rigor — all while meeting their graduation requirements.

These different choices, say the researcher, can lead to “prodigious differences” in math education. But often students don’t discover this reality until they land in college. Successful high school students are graduating and getting into college only to fail placement tests and land in remedial math classes. According to a May 2011 report by the Alliance for Excellent Education, in 2008 an estimated 44 percent of students at community colleges and 27 percent of students at public four-year colleges needed to take a remedial course. Shockingly, according to one survey cited, 80 percent of these students maintained at least a 3.0 GPA in high school.

“We know the phenomenon exists,” says Tom Loveless, Brookings Senior Fellow and the author of the think tank’s 2013 report on tracking. “There are kids coming out of high school who’ve taken so-called advanced classes — algebra II, trig, pre-calculus — and they get to college and place into remedial classes.”

What math track is this?

Ensuring that your child’s not funneled into remedial classes takes time and research. “Try to peek under the hood to see what they’re teaching in those courses,” Loveless says. Start with a math teacher to get the lowdown on what different math courses cover. Then ask the crucial question: where do each of these classes lead? Find out what doors are opened — or closed — based on each math class.

But do your own research, too, Loveless advises. If your child is planning on college, look into the math requirements for the colleges — and majors — your child may attend. Once you identify the sequences that should prepare your child for college, your job is only half done.

Though many parents ignore (or deplore) test scores, they can be an invaluable measure of your child’s true ability in math. “There may be some indicators,” Loveless says, “like when a student has A’s and B’s but terrible test scores. Parents sometimes will say, ‘My child’s just a bad test taker.’ That’s just a copout. The more likely explanation is the student isn’t mastering the material but is still getting a good grade. If a student is persistently under-testing compared to their grades, the parent should be concerned that student won’t perform well in college,” he explains. He’s referring to low SAT, ACT, and AP test scores — or, in states where they’re offered, end-of-course exams. Low scores on any of these math tests are, “a yellow flag, a cautionary signal,” he says.

One of the most crucial questions for educators (as well as parents) is whether to push algebra in eighth grade and it is one that has split experts for years. Montgomery County Public Schools tracked their students through college and published their findings in a report called the “7 keys to college readiness.” One key element is taking algebra in eighth grade and earning a C or higher. Despite this finding, multiple state initiatives, and a presidential push for more students to take Algebra I in eighth grade, both Loveless and Erik Hanushek, an education policy expert and senior fellow at Stanford University, say struggling through in eighth grade algebra does more harm than good. While mastery — think A’s and B’s and high end-of-course scores — of algebra in eighth grade is a strong indicator of college and future success, forcing an unprepared child to take algebra too early can have dire consequences because early algebra introduces the foundational concepts for all higher math. “It’s not going to help to squeak by in eighth grade algebra,” Hanushek says. “That’s not going to set [a child] up for success in advanced math options.”

“Parents should be attuned to whether or not their kids are properly placed in math,” Loveless says. The two worst-case scenarios, he says, are an eighth grader struggling in algebra or a child of any age who is bored — spinning their wheels with material they’ve already mastered. Rather than worry about your child being tracked permanently lower in math, Loveless says it’s better to move your child back to a class where they can really learn fractions in preparation for Algebra I — and then excel in Algebra I in ninth grade, which he notes isn’t too late for admission into California’s U.C. system. In the second case, parents should ask a series of questions: show me what you’re doing right now, show me that you can do it easily. “If they don’t know the material and can’t do it — that’s not misplaced, that’s just teenage boredom,” Loveless says. But if your child demonstrates easy mastery, it’s time to look for something more challenging.

The main point, Loveless says, is to be on the lookout for your child being misplaced in math. Be open to the options — up or down — with the awareness that each choice can have long-term implications. As society grows ever more dependent on technology, math skills have become increasingly crucial even for routine office work and factory jobs. If your child wants a broad range of college and career options, advocating for the very best math education doesn’t mean you’re being pushy, just practical.