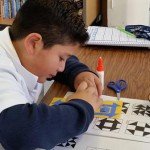 Until recently, 11-year-old Sinai dreamed of playing pro basketball. Now, he also imagines becoming an artist. What makes this shift so surprising is that until last year, the dark-haired, serious fifth grader had never done art. At home he had never finger-painted, colored in a coloring book, or drawn chalk pictures on the sidewalk. His school had offered no arts and crafts either – no Play-Doh, painting at an easel, or making collages with dried macaroni and glitter.

“Before, we didn’t have art and we weren’t creative. Now I want to come to school,” says Sinai, a sixth grader at Taft Community School in Redwood City, California.

When Robyn Miller became principal three years ago, Taft had no art classes.
Despite its proximity to the gated grand estates of Silicon Valley, nearly three-quarters of Taft’s 500 students are eligible for free and reduced price lunch. Like thousands of schools serving predominantly low-income, African American and Hispanic children, Taft eliminated the arts to balance shrinking budgets years ago.

If arts education were simply an extra, like a pretty picture hanging on a classroom bulletin board, then losing it could be written off as just another regrettable fiscal reality. But recent studies show that arts education builds a critical cognitive bridge between acquiring knowledge in school and putting it to use in the real world.

“Art isn’t memorization, it’s a way of thinking, and creativity is often a significant component,” explains James Catterall, a retired UCLA education professor and founding director of the Centers for Research on Creativity. “It encourages asking questions, it encourages taking some risks, and it encourages collaborative work.”

Having art in school is valuable for all students, but research suggests it’s especially critical for low-income children whose parents can’t afford to take them to museums with hands-on art activities or pay for after-school art classes at the community center. These children are often deprived when it comes to artistic activities that teach them a different way of thinking than what they are exposed to in their academic classes.

Miller wanted to restore art at Taft, but the school didn’t have the money to hire a credentialed art teacher. She found an affordable alternative in Art in Action, a non-profit organization based in neighboring Menlo Park, which had been implemented successfully in her previous district.

Schools pay a $200 licensing fee, about $10 per student per year, for each class that uses the program, which focuses on visual arts. For that, they get access to online curriculum with 12 lessons each for Kindergarten through eighth grade. Thanks to a network of thousands of parent volunteers who teach art in their children’s schools, the organization keeps its costs down.

“With this program, we’re getting volunteers who have been trained (and have) the passion and excitement to bring to the kids each week,” says Miller. “We’re giving (students) an opportunity to explore creatively and have their imaginations soar and be innovative, maybe even in solving problems.”

She says Art in Action supports these connections because its lessons are aligned with the new Common Core standards in math, reading, and writing, and can be tailored to fit the curriculum in all other subjects from history to geography.

Math and the Underground Railroad

She holds up a small square of pink construction paper and demonstrates how to fold it into four and then into 16 equal squares.

As the students fold their own paper squares, Haussler tells them about the African American artist Faith Ringgold, now 85-years-old, who is best known for her quilts depicting stories of race and racism. Ringgold’s work was influenced by quilts made by slaves in the South that had coded symbols sewn into them.

The kids are rapt as Haussler describes how slaves would hang the quilts on fences as if they were drying laundry, but they were actually signposts guiding runaway slaves to freedom in the North.

The high cost of cutting art

When kids are engaged in high-quality arts education, “not only is there a difference between how they act during art classes and lessons, but it seems to spill over to more engagement in school generally,” says Catterall.

The stats on the importance of arts education confirm Catterall’s observations. Schools with dynamic art programs have higher attendance rates, stronger morale, and better test scores than other schools, according to a 2011 report from the President’s Committee on the Arts and the Humanities.

Catterall’s 2012 analysis of students at high-income and low-income schools with and without arts education found that, across the board, students at schools with strong art programs do better in nearly every respect.

The benefits are especially significant for poor children enrolled in arts-rich schools. Twice as many attended four-year colleges or universities, compared with poor kids at schools without much art. And they were three times as likely to earn a bachelor’s degree. They were also less likely to drop out. Perhaps unsurprisingly, low-income students from arts-rich schools were found to be more engaged overall — more involved in sports, clubs, and volunteering, and more attuned to current events.

When teacher Judy Sleeth founded Art in Action in her child’s school district in 1982, arts education had been decimated in California by Proposition 13, the 1978 ballot measure that led public schools to lose billions in funding almost overnight. Today, Art in Action reaches about 50,000 students in more than 200 schools in 19 states, from California to Florida. Over the next three to five years, the program plans to nearly double the number of students it serves. But not all agree that organizations like Art in Action are the best way to get arts education into schools.

“We would never want to see an outside arts or culture organization replace an arts teacher,” says Doug Israel, director of research and policy at the Center for Arts Education, which advocates for professional art teachers in every New York City Public School. Ultimately, however, Israel says Art in Action and similar programs are “a benefit for students and better than no arts.”

Teachers are keenly aware of those benefits. At Taft, fifth grade teacher Jessica Kwa says she’s already planning to use the Faith Ringgold lesson when they start working on fractions.

“It’s definitely easier for them to have something to refer back to,” says Kwa.

Art also has something of a transcendent effect on her students, some more than others. She recalls a boy named Joel who missed homework and disrupted class. Art in Action changed him.

“I was surprised because I hadn’t seen him so meticulous with any work before,” says Kwa. “I immediately jumped on that opportunity to praise him, recognizing his strengths.”

When he got stuck on concepts in math and started to give up, she would refer to art class to remind him of his capabilities. Over time, Joel made those connections instinctively. He became more focused in class, turned in his homework on time, and his grades improved.