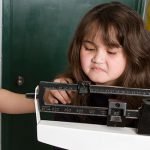 Weighty issues: the big problem no parent wants to discuss

One in three American children is obese, and this generation of kids is expected to have a shorter lifespan than their parents. Learn how and why you should talk to your child about weight, and what you can do to keep your child healthy.

When Cindy Morris was 3, she was put on an anti-seizure medication by her pediatrician. A side effect of the medication, which the toddler was given for six months, was an increased appetite that caused Cindy to gain a whopping 30 pounds — a potentially dangerous jump in body mass for a preschooler.

“I could not satisfy her hunger, so I just kept giving her food,” says her mother, Melissa Baldan-Carpenter, then a single mom living in North Carolina. “And they weren’t necessarily the best choices — things like hot dogs and chips — whatever I had in the house. She was always starving.”

Baldan-Carpenter raised concerns about her daughter’s ballooning girth with the pediatrician, who assured her that the situation would correct itself once Cindy stopped taking the medication. He cautioned against restricting food — a practice that can backfire and lead to more overeating.

Baldan-Carpenter followed the physician’s advice and decided to wait it out, reassuring her child that as she got older she’d begin to thin out. But that never happened. Cindy continued to carry excess weight through elementary school.

Fast forward to February of this year and the 142 pound, 5 foot 4 inch, 11 year old, whose family now lives in San Diego, went shopping to find an outfit for her mom’s upcoming wedding. Cindy was too large for dresses in the children’s department, but didn’t have the bust to fill out any outfits in the junior section. She went home sad and disappointed.

It was after that shopping trip that Baldan-Carpenter, who’d recently begun educating herself about healthy eating, sat down at the computer and ran her daughter’s numbers through a body mass index (BMI) calculator.

Cindy, she was shocked to discover, was technically obese. (Note that BMI numbers are interpreted differently for children and adults. Find out more about your child’s BMI and what the numbers mean.)  Baldan-Carpenter vowed to get her daughter the help she needed. “It was painful realizing how bad things had gotten,” she says. “I knew I had to do all I could to help her get to a healthy weight.”

The scary stats on childhood obesity

During the past three decades, obesity-related health complaints such as high blood pressure, elevated cholesterol, and type 2 diabetes — conditions once considered the exclusive domain of adults — have also increased at alarming rates among children. A recent study reveals that type 2 diabetes in particular is soaring among teenagers. Researchers analyzed data on  teens ages 12 to 19 and found that, among the teenagers surveyed, the number with diabetes or prediabetes increased from 9 percent in 1999 to 23 percent in 2008. The chronic condition can lead to serious medical conditions, including heart disease, stroke, blindness, and nerve damage.

Studies show that most overweight children remain overweight as adults. Still worse, if a child is overweight before age eight, she’s more likely to be obese in adulthood. Some obesity experts say this may be the first generation of kids with a shorter life expectancy than their parents because of obesity-related diseases. Income and ethnicity play a role: one out of seven low-income preschoolers are obese. In children ages two to 19, Hispanic boys and African-American girls are significantly more likely to be obese than white children. (Find out more about the link between poverty and obesity.)

The real cause of childhood obesity

What’s causing the obesity epidemic? On one level, the answer seems obvious, since for most people, excess weight results from eating too much and exercising too little. But in fact, obesity is a complicated problem with a number of possible causes — some of which we don’t fully understand.

In the past, weight control was considered a matter of limiting calories, but now many nutrition experts believe that overconsumption of sugars and refined grains is more to blame than too many calories.

Additional challenges to maintaining a child’s healthy weight are many and complex. High on the list is school cafeteria food, which all too often is short on nutrition and tall on sugar and empty carbohydrates. Little or no physical education or recess at school plays a part as well, as does the dearth of safe places to play near many children’s homes. Add to this damming list an increased access to sedentary screen pursuits; a relentless barrage of advertising and marketing from food companies pushing products high in fat, sugar, and salt; and a culture that frequently rewards children with pizza parties, sweet treats, and outings to fast food joints. What’s more, some unlucky children carry genes for fatness — genes that make them more predisposed to obesity, according to nutritionist Ellyn Satter.

Your child and obesity: how to identify a problem

A child is considered obese if his or her body mass index (BMI) is in the 95th percentile for her height and age. A child with a BMI in the 85th to 95th percentile may be considered overweight. If you want to find out your child’s BMI, visit your pediatrician, who will plot your child’s BMI on an age growth chart to obtain a percentile ranking. This screening tool can be used in children beginning at age 2. If there is cause for concern, your child’s doctor may also advise evaluation of diet and physical activity, family history, any underlying health or medical concerns, and a skinfold thickness measure.

A word of caution is in order if you’re worried that your child is too heavy. As any good pediatrician will confirm, children grow at different rates and times. Some kids carry so-called “baby fat” a little longer than others, and some pre-teens thicken up a little around the middle before puberty, when they may shoot up and turn into long, lean string beans. For these reasons, it’s important to have your child’s doctor explain weight gain in relation to your child’s growth during a physical exam.

How to address weighty issues with your child

If your health care provider confirms that your child does have a weight problem, it’s important to address it. A recent study found that parents find talking to children about weight more daunting than most other difficult topics — including sex. But not dealing with a potential problem can lead to a lifetime of unhealthy eating habits, yo-yo dieting, and poor body image — in addition to serious obesity-related illnesses.

How you talk about the subject is important, experts say. Keep the focus on healthy choices in terms of eating and physical activity, advises Dana Gerstein, a senior specialist for the University of California at Berkeley’s Center for Weight and Health. Gerstein recommends that all parents introduce the subject of healthy behaviors long before weight gain is an issue. And skip the labels. “We encourage parents to focus on talking about what’s good for your health and body and avoid terminology like ‘overweight’ or ‘obese,’ which can introduce shame into the equation,” she says.

If you’re concerned about your child’s weight, you need to be honest with your child, but you also need to be sensitive about how you raise the issue, adds Karen McGrail, assistant director of the John C. Stalker Institute of Food and Nutrition at Massachusetts’ Framingham State University. It’s essential to avoid shaming a child about weight, which can trigger an eating disorder or contribute to poor body image.

If your child raises the subject first, it could be a sign that she’s being teased about weight and you should find out exactly what’s causing the concern, Gerstein advises. Most schools today have anti-bullying policies, and your child’s teacher and school administration should be informed if your child is being teased or harassed. As a parent, your role is to provide emotional support for your child to discuss what’s going on, as well any accompanying feelings of embarrassment, shame, or fear.

While the language you should use with a toddler is less complex than you’d use with a teen, the basic premise is the same: keep the focus on encouraging healthy habits that can last a lifetime, says Gerstein. For children who are older — upper elementary and beyond — involve them by asking about their goals in terms of weight and health, McGrail adds.

Helicopter parenting tactics — nagging, bribing, shaming, negotiating — should be avoided at all costs, since they’re apt to make the problem worse. Likewise, it’s not a good idea to put your child on a restrictive diet unless medically indicated (if, say, your child has dangerously high blood pressure or elevated blood glucose) and then only under the supervision of a health professional. The focus instead should be on a balanced, healthy diet, including lots of vegetables and fruit, as well as lean protein and whole grains. Think apple slices rather than potato chips; milk or water instead of soda.

Is an occasional trip to the ice cream store OK if your child has a weight issue? Yes, says Gerstein, just don’t keep tempting treats at home or offer them on a regular basis.

How to avoid the biggest parental mistake

The biggest mistake parents make when dealing with childhood weight problems? Trying to change too much at once, says McGrail. “We recommend families focus on three things they’re willing to work on, which is more realistic than trying to change everything,” she says. Her top picks: eating (versus skipping) breakfast, eliminating sweetened beverages, adding some or more vegetables to the child’s diet, monitoring portion size, cutting down on snacks, and serving only healthy snacks.

Parents don’t have to go it alone. Baldan-Carpenter and her daughter attended a six-week program sponsored by Kaiser Permanente called KP KIDS (Kids in Dynamic Shape), designed to help families learn how to eat well, get more physical activity, and lose weight. Within eight weeks, Cindy dropped 18 pounds. Today, she weighs 118 pounds and has a BMI of 85 percent – down from 95 percent at her heaviest.

“She feels so much better — she’s not tired, can sleep, has more energy, is making friends more easily, has higher self-esteem, and is even doing better academically,” says her relieved mom, who packs her daughter’s lunch for school and camp to ensure Cindy makes healthy food choices all day long. “I learned the hard way that you can’t just ignore [weight problems] in your child,” she says. “It’s a medical condition — just like the flu or cancer — and you need to treat it to prevent it from damaging your child’s body and to protect her health.”