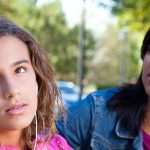 Advertisement
Parenting » Attention disorders, Learning disabilities » Controlling your emotions and behavior when your child is disrespectful

Controlling your emotions and behavior when your child is disrespectful

Learn how to stay cool and maintain a steady course when your child is pushing your buttons.

It is not always easy to keep your cool when a child is refusing to follow your directions — especially after a long day at work. But when you allow yourself to react emotionally, as Michelle’s father did, you are more likely to respond ineffectively — and even to make the situation worse. In this article, a very powerful system is described for learning how to control your emotions and behavior regardless of how disagreeably your child treats you. The approach is based on rational-emotive therapy (RET) which was developed by psychologist Albert Ellis, Ph. D., and has subsequently been elaborated on by many professionals, including Tom Miller, who studied under Ellis. Miller developed an innovative way to help people recognize and combat four common irrational thinking styles, which you’ll learn about in this article.

Most people engage in a variety of irrational thinking styles. An irrational thought is simply one that does not match the facts of a given situation. For example, a person who says, “I’ll never get into graduate school because I have low entrance exam scores,” fails to acknowledge the other factors considered in the admission process — grade-point average, letters of recommendation, and relevant past experiences. Ellis believed that irrational thinking styles stem from both heredity and environment. Miller considered that, of the many irrational thinking styles, four contribute most to the difficulty people experience controlling their emotions and behavior: “Demandingness,” “Awfulizing,” “I-can’t-stand-it,” and “Condemning and damning.”

The irrational beliefs you use to interpret situations have become unconscious through repeated use. Consequently, it takes a tremendous amount of conscious effort to combat them effectively. Doing so requires that you understand the two most important factors in making a fundamental change in your own behavior. You must be able to:

Gaining greater emotional and behavioral control first requires you to take a close look at how you experience events. Think about any experience you encounter as having the following four parts:

Although it may not be obvious when you’re angry or frustrated, you always have a choice about how you respond to another person’s disagreeable behavior. You can either:

Demandingness — how we get drawn in

Demandingness is the most difficult irrational thinking style to combat because the strategies for doing so go against social convention. But it’s worth rethinking these automatic reactions. Every time you allow yourself to become overly upset, you are, in effect, demanding something of others or of yourself. For example, you may respond to a child who tells you to “shut up” by saying to yourself in an indignant way, “He should not have told me to ‘shut up’.” or “He needs to be more respectful.” But, if you think about the facts of the event, these statements demand that the child change an action that has already happened, and over which neither of you has any real control. (Further approaches to dealing with children’s non-compliant behavior are presented in my article on strategies for managing resistance.)

However much you might wish to, you cannot turn back time so that the child was respectful and did not tell you to “shut up.” When you place these kinds of demands on others, you fail to acknowledge the reality of a situation. It is a futile attempt to change reality to the way you wanted it to be.

It’s often very difficult for parents to use demanding words such as “must,” “have to,” or “should” in a factual way to describe the reality of a child’s behavior. The reason is because, when people evaluate behavior, there’s a tendency to lump together the idea of whether we accept the behavior with the idea of whether we approve of the behavior. However, these two notions are actually separate from each other.

People tend to not accept a behavior if they don’t approve of it. However, it is possible to accept the fact that a behavior has occurred, without having to approve of it. For example, you may come home from work to discover that your child has spilled a glass of milk on the floor and hasn’t cleaned it up. The milk “should be” on the floor because it is. No amount of saying “It shouldn’t be there” or “He should have cleaned it up” is going to magically reverse time and put the milk back in the glass. To continue to do so simply wastes time, emotional energy, and the ability to respond effectively. You do not have to approve of it being on the floor to accept the reality of the situation. Once you accept that the milk “should be” on the floor, you can then figure out how to respond to it.

According to the American Heritage Dictionary, the definition for “must” is “imperative requirement,” “compelled to.” The word “must,” and the others above, indicate that there is no choice involved. Therefore, the rule for not engaging in demandingness is to test whether the “demanding words” that pop into your mind live up to their definition and match the reality of the situation. If a behavior is a “must” or “have to,” then there is no choice involved — you are compelled by forces beyond your control to do something. For example, dying is a must — we cannot live forever. Or, if we drop a pen or pencil, it must fall to the ground because of the law of gravity.

But, if you use demanding words when there is any choice at all, then you are engaging in demandingness. For example, if you say “I must be on time to work,” as you leave the house 10 minutes late, you are engaging in demandingness. The only thing you accomplish by repeating the word “must” is to keep yourself in a state of emotional upset that gets worse with every red light you encounter. So ask yourself, “Is it possible for me not to be on time?” The answer is yes. You may not like the consequences, but it is possible not to be on time.

Another way to test whether a situation offers absolutely no choice is to imagine using a non-demanding word to describe it: For example, you might try saying, “It would be “preferable” to be on time.” As silly as it may sound at first, when you actually say “It would be preferable …,” you automatically decrease how emotionally upset you become.

Other terms for awfulizing that you may have heard are “catastrophizing,” “making mountains out of molehills,” or “blowing things out of proportion.” Awfulizing is a logical consequence when you engage in demandingness. If you say that something should or shouldn’t have happened, your next interpretation of the event will be that it is awful that it did, in fact, happen. In order to effectively combat awfulizing, it is important to understand and accept the fact that bad (i.e., negative) things do happen to us.

To avoid awfulizing, put “bad events” into perspective so that you can prevent overreacting and respond rationally and effectively. The “physical injury scale” (below; adapted from Miller) is one tool you can use to combat awfulizing. The idea behind the scale is that when you are able to compare a negative event to physical injury — a tangible situation that we all understand and try to avoid — you will only get upset in proportion to the real unpleasantness of the event. If you train yourself to use the physical injury scale whenever you encounter a situation that you label as “bad,” you will generate a response within yourself that is logical based on the “badness” percentage you select.

So, for example, when a child tells you to “shut up,” you can place that event on the physical injury scale and ask yourself, “How bad is it?”, which you determine by looking at the scale and asking yourself: “How much physical pain would I be willing to trade to have prevented my child from saying ‘shut up’.” It’s a good bet no one wants to go higher than 10% (bruise). Therefore, you choose to keep yourself calm by telling yourself that the incident only warrants your being 10% upset, which leaves you with 90% of your rational thinking capabilities to figure out how to deal with the situation. This takes practice, so be patient with yourself while you’re learning.

Combating “I-can’t-stand-it” and “condemning and damning”

If you work first on reducing your demandingness and awfulizing, which are strongly interconnected, you’ll have an easier time controlling the other two kinds of irrational responses: The “I-can’t-stand-it” and “Condemning and damning.” When you say “I can’t stand this anymore,” you’re grossly exaggerating reality and increasing your chances for overreacting. As is the case with many demanding terms such as “must” and “should,” saying “I can’t stand it” is a fallacy. We are living proof that we have stood everything that has ever happened to us. Death is the only thing we cannot stand.

When you avoid irrational thinking about a child’s behavior, your level of emotional upset automatically decreases, giving you the emotional control to figure out an effective response. As a result, you’re less likely to feel hurt and disrespected, and to be overly punitive with your child. A child with challenging behaviors seeks the sense of power and control he gets when he can successfully “push your buttons.” Recognizing and combating irrational thinking styles will help you handle any disagreeable behaviors your child throws at you — and reduce the likelihood of the child “getting your goat.”