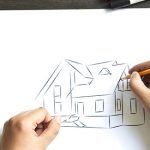 Undercover math: Have your tween design their dream house

In this math activity, your child draws his bedroom to scale and creates his fantasy home.

Suggesting that your middle schooler exercise his math muscles at home may not produce the rousing “Great idea — right after I take out the trash and reorganize the linen closet” you might hope. But this activity sneakily disguises hardcore academics in a kid-friendly fantasy of cool stuff, extravagant inventions, and a lifestyle without parental constrictions.

When you and your child share an idle hour, prompt him to design his own dream home. Encourage him not simply to design a nice or big house — but a home ideally tailored to his adolescent imagination. Is there a water slide running from the rooftop pool to the duck pond? A fireman’s pole instead of a staircase? How about a secret passageway between the kids bedrooms for late-night spying missions? Whatever his interests or hobbies, suggest your child incorporate what he loves into his fantasy dwelling.

The key to success with this project is that you give your child the graduated steps to build on his math facts and know-how. This gradual process will help him understand how math has practical applications, which, when seasoned with creativity, can produce unadulterated fun.

Step one: Brainstorm the dream house and its components. Make a final list of what the house has.

Step two: As a drafting warm-up, discuss how an architect uses math to draw up plans for a house. Explain that the plans need to be “to scale.” Have your child measure his bedroom and make a smaller version of it on paper. After measuring the length and width of the room in feet, he can use a scale of one inch to one foot and draw the perimeter of the bedroom to scale on graph paper.

Step three: Show your child some examples of drafting such as these floor plans from Math-Kitecture, a website with architecture activities for kids.

Step four: Have your child map out the biggest and most central rooms first. Ask him how large certain rooms are, how one enters from one room to another, and where the windows are placed. If the house is multilevel, make him create a drawing of each floor — from roof deck to basement video-game lounge! By the end of the project, he should be about to tell you the square footage of each room as well as the home’s total square footage. (If he designs round or triangular rooms, you may need to refresh your basic formulas for areas of different shapes!)

Step five: Put the drawing of the dream house on the refrigerator, and share the ideas with family and friends, encouraging your child to explain how he went about inventing and drawing his house to scale.