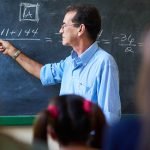 Your fifth grader and math

Fifth grade math kicks off with a limited look at the wide world of algebra.

Last fall results from national math exams stirred up a tempest in a standardized-test teapot. Opinions rained down in all directions. It turns out math scores rose more quickly before No Child Left Behind was implemented, and fourth grade math scores haven’t improved since 2007. As reported in the New York Times, the achievement gap remains a chasm between the haves and the have-nots.

What does this mean for your child? While pundits and politicians battle over the big issues, it’s up to parents to stay on top of the little ones: their own kids’ academic development. Keep tabs on what your fifth grader should learn in math this year with our grade-based milestones. Of course, math curricula still vary widely from state to state as school districts grapple with how to implement the Common Core Standards, so these are merely guidelines. For a better sense of how your child’s schoolwork compares, look up your state’s math standards, see what the National Council of Teachers of Mathematics recommends for preschool through high school, or read through the Common Core Standards for math.

What math concepts will your fifth grader learn?

Picking up where fourth grade math left off, the math your fifth grader learns will emphasize real-world problem solving. Not sure what that means? Try: figuring out how much paint would be needed to cover a classroom or the sale price of a video game that’s been marked down 60 percent. Or something even closer to home, like tracking his or her grade point average.

Long story short, your kid may learn more than one way to solve a problem, focusing on the process — not just the solution. Typically, students at this age work to develop an understanding of mathematics and engage in activities that require complex thought instead of just memorizing rules. Children may also work in groups to find solutions to tough math problems.

“I want students to discover mathematical concepts and relationships and to picture those concepts as they learn to recognize the connections between math and the world,” says Kathy Rank, Ohio’s 2005 Teacher of the Year.

Fifth graders build on the number sense they learned in previous years by working with numbers that range from very large (in the billions) to very small (in the thousandths) in the form of whole numbers as well as decimals and fractions. Number sense is the ability to understand numbers and work with them in a variety of ways, from doing mental computations to estimating to judging whether an answer seems reasonable.

Students also work with place value, learning, for example, that in the number 7,980.76, the 9 has a value of nine hundreds and the 6 has a value of six one-hundredths. They may be asked to compare similar numbers (such as 56,008 and 56,080) on a number line or with the symbols for greater than (>), less than (<), and equal to (=). They convert decimals and fractions as they learn to order and compare different types of numbers.

Fifth graders get a lesson in negative numbers by placing them on a number line or by applying them to real-world situations, such as an account that’s “in the red” or below-zero temperatures.

In fifth grade, students work with estimation and rounding whole numbers and decimals, which helps them with adding, subtracting, multiplying, and dividing large numbers. They may learn different estimation strategies to determine whether a solution seems reasonable and apply these strategies to estimate the amount of money needed for a shopping trip, for instance, or the population of a city.

Fifth graders add, subtract, multiply, and divide with decimals, fractions, and whole numbers. By the end of the year, they can typically multiply three-digit numbers by two-digit ones (638 x 42) and divide five-digit numbers by one-, two-, and three-digit ones (64,459/3, 64,459/11, 64,459/100) with and without remainders. They can also add and subtract five-digit numbers. A reasonable word problem for fifth graders is: John has $13.56. He needs to buy binders for school. If each binder is $3.50, how many binders can he buy? How much change will he have? (Answer: He can buy three binders and will have $3.06 in change.)

The properties of multiplication learned in earlier grades become increasingly important as students progress in their mathematical thinking.

A prime lesson in algebra

In algebra, mathematical relations are explored by using letters or symbols to represent numbers. Students use algebraic thinking to solve real-world problems with tables and graphs.

Fifth graders may take information from a graph or equation to answer questions about a problem. For example, a graph shows the number of chaperones needed for a field trip as one chaperone for every five students. Students would be asked to look at the graph and tell how many chaperones would be needed if X number of students were going on the trip.

In geometry, studying points, lines, shapes, and figures provides students with an understanding of the structure of space and spatial relations. Many fifth graders learn about the characteristics and relationships among points, lines, line segments, rays, planes, and shapes. Using a protractor, they measure right, acute, and obtuse angles. They also learn the properties of equilateral, right, scalene, and isosceles triangles.

“Geometry is a part of everyday life for many professionals,” says Wendy Miller, the 2006 North Carolina Teacher of the Year. “Graphic designers, landscapers, and architects use geometry daily to express their creativity. Math is more than numbers. Math is a form of art when using geometry.”

Polygons are closed plane figures bounded by three or more line segments. Fifth graders construct and measure polygons with up to 10 sides. Using the formula a = lw (area = length x width), they find the area of a polygon; using a formula like v = lwh (volume = length x width x height), they find the volume of a prism. They may also label the diameter and radius of a circle and find its area and circumference.

Many students use graphs and coordinate systems to identify, locate, and plot ordered pairs of whole numbers. A coordinate graph is a grid with four sections with a horizontal x-axis and a vertical y-axis. Fifth graders may place points on a graph with a horizontal and vertical value. Graphing is a skill your child can use in other subjects, such as science and social studies, to present and interpret information.

Fifth graders work on measuring with accuracy, using metric and U.S. standard units. They learn whether to use a ruler, scale, or thermometer to measure length, width, height, temperature, weight, capacity, and depth. Students measure objects such as desks, books, and doors and solve problems involving elapsed time in seconds, minutes, and hours. They may also measure and convert temperatures in degrees Fahrenheit and Celsius.

Students interpret and compare information from circles and line and bar graphs. They generate survey questions, collect responses, and create an appropriate graph to display the data. They also learn to interpret and explain the data and identify the mode (the value that occurs most frequently), median (the midpoint), mean (the average), and range (the difference between the greatest and smallest values) for a data set.

Fifth graders may predict the possible outcomes of an event (such as tossing dice), display the results, and compare them to their predictions

How much should elementary school students rely on calculators? The issue has been debated by math teachers, university professors, and parents, but there is general agreement that calculators shouldn’t be a substitute for learning basic arithmetic skills. Talk to your child’s teacher about how they are used in his or her classroom. For a discussion on the pros and cons of calculators, check out Education World’s article “Educators Battle Over Calculator Use: Both Sides Claim Casualties.”

At the end of fifth grade, your child may be required to take a state math exam that measures student learning and progress. To find out if your state releases its test questions, search your state Department of Education’s website.