Your first grader and math

Laying a strong foundation: First graders learn about money, time, and measurements -- and that's not all.

Last fall results from national math exams stirred up a tempest in a standardized test. It turns out math scores rose more quickly before No Child Left Behind was implemented, and fourth-grade math scores haven’t improved since 2007. As reported in the New York Times, the achievement gap remains a chasm between the haves and the have-nots.

What does this mean for your child? While pundits and politicians battle over the big issues, it’s up to parents to stay on top of the little ones: their own kids’ academic development. Keep tabs on what your first-grader should learn in math this year with our grade-based milestones. Of course, math curricula still vary widely from state to state as school districts grapple with how to implement the Common Core Standards, so these are merely guidelines. For a better sense of how your child’s schoolwork compares, look up your state’s math standards, see what the National Council of Teachers of Mathematics  recommends for preschool through high school, or read through the Common Core Standards for math.

In the first grade math classroom

What math concepts will your first-grader learn?

You will notice a dramatic shift in your child’s development as he or she starts looking at the world more logically and understands cause and effect. When they are younger, children can’t readily grasp an adult’s perspective, but starting at age 6 or so, this changes.

“Math in first grade begins to connect the real world to the child’s point of view,” says Nicola Salvatico, the 2005 Pennsylvania Teacher of the Year. This shift will play a role in your child’s growing knowledge of math as well as facilitate learning opportunities at home, such as measuring ingredients for a recipe, counting change, or estimating how much time it takes to get to a destination.

Getting a feel for patterns and shapes

First-graders learn to sort objects by color, shape, and function and to recognize patterns. Your child should be able to sort a mixed group of blocks so that all the red blocks are in one group and all the blue ones are in another. If the blocks are placed on a table in a pattern — for example, red block, blue block, red block, blue block — he or she should be able to predict which color comes next and create another pattern with similar features.

Students also learn to distinguish two- and three-dimensional geometric shapes such as triangles, squares, cones, and cylinders. They also identify the shapes of items in the classroom and at home.

By the end of first grade, your child should be able to count to 100 by ones, twos, fives, and tens and have a sense of how big the number 100 is. He or she should also be able to begin counting at any number you choose between 0 and 100 and write the words for the numbers 1 through 12.

Your child will also be introduced to the concepts of more and less and work with simple graphs.

First-graders learn addition and subtraction facts with numbers up to 20. Students start moving away from counting objects (or “math manipulatives,” as they are called in school) to doing more mental math. Simple word problems are introduced, such as “If I have three marbles and give one to my friend, how many do I have left?”

Your child may learn about coins and their value and how different combinations of coins can add up to the same amount. The classroom may even feature a play store with a toy cash register (see “Top-10 Educational Toys” for a popular model), play money, and objects with price tags so that your child can practice counting money and exchanging items for money. After all, it’s never too early to introduce kids to financial literacy.

Standard measuring tools and units of measurement are common topics for first-grade math. Students may practice measuring using inches, cups, and quarts. They may also learn to read a clock face and tell time to the half-hour. 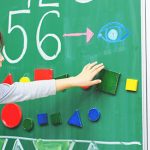