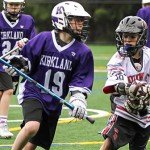 Advertisement
Parenting » Health » The 5 most dangerous sports for boys

The 5 most dangerous sports for boys

While team sports provide a wealth of benefits, some quite frequently lead to serious head injuries. Take precautions!

Because they are fun and good for them, parents often forget how dangerous sports can be for their kids. Every year, more than 135,000 children — from 5 to 18 — nationwide find themselves in emergency rooms because of sports-related injuries. The most common diagnosis? Traumatic brain injuries (TBIs), which are caused by blows or jolts to the head. They can disrupt the normal function of the brain. While TBIs can range from mild to severe, all should be taken seriously. The majority of TBIs are concussions, which is when the brain moves inside the skull and can even bang against the skull bone. This cerebral trauma can cause confusion, blurred vision, and memory loss. While team sports provide a wealth of emotional, social, and physical benefits for kids, it’s important to provide your young athlete with the proper protective gear and teach him to follow game regulations in order to avoid brain trauma and other serious injuries. These five team sports are the most likely to cause injury in young players.

These five team sports are not the only ones that put players at risk for TBIs and other serious injuries. Many other kids’ sports, including gymnastics and ice hockey, also have high concussion rates. To help protect your child from injury, follow the safety tips at stopsportsinjuries.org. And always insist on proper protective gear, especially during practice. Some 62 percent of sports-related injuries occur during practice, yet only one out of three parents reports taking game-day safety precautions for practice.

See the list of the 5 most dangerous sports for girls.