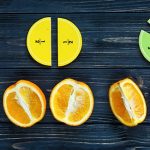 Here's a clever and tasty way to review fractions with your child.

In this activity your child uses fruit to learn about fractions.

To review fractions with your child, read a book about fractions such as Eating Fractions by Bruce Mcmillan, Ed Emberley’s Picture Pie: A Circle Drawing Book by Ed Emberley, Fraction Action by Loreen Leedy, Give Me Half by Stuart J. Murphy or Hershey’s Fractions by Jerry Pallotta.

Then take an apple or orange and cut it in half. Have your child put it together to show a whole, then one half and two halves. Reinforce how two halves make a whole. To extend the activity, cut the halves into fourths and do the same having your child put it back together to show a half, then a whole. You can then have your child eat a fourth or a half or a whole of the fruit. You can also extend this activity beyond food by having your child cut a paper plate into halves and quarters.