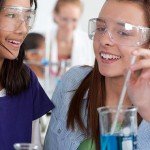 Getting our girls hooked on science

Much to my 12-year-old daughter’s dismay, I signed her up for an Expanding Your Horizons conference. The organization’s mission is to “encourage young women to pursue science, technology, engineering, and mathematics (STEM) careers… to meet 21st century challenges.” She wasn’t happy about it at all.

Like most teens, my daughter doesn’t relish new experiences — especially when they involve a bunch of people she doesn’t know and/or potential for embarrassment. Even less appealing, the conference was held early on a Saturday morning, and it sounded suspiciously like school.

As we approached the university hall where the workshop was being held, her pace slowed almost to a standstill. “Why are you making me do this?”  After she was signed in, she hissed, “Don’t leave!” and, “This is your dumbest idea ever!” When I finally left, her face was set in fury and she refused to say goodbye. I drove away feeling like a shoo-in for the Worst Mom in the World award.

But when I picked her up five hours later, she was electric with excitement, eager to tell me about making DNA bracelets, animal print books, and ice cream with dry ice. “Can I come again next year?” she asked.

That was a year ago. The conference is coming up again this Saturday and she can’t wait. Meanwhile, I stumbled on two recent news items that made me particularly glad that she’s going — and glad that I made her go!

One study from Women in Global Science and Technology and the Organization for Women in Science for the Developing World found the number of women working in science, technology, and innovation is “alarmingly low” in the world’s leading economies. According to the press release: “Despite efforts by many of these countries to give women greater access to science and technology education, research shows negative results.”

The areas of engineering, physics, and computer science are particularly bad: women make up only 30 percent of the student population in degree programs for these fields. Worse, the number of women actually working in these professions are declining across the board. Even in countries where more women are studying science and technology, it hasn’t translated into more women in the science workplace.

Study authors conclude that there are no simple solutions, but note that “in countries with government policies that support childcare, equal pay, and gender mainstreaming,” there are more women in STEM fields.

A personal perspective from Yale physicist Meg Urry helps explain — at least in part — the gap between women and men in STEM professions. Urry, the first tenured female faculty member in Yale’s physics department, describes her own experiences in a male dominated filed and cites Yale research that found, “….established scientists at top research universities — those choosing and training the next generation of STEM experts — unconsciously rate budding female scientists lower than men with identical credentials. They judge women less capable, less worthy of hiring and less deserving of mentoring. And they propose starting salaries that are on average 14 percent higher for men than for women.”

Findings like these make me realize how far we still have to go in terms of equality between the sexes, and the challenges our daughters still face.  They also underscore the importance of organizations like Expand Your Horizons, which give girls real-time, hands-on experiences with science and math.