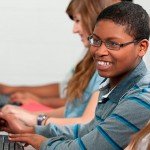 Is the best second language for your child to study Spanish, Chinese, JavaScript, or Python?

Coding languages are the backbone of our interconnected world. Here's why your kid needs to understand digital language — no matter what career they pursue.

Our children won’t be using Java, C++, Python, Ruby, or any of the other top 10 coding languages to chat with foreign strangers on trains in exotic locales. But these programming languages — used to develop mobile apps, analyze data, and perform other Internet business and marketing functions — may be the most important second, third, or fourth language your child will ever learn.

Learning computer science (CS) provides a golden opportunity in our children’s future employment prospects. According to the Bureau of Labor Statistics, jobs in computers and information technology are expected to grow 13 percent from 2016 to 2026, adding 557,100 new jobs. These positions currently offer a median wage of $86,320, more than double the average of $38,640 for all occupations. Computer jobs are appearing faster than U.S. schools are preparing people to fill them; today 557,100 of such jobs are open.

Of course, not every child wants a career as a programmer, but learning coding is a valuable life skill for everyone. The ability to create a website or app for a business is a marketable skill for people in a range of careers, from advertising and public relations to jewelry designers and gamers. And it’s exponentially prosperous: Apple earned $46.6 billion in apps in 2018, which is more than double the amount they earned from apps just three years prior in 2015. Though perhaps less profitably, coding skills can benefit accountants, administrators, journalists, and security and data analysts, just to name few.

Even knowing just a little coding can help reduce the fear of technology, opening a mental window to understanding and using tech skills more broadly. There’s also the argument, propounded by Steve Jobs himself, that coding “teaches you how to think.” Research from multiple universities indicates that using code develops parts of the brain associated with language processing, memory, attention, and logic.

Unfortunately, only 10 percent of U.S. schools currently offer computer programming classes, reports Seattle-based nonprofit Code.org. As a result, we have been trailing most of the developed world.

Why the U.S. deficit in CS?

With the U.S. as the birthplace of Facebook, Apple, Microsoft, Google, and umpteen other computer science-inspired giants, we should be pumping out computer scientists. But, we’re not. Why?

Nationally, little attention was being paid to CS at the time, by schools, teachers, and students. Take AP tests, for example. In 2014, students sat for 39,278 CS AP exams versus almost a million AP English exams. A survey by the Computer Science Teachers Association a decade ago found that the percentage of high schools offering CS classes dropped from 78 percent in 2005 to 65 percent in 2009, while the percentage of AP computer classes fell from 40 percent in 2005 to 27 percent in 2009. According to the survey there were multiple reasons for the decline — none of them reassuring — including lack of teacher subject knowledge, difficult subject matter, lack of student interest, and lack of staff support.

The good news is: interest in CS has immensely increased in high schools in recent years. In 2018, 135,992 students took the AP CS, a 31% increase from 2017. The number of African-Americans taking a CS AP exam increased 44%; Hispanic student participation increased 41%; female students taking the test jumped up 39%, and rural students spiked up 42%.

Unfortunately, US student interest in CS declines after 4-year college. American universities offer excellent STEM graduate classes, but the majority are filled with foreign students. A 2017 report indicates 79% of CS grad students in US universities are international students; this lopsidedness continues in related subjects like Electrical Engineering, where 81% are international students, and Mechanical Engineering, with 62% internationals.

Eight years ago, America started to wake up from its long CS slumber. In August 2011 came the launch of Codecademy. The site offered free coding tutorials and has attracted millions of students. On Jan. 5, 2012 Michael Bloomberg, then New York City’s mayor, tweeted his New Year’s resolution to learn programming. On Jan. 17, 2012, Douglas Rushkoff presented his essay, Why I Am Learning To Code and You Should, Too, in his CNN column. Interest exploded, with pundits and media everywhere wrestling with the new question, “Should everyone learn to code?”

Rushkoff, author of Program or Be Programmed, became a leading digital crusader and a spokesperson for Codecademy. He argued that schools in the U.S. need to “begin treating computer code the way we do the alphabet or arithmetic.” Rushkoff claimed there is such a dearth of skilled programmers in the country that firms like Google and Facebook buy entire companies simply to gain access to their code-literate employees. “If you know how to code, you can likely get a high-paying job right now,” wrote Rushkoff in 2012. “You will be enabling America to compete effectively on both the economic and military frontiers, where we are rapidly losing our competitive advantage due to our failure to teach ourselves code.”

Next, President Obama entered the fray. At Computer Science Education Week 2013 he urged youngsters: “Don’t just buy a new video game. Make one. Don’t just download the latest app. Help design it. Don’t just play on your phone. Program it. No one is born a computer scientist, but with a little hard work and some math and science, just about anyone can become one. … Just give it a shot.”

Today, Codeacademy has helped more than 45 million people learn to code, and it has dozens of competitors, including Khan Academy, Udemy, Coursera, ITProTV, and Pluralsight.

Across the nation, many school districts are elevating their attitude toward CS. In Chicago, every high school student must now take a CS class to graduate. Arkansas, led by governor Asa Hutchinson, has been a trailblazer in the student coding movement. In 2015 he passed a law requiring all high schools to offer computer science as a math or science credit, plus it provided free teacher training, coding competitions with cash prizes, equipment grants, and student awards for high scores on the computer science AP test. Iowa has set a goal that every high school students graduates with at least one CS class. Louisiana, Massachusetts, Texas, and Virginia, already give special diplomas to students who matriculate with specific computer science credits.

Oddly enough, California lags behind. Although 70% of principals regard CS as important as core academic classes, and 90% of parents want their kids to study computer science, only 32% of high schools offer CS classes, and the UC system failed to graduate a single new teacher prepared to teach CS in 2016.

The desire for CS classes is obvious. Code.org’s Hour of Code, a one-hour free tutorial in computer science, has served 813,614,108 students in over 180 nations. Their mission is to demystify coding and present it as an accessible subject. Surveys at a Florida high school retrieved after a recent Hour of Code indicated that 360 students were interested in taking computer sciences classes the following year.

CS for geeks and nongeeks

Are there high schools where you can enroll your adolescent geek in excellent computer classes? Yes, there are. Champions at the American Computer Science League 2019 contests include 2019 All-Star contests include Neuqua Valley High School in Illinois, Park Tudor School in Indiana, Barrington High School in Rhode Island, Brunswick School in Connecticut, Kalamazoo Mathematics & Science Center, and Legion of Learners in California.

Even if your child’s high school doesn’t offer any CS classes, you can still help your son or daughter learn what some have dubbed an essential 21st century skill. You can sign ’em up for immersive experiences such as InternalDrive’s tech camps, which offer more than 100 locations for kids ages 7 to 17. If these tuition prices are beyond your budget, free online options can be accessed at home, such as Khan Academy, MIT open courseware, Codecademy, and many others.

No matter how you do it, keep the ultimate goal in mind: your child’s future. How bright are the chances of future employment for CS specialists? According to the U.S. Bureau of Labor Statistics, in 2018 the average salary for software developers was $105,590 https://www.bls.gov/ooh/computer-and-information-technology/software-developers.htm and for computer and informational research scientists it was $118,370. https://www.bls.gov/ooh/computer-and-information-technology/computer-and-information-research-scientists.htm Job growth for each career in the next decade was an astronomical 24% and 19%. To stay current, check out the best programming language to learn in 2019. http://www.topprogramminglanguages.co

Finally, it’s worth remembering that not every child has what it takes to be a computer scientist. Not only are strong analytical and problem-solving skills essential, but it also helps to be detail-oriented and to have a crackerjack memory. Most importantly, before you engineer an education makeover for your child, make sure your child is as excited by the prospect as you are.

Still, everyone could use a demystifying lesson in basic coding — it’ll help in the long run.