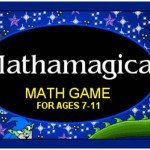 These guilt-free video games, software, and phone apps allow kids to indulge their gaming habits while pumping up their math muscles.

In the old days — you know, a couple of years ago — video games were the beeping, pinging distractions that got in the way of homework. Now iPhones, Nintendo, and the Web are homework. Recently the realm of edu-technology has exploded with a wide variety of mind-building games that do everything from teach basic money math to keep arithmetic skills sharp over the summer.

The proliferation of options has left parents with homework of their own: sorting out the worthwhile from the mediocre (not to mention the downright idiotic). In the weeks ahead, we’ll highlight some of the more promising high-tech products, starting with math:

Some of the best math games are the simplest, and so it is with Dino Numbers, a basic save-the-cows-from-the-dinosaurs game for 7- to 12-year-olds working on arithmetic. As with many of these applications, this one will look decidedly basic compared to, say, Worlds of Warcraft. But a crudely rendered tyrannosaurus can teach addition as well as anyone. Windows only; free download provides a trial version.

Hankering for more sophisticated play? Soccer Math, for kids 7 to 14, has downright impressive graphics and design for a series of free online games. Basic arithmetic, percents, fractions, decimals, and more are tested in this well-crafted software. Get the right answers and you’ll dribble past lifelike opponents, shoot on the goal, or bend it like Beckham.

The company behind Soccer Math created an offering for younger minds too. Penguin Cold Cash features, well, penguins and cold cash. Kids 5 to 11 learn the math behind money transactions as cute penguins surf through icebergs, catch fish, and try their flippers at ice hockey. Available for Mac or PC — on CD Rom! It’s been discontinued but it’s still out there, and still fun for kids. But free money math games, including solving real-life type problems, can be found at Math-Play. But no cute and funny penguins.

Of course, cool graphics are just one way to win the heart of a discriminating gamer. Valgetal, a simple Tetris-like math game, is as rudimentary and transfixing as the original procrastination tool — except that players strengthen their basic math skills as they control the falling blocks. For ages 7 to 11. Free download for PCs, with 20 levels.

At arcademicskillbuilders.com, several free and easy-to-use online math games await for kids  7 to 11. With titles like Alien Addition, Minus Mission, and Meteor Multiplication, these games enlist slime-blasters and UFOs in the review of basic arithmetic skills.

Personal Trainer: Math makes math practice portable with this collection of games and exercises for the handheld Nintendo DS. The “play” aspect of this game is more limited than with other options, but it’s habit-forming nonetheless. The game also tracks a player’s progress over time, so improvement can be easily measured. For ages 7 to 11.

Nintendo DS users can also blast their way to better basic math skills via the popular Math Blaster in the Prime Adventure, in which elementary-school-aged players save the galaxy through a series of colorful mini-arcade games. The multiplayer battle mode allows up to three additional players to compete against each other — so the game can become social as well.

Sheppard Software offers more than two dozen free online games for kids 7 to 14, from basic math operations to pre-algebra. These include the standard race-against-the-clock types of problem-solving as well as offerings such as Add Like Mad, in which players pick the two numbers from many whose sum equals a selected value. (The company also offers a handy daily pop quiz for a more pared-down, school-like approach.)

Math video games tend to involve boyish pursuits, be it shooting aliens or, well, shooting other things, and Mathamagica has a bit of that. But this collection of basic yet appealing mini-educational games for kids 7 to 11 also includes cute critters and pretty mermaids and fairies — a step toward appealing to girls, ostensibly. A tip of the tiara for that. Widows only.

Locked out of the house? That’s no excuse not to practice math! Anusen’s Math Magic brings basic addition, subtraction, and multiplication fun to the iPhone. For 99 cents, you get a simple, colorful game that’s augmented by iPhone neatnesss: After coming up with the right answer, shake the phone and another problem will magically appear. Now if only someone would create math-themed music to play on the headphones.