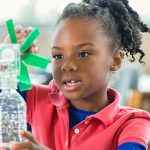 Sometimes educators assume that Black, Hispanic, or children learning English can't handle advanced schoolwork. Here's what parents can do to make sure that doesn't happen.

Keri Rodrigues has five children, all with different learning abilities, interests, and needs. Teachers have always considered her middle son, who is 11, as exceptionally bright. Says Rodrigues, “[They] have always come around to the idea that this is a brilliant little kid who is probably going to be an engineer someday, but the process has always been really frustrating.”

Rodrigues and her son, who is one of the only non-white kids in his class in Woburn MA, near Boston, were used to spending the first few months of every school year trying to convince his teacher that he is capable of doing more advanced work than he gets. But those discussions went nowhere.

Eventually, Rodrigues decided she’d had enough. Before third grade began, she collected her son’s work from the year before and had him write a paragraph about how he feels about math and science. She took pictures of his Lego architecture. She brought the portfolio of evidence to the teacher, who quickly realized that her son was ready for challenging work, saving them both the effort and heartache of convincing a teacher not to underestimate him.

When a teacher underestimates students of color

Rodrigues’ story is not uncommon, especially for families of color and immigrants. Studies show that Black, Hispanic, and immigrant students are more often underestimated by their teachers than white kids, which can result in lower self-esteem and missed opportunities that reverberate all the way to college and beyond. Parents may find the thought of dealing with the national problem of teacher bias overwhelming. But they can fight battles one classroom at a time, by arming themselves with examples of their child’s prior academic work, as Rodrigues did, while also advocating for their child.

Rodrigues, co-founder and president of the National Parents Union, says, “A lot of the time we assume that smart or gifted kids are going to do just fine,” she said. “We really have to think about how much talent and how much genius we’ve lost in our society by not making sure that these kids have access to opportunity.”

Young, gifted, and Black – and ignored

In the 1960s, a Harvard professor conducted an experiment to see how a teacher’s expectations of a student affected how well the student performed. What he found is that when teachers expected students to perform well, they were more likely to do so. The opposite was true when teachers underestimated their students. The groundbreaking study showed that student talent alone is not enough to ensure success. It requires a fair estimation from the teacher as well.

Research has shown that Black and Hispanic students are more likely to be underestimated than others. A 2017 study published in the Social Science Research journal found that English and math teachers were more likely to think their class was too difficult for students of color rather than white students, even after controlling for things like standardized test scores.

The research explored how teacher bias can affect students’ academic aspirations. The study also asked students how far they think they would go in education, including graduating from college and going to graduate school. These findings also yet another racial disparity.

“If you’re underestimated, regardless of your race, that’s associated with lower years of expectation,” says Hua-Yu Sebastian Cherng, who co-authored the study. “But it’s actually worse for Black and Brown students. It’s a double dam.”

It’s been known for years that underestimating the academic abilities of students of color can lead to some dropping out of high school, or being “bored out the door.” According to a Johns Hopkins study, these kids are “students who have generally been promoted on time from grade to grade and may even have above grade level skills but at some point become frustrated or bored and stop seeing the reason for coming to school. Once they reach the legal dropout age they leave.” Of course, the lack of academic challenge isn’t the only reason kids drop out. But being bored in school doesn’t help.

Another study out of Germany from 2018 found that teachers are also more likely to underestimate the abilities of migrant students than their non-migrant peers. “We know that students from multilingual households, in particular students of color from multilingual households, are often overlooked for academically rigorous coursework,” says Marguerite Lukes, Director of Research and Innovation at the Internationals Network for Public Schools, a nonprofit that partners with schools to serve immigrant and refugee multilingual learners. “Teachers often unwittingly conflate race, accent, and multilingualism with lack of intelligence, which is incorrect.”

Lukes says many schools disproportionately place multilingual students of color in special education classrooms or bar English language learners from taking more rigorous courses until they are deemed “proficient” in English, even if they are otherwise capable. The Internationals Network takes a different approach, placing students in rigorous classes regardless of their English proficiency.

Unfortunately, not all students end up with this opportunity. A 2020 report by Education Trust revealed that nearly a quarter million Black and Latino students aren’t enrolled in AP STEM courses — but should be. In many states, the gap between white students and students of color enrolled in advanced courses is staggeringly disproportionate. In New Jersey, for example, only 19% of Black students and 23% of Hispanic students were enrolled in AP or IB courses last year, compared to 41% of white students and 68% of Asian students.

So faced with these disparities, what can families of color do when they see school underestimating their child and want more challenging coursework for their kids. Here are some tips:

Know how the school chooses who gets the advanced classes

First off, learn what the school and district rules are for placing kids in gifted and talented programs, honors or Advanced Placement classes, and the like. Check to see if your school “tracks” students–putting all students at a specific learning level together in one classroom–or if kids at different academic levels are taught together. And find out if the school allows a partial move to a higher grade (a second-grader going to a fifth grade class for reading, for example) or if students can be pulled from regular classes for a period of academic enrichment. This knowledge will help you know what to ask for.

Keep your cool when asking for those classes

Even the best educators can be frazzled and overworked with routine work. Another parent complaint isn’t always looked upon fondly. So stay calm when you advocate for your child. Cherng, whose research was inspired in part by his own experience as a middle school math teacher in San Francisco, cautions parents to know what they are getting into before showing up to school. An engaged parent advocating for their child may be perceived, he says, as more problematic–particularly if they are Black.

Band together with parents who have the same concern

You can have more power when you approach the school with other parents. Lukes recommends finding other parents in the school who might have experienced teacher bias to present a united front. She did this for her son, who is Latino and bilingual in Spanish and English, when teachers underestimated him at his New York City school and refused to give him advanced work in Spanish class, which was designed for non-speakers. “It took some fighting, “ she says, “which was eye-opening and very sobering, especially as parents of non-Spanish-speaking children expressed some resentment that ‘those kids got special treatment.’”

Emphasize the benefit of stronger schoolwork for all kids

Always remind educators that kids don’t have to be top-of-the-class to benefit from tougher school work. Younger kids who learn how to work a bit harder in school will likely make academic strides because intelligence isn’t fixed, but develops with persistence and challenge. And in high school, for example, Black students who take an Advanced Placement course, but don’t earn college credit for it, are still better prepared for college than they would be otherwise.

Seek outside help if all else fails. Parents can reach out to advocacy organizations, like Advocates for Children of New York. The National Parents Union is also affiliated with over 600 community organizations made up of parents who have come together to solve an issue, and there are hundreds more across the country. It’s important to know you aren’t alone, whether fighting for G&T kindergarten or Advanced Placement Computer Science.

Parents of color, especially, should push for higher-level school work even before their kids reach high school. The soft bigotry of low expectations, as former president George W. Bush put it, is still alive and well. But the battle against it still isn’t easy.

“It can feel really scary to stand up and fight back,” Rodrigues says. “It can feel really big and massive and like you’re never going to get anywhere. But it is worth it. It’s critically important that your child gets the resources they need. The most important thing is not to give up, to reach out to other people and get that support and guidance from veteran mamas who have gone through this.”