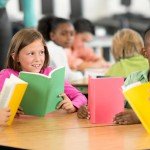 Why the student with disabilities sitting next to your child may improve his or her education.

When Bill Grundfest heard that his son’s kindergarten class in Bel Air, Calif., would include a child with a cognitive disability, he was concerned. He worried that this child would take up all of the teacher’s time, leaving the rest of the class twiddling their thumbs.

“In spite of good teachers being able to see out the backs of their heads, they only have a finite amount of time and energy,” he says. “One expects a disabled child to need more time and energy than a nondisabled one, hence less time for everyone else.”

In the tony Southern California school district, Grundfest kept his concern to himself, fearing that other parents would think him intolerant. But he fretted just the same, nervous that his son’s education would be a watered-down version of what he had envisioned.

The history of inclusion

Grundfest is not alone in his concern, of course. Many parents fear the effects on their own kids when a child with a disability joins their classroom. Some worry that the teaching will be geared to slower learners, some are wary of potential behavior issues, and others think that the resources to teach students with learning problems would be better directed at those without disabilities.

What research says about inclusive classrooms

However, studies show that typical students do not suffer when there is a child with a disability in the classroom. Deb Staub, a social worker in Seattle, found in her research — “On Inclusion and the Other Kids: Here’s What Research Shows so Far About Inclusion’s Effect on Nondisabled Students,” published by LeadScape — that the academic performance of typical students in an inclusive classroom was not adversely affected.

She points to a study that compared the instructional time in an inclusive classroom to that of a classroom without children with learning differences and found that the presence of students with severe disabilities had no effect on typical students. In fact, research has found that when children with disabilities are present in the classroom, all students benefit — both academically and in other ways that are harder to measure.

What inclusive classrooms do better…

Academically, inclusive classrooms afford an obvious boon. Additional staff dedicated to kids with learning disabilities lowers the overall student-to-teacher ratio. Smaller groups and more individualized instruction (a necessity for children with disabilities) usually means a boost for everyone in the classroom.

Some of the adaptations made for children with disabilities may benefit other students as well. A PA system installed for a hearing-impaired student helps the entire class hear the teacher better. A visual schedule that outlines the day’s plan turns out to be a great organizing tool for all students.

As for the harder-to-measure benefits, many parents report that their children enrolled in inclusive classrooms are more compassionate, have better social skills and higher self-esteem, and are more open to the needs of others. Staub’s research found that typical children in inclusive classrooms exhibited increased patience with slower learners and more ease with people with disabilities.

Such studies confirm what Grundfest observed in his son. Not only did his son accept his classmate with the disability without hesitation, but the boys became friends as the year went on. “He seemed to completely understand this kid’s limitations, but they were still buddies,” says Grundfest. “He was experiencing people who are different without thinking that they are less.”

“Our son seems to be growing up to be a kind and compassionate kid,” he adds. “And I think having a classmate with a disability was part of helping him become that.”

Grundfest, who like many adults did not go to school with children with disabilities, realizes that he had a vision of what his child’s education would look like and was thrown by the reality. “We expect that world will repeat what we experienced as kids, and that’s where we go wrong,” he says. “They are not you, and the world is vastly different.”

Seeing his son incorporate this classmate into his life with such little fanfare has turned Grundfest into an inclusion convert. “My views changed by learning from my own son,” he says. “He had zero discomfort around his classmate. As the song says: ‘You’ve got to be taught to hate and fear.’”

In an ironic twist, Grundfest now sees that he learned as much from the experience as his son did. “Someday I hope I can grow up to be like my kid,” he says.