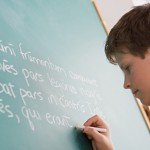 Why learn a second language?

In a world in which the benefits of learning a second language have never been greater, the way languages are taught is changing to meet the growing need.

Ask an American adult about whether she speaks a language other than English, and you’re likely to get an answer something like this: “I took French in school, but I can’t speak it.”

That’s no longer an acceptable response. Not to government leaders worried about the lack of Chinese or Arabic speakers in a post-9/11 world. Not to business leaders concerned about America’s ability to compete in the global marketplace. And not to the parents and students who understand the competitive advantage that knowledge of another language and culture provides.

This pressure to teach students to communicate in a second language has drastically changed methods of instruction in the best language programs.

“What a lot of Americans remember is language as an academic pursuit,” says Marty Abbott, director of education for the American Council on the Teaching of Foreign Languages. “They learned a lot about a language, how to conjugate every irregular verb. Today, the emphasis is on developing students’ communications skills — what they can do with a language. That’s a radical departure.”

But lots of students still aren’t getting this kind of language instruction. In most states, language class is an elective not required for graduation. Language teachers are in short supply nationwide. Language programs are in continual peril of being cut in financially strapped districts concerned about students’ test scores in reading and math.

Parents have a key role to play in advocating for expanded language programs, pressing for better instruction and supporting their children’s efforts to learn a language, language educators say.

How language programs have changed

Historically, language classes were taken only by college-bound students, and many took the minimum of two years that colleges required. They learned to conjugate verbs in Spanish, French or German, and most graduated from high school with just enough knowledge to pass written tests but not enough to carry on a conversation.

That is starting to change, as the need for fluency in more languages has increased, as technology has made more tools available to teach them and as researchers gain new insights into how children learn.

“We’re talking now about what is it we really want our students to do,” says Paula Patrick, foreign language coordinator for the Fairfax County, Va., public schools. “It’s no longer a check-off to college admission. It’s a tool for communication.”

“We have to think completely differently,” she says. “It’s proficiency, rather than just ‘seat time.'”

Who should take language classes?

Students with below-average test scores have often been excluded from language study. But research about the way language is learned contradicts that view.

Michael Bacon coordinates language immersion programs for public schools in Portland, Ore. Portland has a nationally recognized program in Japanese, as well as programs in Spanish and Chinese, with one beginning in the fall in Russian.

“Learning a second language should be for all children,” he says. “There is an assumption that it’s only the CEO or businessman who flies around the world needs it.”

“There is a well-documented cognitive benefit for learning a second language,” he says. “It’s not just about language. It’s about making a person a better thinker.”

Language skills are useful to people who never leave home. Police officers, teachers, nurses, business owners and many others will find language skills useful, whether they want to sell products overseas or work in U.S. communities that are increasingly multiethnic.

Research supports the practices of many European nations: Children learn a second language more easily when they are young. As a result, language immersion programs have increased in elementary schools. In these classes, children learn the content of subjects such as math or science in the second language.

But that doesn’t mean it’s too late for older kids to benefit from language instruction.

Learning a second language has been correlated with improved reading ability in sixth-graders, to improved scores on the ACT and SAT, and academic success in college for high school students.

Students who take classical languages, like Latin and Greek, benefit, too. Rachel Gordon, a sophomore at Barnard College, started taking Latin as a high school freshman after taking Spanish in middle school.

Gordon says she took Latin because she heard it was one of the best courses offered at her high school, Berkeley High School in California.

“It actually was helpful to me on the SATs,” Gordon says. “If I didn’t know the words, I could find the root. We learned Greek and Roman history, and that’s the basis of Western civilization.”

Gordon says this knowledge has been helpful in college. “In philosophy, architecture, the myths — it just always pops up. It’s not like you can use Latin when you go to the drug store. But I get a lot of references that other people don’t.”

Learning a second language can be quite difficult for students with some language disabilities.

American Sign Language, which is taught at many community colleges, is a visual, rather than written language that may be a good option. It’s increasingly become accepted for high school graduation and college admission requirements, but it’s important to check with your child’s counselor to find out if he’ll get credit for it.

Students with strong listening and speaking skills may find that Spanish with its predictable sound system is an option.

Many colleges require two years of a second language. But as the College Board notes, taking more language shows that a student is willing to go beyond the basics so they may prefer more. Check with your child’s counselor and the colleges he is interested in for more information.

If your student is interested in studying abroad while in college, he should research these programs as part of his college search. But the good news is that most colleges allow students to participate in other institutions’ study abroad programs, so most students enjoy a wide variety of options for foreign study.

How to evaluate a language class

A visitor to a high-quality language class is likely to see students working in pairs or small groups, using the target language. They might be asked to take turns composing a phone message they would leave if they were going to be late to meet a Spanish friend. Or they may be discussing an article they read on a Spanish newspaper’s Web site. The point is to give kids a lot of time speaking the language and using it for real-life purposes. The communication is more student-directed with lessons drawn from the Internet or real-life experience. The teacher speaks very little English in class.

“Students are given a lot of speaking time,” she says. “That means I have a lot less control of accuracy. It’s not about perfection, but can you say something comprehensible? I correct, but I correct by repeating back in the correct form.”

That doesn’t mean grammar gets left behind. Says Bacon: “Grammar is embedded within the lessons, rather than saying we’re going to conjugate Spanish verbs.”

Students no longer memorize artificial dialogues that come from a textbook but use the target language to learn lessons taken from real life.

For example, many nations use the 24-hour clock to tell time, rather than the 12-hour clock commonly used in the United States. Incorporating this into a discussion about telling time gives students cultural information, as well as speaking practice.

Students’ oral and written skills are regularly tested, but the tests aren’t the fill-in-the-blank type. That’s like having a piano teacher ask a child to play one note of a song, says Patrick. Better to ask students to talk or write about a real situation or a character in a story, educators say.

Students learn a second language best through context, research has shown. Seeing posters, newspapers or magazines in the second language; talking about the food; and listening to the music of a particular culture gives them that context. Video clips of native speakers can familiarize students with the gestures and other nonverbal communication clues commonly used in a particular culture.

Resources beyond the classroom

It takes a creative teacher to break through teen-age inhibitions, particularly for students who are getting their first experience trying out a new language.

“Think about how young kids learn,” Patrick says. “They love to babble and try out new things. When you’re an adolescent, you don’t get to babble or you sound silly. They don’t want to sound silly.”

Fortunately, there is a wealth of resources on the Web to help teachers and engage students, from anime (animation) and manga (comics) to teach Japanese to free daily podcasts from sites like www.chinesepod.com that students can use at school or at home.

Tom Welch is a former French teacher — and Kentucky Teacher of the Year — school principal and “director of seeding innovation” for the state’s Department of Education. Currently a consultant, he sees himself as a revolutionary who wants to redesign the learning process. He says teachers have to be willing to expand their horizons, to capitalize on the enthusiasm of the kids. And parents may need to push them to do so.

“Folks need to remember that it’s 2007,” says Tom Welch. “The Internet is an unbelievable resource. It’s not used much except to support a traditional classroom approach. The teacher needs to focus on learning a language for the students’ purpose, not the teacher’s purpose.”

“If you’re studying Mandarin and need help in biology, we have lots of ways of finding a tutor in China,” he says. “And you know what? It’s exactly 12 hours’ difference between where I’m sitting and China. If you want to work at 12 p.m. or 12 a.m., we can do that.”

“I see the teacher’s responsibility as being a ‘learning broker’ roping in as many people from around the world into that effort that I can find.”

Web safety is certainly an issue, Welch says, but he argues that it’s up to schools to teach responsible use of the Web not try to block it out of classrooms.

Still not sure how to tell if your child is really learning to communicate in his language class? Patrick recommends you visit the classroom and try this:

“Watch a child with a stopwatch,” she says. “In 50 minutes, how much did the child get to say? Ten seconds of speaking a day isn’t enough.”

The College Board started offering AP classes in Mandarin and the federal government is offering grants to increase the study of critical languages. Portland schools and the University of Oregon, for example, are developing the nation’s first Chinese language immersion program from kindergarten through college. But other districts are eliminating language programs to boost funding for subjects targeted by high-stakes tests.

It’s difficult to build and maintain language programs without grants and the strong commitment of school officials, parents and community leaders. There’s also a shortage of teachers, even in the languages most commonly spoken in the United States.

“Yes, a lot of people know Spanish,” Bacon says. “But we need highly qualified teachers who can teach to standards.”