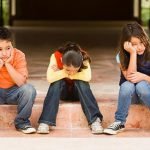 Advertisement
Parenting » Dilemmas, Emotional smarts » Why we should let our kids be bored

Why we should let our kids be bored

When her child complains, "I'm bored," this mom no longer suggests activities to cure the ennui. Here, she explains why those moments should be treasured.

“I’m bored!” This lament, coming lately from my 6-year-old, is new for her. Interestingly, this is around the age my son, who is now 14, would come to me issuing the same proclamation. I’d panic in response, frantically spouting off every possible entertainment I could think of: “How about painting a picture for Daddy’s birthday? Building a city with Legos? Throwing a stuffy tea party? Setting up your train set?…”

“No!” he would bellow. “That sounds boring!” Eventually, after collapsing on the couch with the overblown drama of a Greek thespian, he’d pick himself up and start something of his own — mixing a magic potion from kitchen ingredients, creating a spider’s web out of Scotch tape he’d stuck all over his room.

Now, as a more experienced (and exhausted) mother, I have an entirely new stance: boredom is good for children. (Why do adults almost never get bored?) Now when my daughter comes to me, looking for solace when she’s been laid low with a severe case of ennui, I say with all the tough love I can muster, “That’s great you’re bored. That’s when people have the best ideas!” Of course, she’s just as annoyed with my response as my son was when I’d offer suggestions.

I thought about this when I heard writer Jonah Lehrer being interviewed on NPR’s Fresh Air. Lehrer, author of Imagine: How Creativity Works, researched how people arrive at those “Aha!” moments. “The answer comes out of the blue… It comes in the shower, it comes in the bathtub, it comes under the apple tree…” says Lehrer.

In other words, it’s not when we’re “doing” something. The great idea comes, says Lehrer, when people have some downtime. They don’t come when they’re exhausted at work or tapping away at their phones. Instead, inspiration arrives when the mind is relaxed.

In our media- and screen-saturated culture, it feels as like we’re always doing something, we can always be entertained. It’s no coincidence that when my daughter is bored, she runs to find my smartphone. (I’m onto her now and keep it hidden.) So I do my best to let her suffer in her listlessness. I’m trying to give her a gift she may not appreciate in the moment: the boredom that leads to inspiration. What can compare to that?