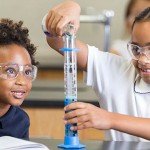 Advertisement
Parenting » STEM » Getting students of color hooked on STEM

Getting students of color hooked on STEM

The SMASH program, which has links to UC Berkeley, Stanford, and other top universities, strives to close the STEM achievement gap.

Juan Hernandez has had a life-changing summer. The 14-year-old math and science whiz got to geek out with like-minded kids for five weeks on the lush Stanford campus, learning about everything from computer programming to the infection rate of HIV.

Juan was among the 80 low-income, high-achieving students of color who are psyched about STEM and were chosen to participate in the SMASH program. SMASH stands for Summer Math and Science Honors Academy, and it’s part of the Level Playing Field Institute, a San Francisco-based nonprofit founded 10 years ago by Freada Kapor Klein. The enrichment program is held on campuses across the country, from UC Berkeley and Stanford to University of Michigan and Morehouse College, where SMASH scholars, as they’re called, come back every summer during their high school years for an immersive college experience. And during the school year, they get SAT prep support, college counseling, and financial aid workshops to make sure they stay on course.

If Juan and his peers are already high-achieving, ambitious students, one might wonder why they need an extra boost with this kind of program. They’re not exactly at-risk kids. Juan has a 4.0 GPA, takes AP classes, and has set lofty goals for himself. He wants to be a surgeon or a physicist.

But as driven as Juan is, his future is far from guaranteed. He must be admitted to a good college (his top choices are Stanford and Berkeley). He must secure financial aid or scholarships. And those are just the initial steps. Once he’s in, the level of rigor in math and science classes at top-tier universities can destabilize even the most determined superstar.