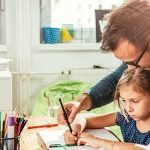 The dark truth about those big homework projects

They're supposed to be done by the kids. But all parents help, don't they?

“You have to write about cannibalism!” I fume at Zenobia, my fifth grade daughter. “Your teacher, your classmates, everybody wants to hear about people eating people.”

She’s constructing her big social studies report. Zenobia’s decision — all on her own — is to create a multimedia triptych on the Donner Party, the horror show where settlers get stuck in the Sierra snow, starve, and then snack on each other to survive. I am thrilled. My wife is the tutor in math, writing, science, piano, singing, Spanish… everything but history. That is Daddy’s domain.

“Don’t tell me how to do it,” my stubborn angel pouts. “You can help just a tiny bit but don’t boss me around.”

I know a distasteful amount about this historical event, and I am determined to share that knowledge with my daughter.

And I’m sure that at this very moment, most of the dads in my daughter’s class are crafting their child’s project into an A+. At last month’s science fair, my daughter entered a genius display of electricity in citrus fruit. I thought it was a sure-fire Alameda County winner, but no trophy came home. No blue ribbon, no scholarship to MIT. Our daughter’s project was totally overlooked, and out-done, frankly, by exhibits that look suspiciously like they were created by Tiger Dads who pulled all-nighters in an engineering lab to help their spawn win.

If other parents are helping, don’t I have to help to keep my daughter in the race for college?

Ironically, I have my own big project: a reported essay on how much parents should help with their kids’ big reports. I call Carol Dweck, Ph.D., at her Stanford University office. She’s a top-notch psychology researcher, and the author of Mindset: The New Psychology of Success. Frankly, I expect her to tell me it’s important for parents to assist their kids on complicated projects, which would give me a green light. But her advice is the opposite.

“Parents can be available as a resource,” Dweck says, “to discuss the nature of the assignment, be a sounding board for ideas, and reflect back to the children what they are hearing.”

“But that’s it,” she adds. “Helping too much with a big project sends a bad message that the child is not capable, and the child will doubt their own abilities. These are the kids who never gain confidence.”

So I shouldn’t encourage Zenobia to flesh out her report with meaty details? It’s hard to resist — she’s omitting the most interesting part of the story. Ignoring Dweck’s advice, I prod my daughter, “Your painting of the wagon train crossing the Wasatch Range is wonderful. But then… all you have for the final tragic weeks is a timeline… with meals excluded?”

Zenobia frowns as she glues a small tree on the horizon. “I’m reporting on westward expansion,” she sniffs in a patronizing tone. “The Donner Party was just like 500,000 other pioneers. Except for the eating.”

“Exactly!” I crow. “Don’t you want an A? This display of yours takes all the guts out of the story.”

The fine line between supporting and helping

Put off by my daughter for the moment, I return to my own project. This time, it’s “The Dad Man” Joe Kelly, author of six parenting books, who tells me to back off.

“It’s more important to ‘support’ your child than to ‘help’ them,” Kelly says. “Supporting them means listening to them, responding to the struggles they’re having, but not doing the project for them.”

Next, I ask the million-dollar question: “When does acceptable ‘support’ cross the line into forbidden ‘help’?”

Think of it this way, says psychologist John Duffy, author of The Available Parent, “Your child should always be the one in charge of their school projects and papers, acting as ‘general contractors’, so to speak. The parent is in the role of consultant.”

If you find yourself directing the project, you’ve likely crossed the line from supporter into helper — which, big picture, is no help at all.

But all the other parents are doing it!

Experts say kids should do these projects themselves. But I know other parents are helping, which creates a vicious cycle that many parents get caught up in — even if they later regret it. Erica Benson of Piedmont, CA admits helping her son with his big project in fifth grade, too. “He says he learned a lot,” she muses, “but I didn’t like it at the end. Too much me, not enough him.”

When I express my concern that other parents are helping their kids, “The Dad Man” Joe Kelly reminds me that the main point of these projects is learning. “What your child learns is more important than the grade they get.”

But many parents — like me — and like Alisha Allen of Henderson, NV, can’t pretend that grades don’t matter. “I also helped,” she admits, “because it’s three-fourths of her grade … I would love it if she gets an A. [If she got] a C, I would be disappointed.”

And what about parents — like me — being their child’s first and most important teachers? Don’t I have the responsibility as Dad to make sure my daughter receives the full benefit of my extensive knowledge of the Donner Party’s harrowing migration?

“Zenobia,” I offer, trying a new approach, “did you know many people in the Donner Party were so starved they became mentally ill and near blind?”

“Oddly enough,“ I continue, hopefully, “one child, William Hook, died — after he was rescued. He fatally gorged himself to death in Bear Valley.”

Finally, one of my teacher friends drives the point home: parent “help” can actually do more harm than good.

“I had students writing the entire essay in class to avoid parents helping too much,” Heather Poland, a retired middle school teacher in San Diego, CA, writes me via Facebook. I realize my daughter’s school has implemented a similar practice for essays.

Finally I get it. I’ve been part of the problem. I consider one of Dr. Divecha’s last nuggets of advice: children model their behavior after their parents. This means it’s supportive and valuable to show them how to structure and complete a project.

I glance over at Zenobia. Her concentration on her project is intense.

“I was assigned an article to write, Zenobia,” I say. “It’s a medium-sized project, for a grownup. To do the project, I researched online, I interviewed experts, I thought of an amusing structure. My approach connected me emotionally and personally to the assignment. I outlined it, I started writing it, I rewrote it, and just now, I thought of a conclusion, and… guess what, Zenobia?”