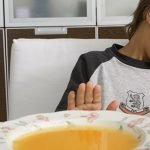 Dealing with a discerning diner

Do you have a picky eater? Here’s how to take the food fights out of mealtimes.

For every child who eats oysters, offal, and okra there are plenty of kids whose diet consists mostly of plain pasta, cold cereal, and French fries.

Parents of particular eaters can find mealtimes both a challenge and a chore. There’s concern, too, over whether a kid with a limited diet is getting all the nutrients needed for growth and development — especially in light of the recent collapse of a 17-year-old British girl who’d survived on an exclusive diet of fast food chicken nuggets since age two.

Doctors diagnosed the teen, who says she’s never eaten fruits or vegetables, with anemia; she is also being treated for nutritional deficiencies. Her mother, according to news accounts, has tried to get her daughter to eat a more varied diet.

So what’s a parent of a choosy chowhound to do? Nutritionist Ellyn Satter, author of Secrets of Feeding a Healthy Family and Child of Mine: Feeding with Love and Good Sense, has reassured thousands of stressed parents with her straightforward advice. Satter’s mealtime mantra: “It’s the parent’s job to plan meals, cook, and get dinner on the table,” she says. “A child is responsible for what, how much, or even whether, he eats.” It’s a concept, she says, that many parents have a tough time getting their head around.

Satter’s reputation for helping families handle eating issues is firmly rooted in what she calls her Division of Responsibility in Feeding philosophy. Serve food family style, she says, which leaves the decision about what gets consumed solidly in your child’s corner. “You make a variety of foods available — don’t limit the menu to only the food your child will eat,” explains Satter. “Take ‘no’ for an answer, and set the tone for a calm, pleasant mealtime environment without pushing or pressuring.”

Healthy meals consist mostly of a range of fruits and vegetables, lean protein, and carbohydrates (preferably whole grain). High-fat, high-sugar, high-calorie, and low-nutrient foods — such as sodas, sweets, and chips — are best kept as an occasional treat, not a regular mealtime feature.

Sounds simple enough, but any parent of a picky eater knows that most nights their child will nibble on a small range of acceptable foods. Food blogger Bettina Elias Siegel has chronicled her veggie phobic son’s refusal to eat any vegetables for six years. Six years. That fact doesn’t seem to faze Satter, who counters that the child will come around, likely in his teens, as long as he has repeated exposure and no badgering to eat his greens.

For parents who value a diverse diet and edible exploration — and who flinch when perfectly good food winds up in the compost bin — dinnertime can become a battleground. Debbie Koenig, author of Parents Need to Eat Too, documents her ongoing food fights with son Harry, 6, on her blog.

Koenig has resorted to tactics familiar to other parents of fussy eaters: bribing, rewarding, and cooking with her son in an effort to expand his edible universe. She recently revisited Satter’s strategies to put a stop to the culinary conflict in her home, which had escalated, she says, because of her own control issues.

Parents of multiple children offer perhaps the best evidence that parents should not take a picky palate personally — or as a sign of failure on the feeding front. “We’ve fed our kids all the same food and we eat a healthy, balanced dinner together almost every night.” says Elizabeth Ozer, mom to Sam, 16, Max, 14, and Emilia, 7.

“Our eldest had sophisticated tastes from a young age, with risotto a favorite before he could say the word clearly. Our middle child went through a phase where he’d basically only eat fried foods like chicken fried rice, and our youngest likes a variety of foods while avoiding others,” she adds. The family compromised by cooking fried foods at home in canola oil — a healthier choice than fast food versions — and always had other options available — such as salad — at every meal. It worked. “Today, our middle son eats salads, vegetables, and mussels, which are his favorite food,” says Ozer. “He still enjoys French fries — which go well with mussels — and he is a healthy, fit teenager who likes most foods now.”

Why all the food fussiness?

Some children are fussy because they are especially sensitive to sensory input, like the son of food writer Michael Pollan, author of Food Rules. As a youngster, Isaac would only eat bland, beige or white food as a way, his dad discovered, to reduce sensory input. Happily, most kids, outgrow such food aversions linked to this sensitivity, and Isaac has, too. The college student’s acute sense of taste guides him in the kitchen — and makes him a keen critic of others cooking, including his dad’s.

Pollan isn’t the only foodie father with a picky eater. In his book Hungry Monkey: A Food-Loving Father’s Quest to Raise an Adventurous Eater, Matthew Amster-Burton chronicles how, at an early age, his daughter Iris packed away pad Thai and spicy enchiladas, spinach and Brussels sprouts. Amster-Burton assumed it was because of his culinary skills and no-compromise approach to child feeding. Every seasoned parent knows how this story turns out: at age 2, Iris suddenly developed strong opinions about what she’d eat — mostly plain, white foods without any sauce — her dad’s preference for spicy food be damned.

Iris’s about-face didn’t freak him out: a limited eating range may frustrate parents but it’s not a medical problem, in the vast majority of cases, although there is evidence that picky-eaters tend to weigh less than non-picky eaters. (The case of the British girl who ate exclusively chicken nuggets was a medical issue, and one in which earlier intervention of some sort was called for. Also, some behavior dubbed “picky eating” may actually be a response to an intolerance or allergy to a food. If you suspect this could be the reason for your child’s choosiness, you should consult a pediatrician.)

Amster-Burton checked with another source — his mom — and discovered that for about seven years he only ate Cheerios, mac ‘n cheese, pizza, white chicken meat (if it didn’t touch anything else), and PB&J’s. Amster-Burton isn’t the first parent to pass on his particular palate. Research reveals that a child may well inherit food fussiness and fear of new food, according to a 2007 study published in The American Journal of Clinical Nutrition.

It’s frustrating to have a fussy eater when you’re the one responsible for putting a meal on the table that everyone in the family can eat. But rather than “hide” unfavorite foods (a controversial practice) or make two meals, Amster-Burton looked for way to satisfy his taste buds and his kid’s.

Hot sauce helped. And time. Now 8 years old, Iris is open to all kinds of tastes. “She likes scallions and cilantro in anything, and no longer cares about one food touching another, though she’s still not a fan of green vegetables,” he says. “I had nothing to do with this transformation; I just waited around until she got bored with white food.”

Most kids, Satter says, do outgrow their finicky food ways. Who knows, maybe the child with definite opinions about food will turn into a teen who cooks the family meal. A parent can dream.