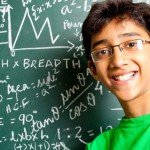 Advertisement
Parenting » Math » Is your child ready for college math?

Is your child ready for college math?

Help your high school student gain the necessary math skills to succeed in college and beyond.

Your high school student is on track to complete the math classes required by your state university. He may even have already passed the high school exit exam that your state requires. Does that mean he’s prepared for college math?

Of the students in the high school class of 2006 who took the ACT for college admissions, less than half tested at a level indicating they would earn a C or higher in college algebra, the ACT reported. In another survey, one released in 2005 by the national nonprofit Achieve Inc., college instructors estimated that half of their students were inadequately prepared to do college math.

A significant number of these students probably wound up taking remedial math once they got to college. That means it is likely to take them longer and cost them more to get their college degrees. Studies also show that they are at higher risk for dropping out of college altogether.

At a time when an increasingly competitive global marketplace has focused attention on the need for STEM skills — including math skills — and when students are taking more standardized tests than ever, how did so many students graduate so unprepared?

Some of them didn’t take enough math, some took the wrong math and some managed to pass the classes without learning the math. The high school exit exams many of them passed were designed to test 10th-grade skills, not college readiness.

The statistics are scary. They’ve prompted finger-pointing by educators and government officials, and they’ve also spurred the creation of programs aimed at improving students’ readiness for college math.

What do students need to know to succeed in college math?

Professor W. Stephen Wilson, who teaches freshman calculus at Johns Hopkins University and is also a former senior advisor for mathematics in the U.S. Department of Education’s Office of Elementary and Secondary Education, answers the question this way:

“Arithmetic. You really have to be able to add, subtract, multiply, and divide with pencil and paper, do ratios, propositions, and percentages, and work multi-step word problems that apply arithmetic.”

Then he ticks off the list of classes a college-bound student should take: “algebra I, geometry, algebra II and some trig.”

Your child needs math every year

Be sure your student takes algebra I and above — not business math, consumer math, or general math.

If your child took her first year of algebra in the seventh or eighth grade, she is likely to be able to fulfill minimum admissions requirements for all but the most selective colleges by the end of her junior year. The idea of taking a break from math in her senior year might sound pretty appealing.

“A year without math will make taking whatever math they have to take in college extremely difficult,” says Wilson.

Your child will not only miss out on a year of math instruction, but she’ll have a hard time passing a college placement exam if her skills are rusty. Placement tests have become a “hidden set of standards,” says Bill Moore, director of the Transition Mathematics Project, an initiative in Washington state aimed at getting more students better prepared for college math.

“Sometimes students are pushed too hard and too fast,” says Moore. “They rush through the curriculum, they take their senior year off, they take a placement test — and have to take remedial math.”

Does every student need to take calculus?

One major study suggests that Advanced Placement (AP) calculus is excellent preparation for students who are ready for it. While U.S. students overall ranked second from the bottom in the 2003 Trends in International Math and Science Study (TIMSS) test, AP calculus students ranked first in the world.

But that doesn’t mean high school calculus is right for every student.

“When we say take four years of math, people automatically think calculus because in many high schools, that’s all there is,” says Moore.

He noted that schools offer AP statistics or math modeling. “These alternatives need to be more available,” he said.

If you’re uncertain about whether calculus is the next step your student should take, talk to his math teacher about whether he’s ready. There may be better math options at a nearby community college if the high school doesn’t offer them.

Francis “Skip” Fennell, president of the National Council of Teachers of Mathematics, emphasizes that algebra and geometry are the most important subjects to be mastered in high school. As president of the K-12 math teachers’ organization, he says he’s gotten this advice from college math professors:

“Make sure they learn algebra and geometry. Let us do the calculus.”

Get to know the skills your child will need, not just the required classes. Wilson, the Johns Hopkins math professor, reviewed the states’ K-12 math standards for the Thomas B. Fordham Foundation. He recommends that parents who want to make sure their students are getting prepared for college compare the topics in their students’ textbooks to the California standards for algebra I, geometry, algebra II and pre-calculus.

A number of initiatives have been launched to help more students be more prepared for college math. Among them:

Wilson offers this advice to parents trying to evaluate their students’ math instruction:

“Calculators have their role,” he adds, “I would not want someone to go back to looking up log tables and trig tables, but for things that don’t absolutely require a calculator, they should not use one.”

If you notice any of these questionable practices in your child’s math classroom, you may want to express your concerns to the teacher and the principal.

One other cautionary note: Beware of classes in which students are allowed to pass or progress because they complete extra credit rather than demonstrate through tests and classwork that they understand the concepts.

If you have a weak math background, don’t let that get in the way of your child’s learning. You don’t have to know the math to get a good idea of how well your child will be prepared, says NCTM President Fennell. You can ask the teacher about the content of the class. “Ask, ‘Will the calculus in college be different than this?'” he suggests. “Ask the teacher, ‘What is the math? Is it a repeat of math that should have already been mastered?'”

What about kids who want to skip college?

Your teenager may insist that college isn’t for her. She should know that students headed straight for the work force will need the same math skills as their college-bound counterparts, according to a 2006 study by the ACT.

The study looks at occupations that don’t require a college degree but pay wages high enough to support a family of four. The math and reading skill levels required to work as an electrician, plumber or upholsterer were comparable to those needed to succeed in college.