When should kids start kindergarten?

Redshirting kindergarten — holding kids back to start school later — is increasingly popular. But does redshirting help, or hurt, a child? The research may surprise you.

This fall, 4-year-old Luke will be starting kindergarten in Centerville, Ohio. He’ll be one of the youngest in his class — turning 5 just before the school year begins — and his mother is concerned.

Historically, the starting age for kindergarten has varied widely. In the past five years, both states and districts have pushed the minimum age to start kindergarten up so that more and more kids are at least 5 years old when they start school. (See minimum Kindergarten entrance ages for all states as of 2014.) Still, in states such as Connecticut and Maine (and certain districts in Ohio, Massachusetts, Vermont, New Jersey, and other states), you can easily find a 4½-year-old and a 6½-year-old in the same kindergarten class. That’s exactly what worries Luke’s mom, Deb Nelson, who has seen the difference just a few months can make, whether at home with her three sons ages 6, 4, and 3 or at school with the kids in her older son’s kindergarten class. Some kids are ready to read and write; others have trouble sitting still and paying attention. Being younger is particularly problematic as kindergarten becomes increasingly academic.

Delaying kindergarten is on the rise, both because state minimum ages are higher and because some parents are opting to wait until their children are older to start school. According to the most recent data available from the National Center for Education Statistics (NCES), in the 2010-2011 school year only 6 percent of kids started kindergarten at age 4, 42 percent of kids were between 5 and 5½, 43 percent were between 5½ and 6 years old — and more than 9 percent of kids starting kindergarten had already turned 6. But will this benefit or hurt children in the long run? Educators and parents are wondering just that, as they weigh the potential risks of starting kids in kindergarten when they’re either much younger or much older than other kids in their class.

Nelson’s not only worried about kindergarten. “It’s junior high,” she says. “I don’t want him to be 11 when everyone else is turning 12 and have him be practically a year behind everybody in sixth or seventh grade.” Both concerns — for a child’s success in kindergarten and through adolescence — are driving forces behind the popular practice of “redshirting,” or delaying a child’s kindergarten entry by a year or more. (The term is borrowed from collegiate sports, where athletes will practice with the team for the first year, but sit out competition while they get bigger, stronger, and more competitive.)

Parents typically hold a child back because they feel he isn’t ready — cognitively, socially, or emotionally. Others may want to give their child a leg up, on the assumption that being older will make him more advanced. “In a lot of circles, it’s become the fad,” says Gary Painter, an associate professor at USC’s School of Policy, Planning, and Development, who authored a paper on redshirting. “Particularly in upper-middle-class circles where parents want to give their children every advantage, and want their kids to be ahead of their peers.”

The NCES data backs up Painter’s assertion. Of the roughly 6 percent of children clearly designated as “delayed-entry kindergartners,” parents tended to have at least a bachelor’s degree, and their family incomes tended to be well above the poverty line.

Does redshirting make a difference?

Short term, the results for redshirted kindergartners are promising. According to the 2010-2011 NCES data, redshirted children scored slightly higher on reading and math scores both at the beginning and end of the year compared to kids who started kindergarten at 5 or younger. However, the difference is slight, and there is not yet any data on the long-term effects.

Painter’s work, on the other hand, is based on a longitudinal study that looked at academic and social outcomes of delayed kindergarten entry over the course of about 20 years. He followed children starting at age 4 or 5 through age 25 or 26. Incredibly, he found no academic or social benefit to redshirting (The one exception? Varsity football.) In fact, he found a small benefit to being younger in terms of slightly higher college attendance rates. But is Painter’s information, which is necessarily old (his subjects are now all in their 30s), on target? “There’s other research out there from here and abroad that finds older kids do slightly better than younger kids while they’re in school,” Painter says. “We need to keep a close eye on it.”

Overall, research on has found mostly unfavorable results for being older than your grade-level peers, including academic achievement that disappears in later grades and an increase in social and behavioral problems in adolescence, when being older (or different in any way) can create problems. But much of this data is old, and, in many cases, linked to studies on grade retention, which is likely more of a social stigma for a child than starting kindergarten later.

A Canadian study suggests that redshirting can have positive academic outcomes, including a reduced chance that the child will repeat the third grade and in tenth grade improved math and reading scores. According to this study by the NBER, the effects are highest for boys (who are more often redshirted) and low-income students. Additionally, the researchers’ estimates suggest that not only is delayed kindergarten better, but starting too early may have negative consequences for kids.

In the meantime, it’s up to parents to determine their child’s kindergarten readiness on a case-by-case basis, taking into consideration social and emotional readiness, as well as cognitive ability. For many parents, evaluating a child’s kindergarten readiness isn’t easy. Former preschool teacher Tracy Gibb delayed her son’s kindergarten entrance because he was immature socially. “I’ve worked with kindergarten teachers for many years, and what they want are kids who can sit still and behave themselves well enough to learn, rather than a child who understands what’s going on but is a discipline problem because he’s too young to handle the responsibility of kindergarten,” she wrote in an email. Now, she thinks her 11-year-old son is on a par with his fifth grade peers emotionally. “This is a decision I have never regretted.”

When 4-year-old Delilah’s preschool teachers suggested she might not be ready for kindergarten, her mother, Los Angeles-based songwriter and music teacher Deborah Poppink Hirshland, was impressed with how the teachers explained their conclusion. In kindergarten, they told her, there are a lot of three-step processes, such as get a piece of paper, draw a shape on it, then cut out the shape. “Delilah went to the teacher after every step to ask what to do next,” Poppink Hirshland says. After an assessment, Poppink Hirshland learned valuable information about her bright daughter, who grew leaps and bounds thanks to occupational therapy. Now, 6-year-old Delilah is thriving in kindergarten.

The school Nelson’s sons attend offers a young 5s program for kids who may not be kindergarten-ready. At a pre-enrollment panel discussion with four local kindergarten teachers, Nelson raised her hand and asked the all-consuming question: “When should my son start kindergarten?”

“One teacher said, ‘In my 35 years of teaching, I’ve never encountered anyone who wishes they hadn’t done the young 5s program, but I’ve encountered some who wish they had done it,'” Nelson recalls. She was sold, and asked to have Luke evaluated for the program. The assessment included tests of Luke’s fine- and gross-motor skills, attention span, attention to detail, ability to follow directions, number knowledge, ability to spell his name, alphabet knowledge, color vision, and a hearing test. Luke scored high and showed no discernable deficiencies. So despite actually being a young 5-year-old, he was deemed ineligible for the program.

Still worried her son wasn’t ready, Nelson went to the principal. “[The principal] said in his case, because he doesn’t have any deficiencies and scored so high, maybe a regular classroom would be better for Luke,” recalls Nelson. Still worried for her son down the road, Nelson made plans with the principal to have Luke take kindergarten twice. “We just tell him that he gets two years of kindergarten. He doesn’t have any feelings of being held back or retained.”

Yet another part of the equation with today’s high-stakes testing is that we expect more of kindergartners. Unfortunately, they’re less prepared for success. “Kindergarten is much more academic than ever,” says Emily Glickman, a Manhattan-based educational consultant. “Many people feel that kindergarten is the new first grade.” Reading expert and author of Raising Confident Readers: How to Teach Your Child to Read and Write — From Baby to Age Seven J. Richard Gentry, PhD says the problem is exacerbated by parents failing to prepare their children for reading. Nearly half our nation’s kindergartners aren’t set up for reading success, he says. “The big question is whether a child is ready for formal reading instruction,” says Gentry, who explains that in terms of brain development, kids aren’t ready to read until age 6. But starting from birth, parents need to start preparing their kids to read with “joyful literacy activities” such as reading aloud, drawing, and playing writing games. According to Gentry, too many children aren’t getting this kind of preparation. “About 1.5 million kids come to kindergarten and they can’t write their name or retell the story of a favorite book,” he says. “They’re already behind. They’re the achievement gap.”

Who gets helped — and who gets hurt

Simply staying home and being a year older in kindergarten isn’t the answer. “We need to consider what the child is doing, when otherwise he would’ve been in an educational and enriching environment,” says Shane Jimerson, professor of school psychology at University of California at Santa Barbara.

Educational researcher Melodye Bush agrees. “It’s not good to start everyone later,” she says. “It’s not good to have everyone start at age 6. What we see is that the earlier you start [kids] learning to read and write, the better. As far as ability to retain knowledge, it’s better to start them at age 3.” Bush speculates that with time-strapped, stressed parents, “kids aren’t getting the necessary pre-learning they need.”

Both Gentry and Painter say that ultimately redshirted children from engaged, middle-class families “won’t be helped, but it likely won’t hurt.” But the practice puts a strain on families that don’t have the resources to pay for an extra year of preschool. If these younger kids have to compete with older, better-prepared children, it will, “exacerbate the achievement gap that already exists,” Painter says. “I don’t advocate that school districts ban redshirting, but it’s a caution to keep in mind.”

Next: Kindergarten: ready or not 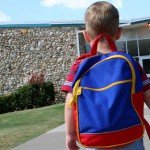