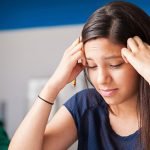 Falling into the achievement gap

What does it mean to be sucked into the achievement gap — and is there a way out?

When Maddie, 14, arrived at Capuchino High School in San Bruno, California, two years ago, she already felt like an outcast. She had failed eighth grade math at her middle school, spoke very little English, and lived with her parents and two younger siblings in a cramped apartment that her family struggled to afford. By nearly every measure of the achievement gap — race, language, family income — Maddie was set up to fail.

When we talk about the achievement gap, we’re talking about children like Maddie. Kids who start off behind, even before school begins. Once they get to school, these students fall farther and farther behind. Why? Because they don’t get the educational opportunities — enrichment classes, museum trips, parent vocabularies that give the dictionary a run for its money, best-in-class teachers and schools — that their more privileged peers enjoy. In the 8th richest country in the world, the persistent disparity in academic performance between kids from different racial and socioeconomic groups has been a sore point, a source of debate and worry, and a national disgrace for the past 50 years.

The role of education in America

In the U.S., education is not just valuable; it’s the only route to economic equity. For students of color, from low-income families, and who aren’t native English speakers to succeed in life, the vast majority will need a high school diploma plus post-secondary education that prepares them for a career rather than a job. But starting with the word gap before age 5, the high school graduation gap, the college admittance gap, and all the way through the college graduation gap, the statistics and research predict a tough road ahead for kids like Maddie because poor test scores in eighth grade lead to almost a near certainty that she’ll need remedial math classes in college — if she even gets to college. And without college, kids like Maddie face a future with few prospects other than low-paying service jobs.

Multiple studies have made it clear that educational achievement is key to long-term economic success. Simply put, if you have even some college education, over the course of a lifetime you will earn on average 50 percent more than somebody with only a high school diploma, and twice as much as a high school dropout. That translates to the difference between owning a home or not, being able to afford “extras” for your children (like tutors or enrichment classes), and being able to help send your own child to college.

So many ways to measure the achievement gap

Though standardized test scores are the most common way to document the achievement gap, glaring disparities show up in other areas of school life as well. Who’s getting A’s and who’s getting the F’s? Who has a perfect attendance record and who has missed 10 days of school by November? What groups are most likely to graduate at 100 percent, and which are more likely to drop out before reaching senior year? And what percentage of students in each group goes on to college?

Breaking down the achievement gap by group

Although most people discuss the achievement gap as if it’s one thing, it actually involves many comparisons between many different groups.

The gap between white and African American

Although the gap between African-American and white students’ test scores has narrowed as much as six points from 1990 to 2013, the gap remains huge. White fourth graders score 26 points higher in both math and reading. In eighth grade, reading scores differ by 30 points and math scores by 32.

But what do these numbers mean for African American students?

The gap between white and Hispanic

Given that some Hispanic students are still learning English, it’s not surprising that there is a reading gap between Hispanic and white students. But the gap is still far too wide. The good news is that the gap between white and Hispanic fourth graders’ reading test scores decreased significantly from 1994 to 2013 — from a 36-point difference to a 25-point difference. However, if the score gap persists through high school graduation, those 25 points equate to two to four years of school. Academically, that means Hispanic twelfth graders are where their white peers were two to four years before. This discrepancy corresponds to a higher drop out rate and a lower future income..

The gap between English language learners (ELL) and English speakers

From 2000 to 2010, more than half of the total population increase in the U.S. — more than 15 million people — was Hispanic. Nationwide, around 25 percent of our public school students are of Latino origin and in some border states, such as California and Texas, more than 50 percent of students are Hispanic. Around the country, schools have a growing number of students who are recent immigrants. Omaha Public Schools in Nebraska, for example, have more than 2,000 students who speak around 115 different languages. It’s hardly surprising that the achievement gap between ELLs and their English-speaking peers is huge.

Not just a reading issue

Lower standardized test scores through eighth grade often mean Hispanics and other minorities are not eligible to enroll in the high school classes they need to prepare them for college. Experts see this as one of the reasons Hispanic students attend four-year colleges at a lower rate than their white peers. Not having a bachelor’s degree could be the difference between a job as a grocery store stocker and a career as an IT technician.

The gap between white and Asian/Pacific Islander

Who hasn’t read about tiger moms, so called because of their laser-like focus on achievement and their hyper-involved style of parenting? Well, it seems to be successful when it comes to closing achievement gaps. The tiger mom mentality, which is often accompanied by tight family bonds, an emphasis on hard work, and a long-term cultural emphasis on education, have propelled Asian-Americans to outperform all students — even white students.

This mega group, defined as people having ancestral origins in the Far East, Southeast Asia, or the Indian Subcontinent (Asians) or Hawaii, Guam, Samoa, or other Pacific Islands (Pacific Islanders), is earning A+ grades, while their white peers are at the A- and B+ level. Asian/Pacific Islanders are more likely to earn Ph.D.s, which lead them into highly skilled jobs like corporate CEOs, doctors, lawyers, and professors. Their white counterparts are less likely to get that advanced degree. With a bachelor’s, associate’s, or high school degree, white students are more likely to end up in jobs ranging from administrative to middle management. In 2011, whites’ median income was about $55,400; Asian-Americans’ was $65,100.

How the income gap becomes the achievement gap

The National Assessment of Educational Progress (NAEP) compares tests scores of students from low-income homes and those from more affluent homes using data from the National School Lunch Program (NSLP). It’s a step in the right direction, but it’s not enough because most data doesn’t distinguish between the students who live below the poverty line and those whose families are considered low-income. For example, a homeless family with only one parent faces more extreme challenges than a family of four where both parents are working but only bringing in $2,600 each month. Both families are eligible for free lunches, and so they are lumped together in the NSLP data.

Even so, it presents a bleak picture of the economic achievement gap. Year after year, economically disadvantaged students score significantly below students from families of average to above-average economic status. Since 2003, the test score difference between affluent families’ children and both middle- and low-income families’ children has grown. And it’s not just standardized tests; SAT scores, which are used for college entrance, can consistently be graphed on a line parallel to parental income. Reports reveal that the greater the family income, the higher the SAT scores. While poor students are increasingly graduating from college, they’re not keeping up with the college graduation rates of the wealthiest Americans’ children, Stanford sociologist Sean Reardon reported in his 2011 research.

Details of the economic achievement gap

What do these scores mean for economically disadvantaged students?

The 29-point difference in fourth grade reading scores means the difference between an A or an A- and a D or an F. But the problem compounds from there. Without a solid foundation in reading, students won’t do well in social studies, science, or any other classes because reading is always involved. Without improved reading skills, these students will fall more and more behind in and out of school. In 2009, these students dropped out of high school at five times the rate of students from high-income families. For those who make it, the persistent 29-point gap in test scores over time equates to students who are two to four years of school behind their more affluent peers.

Is the achievement gap narrowing?

It’s clear that the achievement disparity between ELLs and their English-speaking peers is by far the biggest gap. But the gap between students from low-income families and wealthier families continues to grow. Among black and Latino students and their white counterparts, the achievement gap has narrowed, but it’s still wide.

At this rate, equal scores — and fair long-term outcomes — are not in sight. This is why the achievement gap has quite aptly been called “the civil rights issue of our time.” It’s affecting the prospects and happiness of families, communities, and the nation.

Battling the achievement gap will require diligent involvement from parents, teachers, and mentors as well as lots of hard work from students. Long before far-reaching, across-the-board change happens at national levels, communities will act and individuals will fight their way to success — or success won’t happen.

Maddie, the Capuchino High School student, is closing gap against all odds. She was quickly placed in an algebra support class her freshman year and given extra help with her English. By her junior year, she was fluent in English and enrolled in Algebra 2, along with three International Baccalaureate classes — IB History, IB Biology, and IB Spanish. Over the summer, this ambitious young woman interned at a local hospital and organized a team for Relay for Life. Stanford is her dream school, where she wants to go into the health field. Race, parents’ income, and English as a second language are not only hurdles — they’re achievement gaps — that she’s attempting to jump. She’s got a running start.