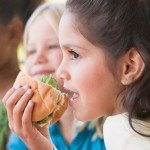 26 school lunch ideas from around the world

Take a spin around the globe to spice up your kids' rice, pasta, and greens — and turn your dinner into their lunches!

Jazz up your child’s lunch by thinking outside of the lunch box staples and choosing foods from different parts of the world instead. The building blocks of these dishes — rice, beans, noodles, and chicken — can be prepared ahead (and served for dinner the night before) then transformed into wraps, rolls, flatbreads, soups, or salads for lunch.

Ingredients for the healthy cuisine associated with countries in this region, such as Italy, Greece, and Spain, include olives, olive oil, garlic, basil, tomatoes, cheeses (mozzarella, parmesan, and feta), and pasta.

A taste of Asia

Asia is about as culturally and culinarily diverse as it gets, but there are common ingredients found in many Asian cuisines, including: tofu, ginger (fresh or pickled), rice, soy sauce, tamari sauce, seaweed (nori), and rice paper wrappers.

Signature tastes from this part of the world include kid-friendly foods, such as avocados, beans, jicama (a crunchy, mild-tasting fruit), quinoa (a protein-packed, grain-like seed), mangos, and tortillas.

Most kids love dips. Creamy dips are a popular starter in the Middle East and in European countries like Greece and Turkey. Common ingredients in Middle Eastern foods include olive oil, garlic, garbanzo beans (aka chickpeas), peppers, and bulgur (cracked wheat).

Flavors from Africa (north and south) can be combined with ingredients from the southern United States to create healthy, satisfying fare. Common ingredients include black-eyed peas, peanuts, sweet potatoes, and couscous.

Indian dishes tend to be fragrant, with spices such as cardamom, clove, cinnamon, nutmeg, curry, and turmeric. Other common Indian ingredients include yogurt, chickpeas, paneer (cheese), chutney, and rice.