Yes and no, say the experts. The heated debate over school uniforms shows no signs of cooling off.

For the past decade, schools, parents and students have clashed over the issue of regulating student attire. In 2007, cases involving an anti-Bush T-shirt in Vermont, an anti-gay T-shirt in San Diego, and Tigger socks in Napa, California, made their way through the courts, causing many to wonder whether this debate will ever be resolved.

Meanwhile, researchers are divided over how much of an impact — if any — dress policies have upon student learning. A 2004 book makes the case that uniforms do not improve school safety or academic discipline. A 2005 study, on the other hand, indicates that in some Ohio high schools uniforms may have improved graduation and attendance rates, although no improvements were observed in academic performance.

Why do some public schools have uniforms?

President Clinton provided momentum to the school uniform movement when he said in his 1996 State of the Union speech, “If it means teenagers will stop killing each other over designer jackets, then our public schools should be able to require their students to wear school uniforms.”

The pros and cons of school uniforms

According to proponents, school uniforms:

Schools and districts vary widely in how closely they adhere to the concept of uniformity.

Generally, dress codes are much less restrictive than uniform policies. Sometimes, however, dress codes are nearly as strict, as in the case of a middle school in Napa, California. This particular school’s dress code required students to wear solid colors and banned images or logos on clothes. When a student was sent to detention for wearing socks adorned with the image of Winnie-the-Pooh’s friend Tigger, the girl’s family sued the school district for violating her freedom of speech. In August of 2007, the district announced it would relax its dress code – for the time being – to allow images and fabrics other than solid colors. The district superintendent, while admitting that banning images on clothes raises concerns about the restriction of political and religious speech, announced his intention to move soon toward implementing uniforms in the district.

Uniforms are certainly easier for administrators to enforce than dress codes. Consider two recent examples of students challenging dress codes through the courts.

In June of 2007, the United States Supreme Court upheld a lower court’s decision affirming a Vermont student’s right to wear a T-shirt depicting President Bush surrounded by drug and alcohol images. The school had suspended the student, not for the anti-Bush political statement, but for violating a dress code that prohibits drug and alcohol images. The courts, however, disagreed with the school and found that, because the images referred to Bush’s alleged past use of cocaine and alcohol, they were protected as free political expression.

In March of 2007, the Supreme Court “vacated” or set aside the decision of a lower court upholding a San Diego high school’s suspension of a student for wearing an anti-gay T-shirt. The school argued that the T-shirt was hateful and inflammatory. The Supreme Court’s action essentially struck down the school’s argument and upheld the student’s right to free speech.

In both of these cases, the schools’ attempts to protect students from drug and alcohol images or hateful speech were reversed in favor of free speech. To clarify the matter somewhat, the Supreme Court ruled in June of 2007 in favor of a school in Alaska that had suspended a student for displaying a banner reading “Bong Hits 4 Jesus.” The court ruled that the reference to drugs in this case had no political message and could indeed be seen as advocating drug use.

• Decorations (including tattoos) that are symbols, mottoes, words or acronyms that convey crude, vulgar, profane, violent, gang-related, sexually explicit or suggestive messages
• Large or baggy clothes (this prohibition can be used to keep students from excessive “sagging”)
• Holes in clothes
• Scarves, curlers, bandanas or sweatbands inside of school buildings (exceptions are made for religious attire)
• Visible undergarments
• Strapless garments
• Bare midriffs, immodestly low-cut necklines or bare backs
• Tights, leggings, bike shorts, swim suits or pajamas as outerwear
• Visible piercings, except in the ear
• Dog collars, tongue rings and studs, wallet chains, large hair picks, or chains that connect one part of the body to another

One school might require white button-down shirts and ties for boys, pleated skirts for girls and blazers adorned with the school logo for all. Another school may simply require that all shirts have collars.

In Toledo, Ohio, elementary school students have a limited palette of colors that they can wear: white, light blue, dark blue or yellow on the top half and dark blue, navy, khaki or tan on the bottom half.

When Toledo students reach junior high, they are treated to one more color choice: maroon.

What research says about school uniforms

Virginia Draa, assistant professor at Youngstown State University, reviewed attendance, graduation and proficiency pass rates at 64 public high schools in Ohio. Her final analysis surprised her: “I really went into this thinking uniforms don’t make a difference, but I came away seeing that they do. At least at these schools, they do. I was absolutely floored.”

Draa’s study concluded that those schools with uniform policies improved in attendance, graduation and suspension rates. She was unable to connect uniforms with academic improvement because of such complicating factors as changing instructional methods and curriculum.

University of Missouri assistant professor, David Brunsma reached a different conclusion. In his 2004 book, The School Uniform Movement and What It Tells Us About American Education: A Symbolic Crusade, Brunsma reviewed past studies on the effect of uniforms on academic performance. He also conducted his own analysis of two enormous databases, the 1988 National Educational Longitudinal Study and the 1998 Early Childhood Longitudinal Study. Brunsma concluded that there is no positive correlation between uniforms and school safety or academic achievement.

What do students think about uniforms?

A student discussion: pros and cons of uniforms

Editor’s note: This video is part of our high school milestones series about communication skills. The students in this video discuss the pros and cons of school uniforms.

After a school uniform policy was implemented in three Nevada middle schools in 2008 and 2009, researchers at the University of Nevada, Reno, set out to find out what 1,350 seventh and eighth graders thought about the change. The vast majority — 90 percent of students — reported that they disliked wearing uniforms. However, other data showed more nuanced results. For instance, 54 percent of students agreed that they still had their identity while wearing a uniform, and 50 percent agreed that uniforms saved their families money. But only 41 percent of students agreed that there was less gang activity at their school after uniforms were required. However, when the researchers looked into school discipline and local police records and compared them to the prior year’s data, discipline referrals were down 10 percent, there were 63 percent fewer police log reports, and graffiti, fights, and gang-related activity were all down.

A new trend is the mounting pressure to establish dress codes for teachers. Apparently the same casual mind-set toward revealing outfits is cropping up in the ranks of our teachers.

The debate over uniforms in public schools encompasses many larger issues than simply what children should wear to school. It touches on issues of school improvement, freedom of expression and the “culture wars.” It’s no wonder the debate rages on.

The School Uniform Movement and What It Tells Us About American Education: A Symbolic Crusade, David Brunsma. Rowman & Littlefield Education, 2004. 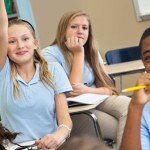