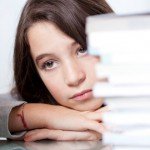 When Jacqueline Wellington, 15, was planning her freshman year at high school, she was determined to learn French. Her teachers and counselors said no. Wellington, now a sophomore, has dyslexia and her counselors felt that learning a second language would be difficult, if not impossible for her.

But Jacqueline was not to be deterred, and her mother, Laura Wellington, backed her up. “I understood their point,” said Wellington. “But I overruled them and I’m glad I did.”

Conventional wisdom says that kids with dyslexia are going to have a hard time learning a second language, and many are able to get a pass on school language requirements as part of their IEP.

There are many reasons why a person with LD could struggle in a second language, says Sheldon Horowitz, Director of LD Resources & Essential Information at the National Center for Learning Disabilities (NCLD). Many have difficulty isolating sounds in words, differentiating between vowels, and mispronouncing similar sounding words. These issues would be exacerbated in a new language, says Horowitz.

“Students with language based learning disabilities may certainly struggle with learning another language because it taps many of their areas of difficulty in learning,” agrees Jana Echevarria, Professor Emerita of Education at California State University, Long Beach.

How much difficulty a student has learning a second language may depend on the extent of their struggles in their native language. Leonore Ganschow of the University of Miami, Ohio, and Richard Sparks of Mt. St. Joseph’s College, have studied second-language learning in people with dyslexia and found that people who struggle with phonemic awareness in English will likely find it difficult to master the sounds of another language. If phonemic awareness is not a huge struggle for them, they may be able to converse in a second language, but be unable to master the grammar and writing parts. Or they may be able to read and write the language, but not speak it.

But, this is not to say that it can’t be done. The research has shown that people with dyslexia can learn a second language. Just like with their early learning to read, the best program is a “systematic multisensory structured language approach,” according to the International Dyslexia Association. The IDA has a fact sheet with a list of specific teaching strategies and suggested modifications for teachers teaching a second language to students with dyslexia.

Some languages may be easier to learn than others, says Horowitz. He says that it is often the case that people with learning disabilities are quite successful in learning a foreign language that is, for example, predictable and rule bound (vs. English, which has more exceptions than rules); there are also some alphabets that are easier to learn because the sounds of the letters are always the same (which is not always the case in English).

Caroline Gear, director of programs at the International Language Institute of Massachusetts, has found that it’s the student’s motivation along with the teaching method that makes the difference.

“I really think that it’s not so much about what’s taught, but how it’s taught,” she said. “For so many years, folks with learning disabilities were exempt from taking language classes. I think that folks with learning disabilities can learn a language as long as the course is, as we call it, VAKTASTIC. This means, visual, audio kinesthetic, tactile, smell and taste…and the “ic” thrown in there for a wonderful word to remember.”

Horowitz has found that some people with dyslexia may struggle with reading, writing, and spelling, but be accomplished as speakers, so while they a typical second-language classroom might be a problem for them, a more conversational model worked.

“When they did an immersion experience (e.g., living abroad with a family that spoke a foreign language) they were quite successful, and ended up learning real conversational skills that were practical and helpful in everyday life,” he said.

Jacqueline is now in her second year learning French and is doing well, her mother reports. She works hard, has gotten lots of help and is one of the top students in the class. Her teacher had experience teaching children with special needs and understood the potential barriers, Wellington said.

“I wanted to give her the chance to try,” Wellington said. “If I said she couldn’t do it, I’d be saying I didn’t believe in her.”

Her advice to parents is to let your child try to learn a second language if they want to; make sure the teacher understands your child’s learning issues; and support her in any way you can. And if it turns out that it’s too difficult, you can always take your child out of the class. Rien risqué, rien gagné.