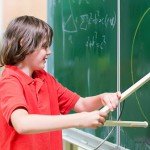 Does your kid know it all? Many seventh graders seem to think they do. But when it comes to math, it may start to seem true. Seventh graders delve deep into working with negative numbers. It’s one of the most important — and difficult — challenges of the year. But it’s worth it, says Ryan Redd, who teaches math at Roland-Grise Middle School in Wilmington, NC. “Students will use their knowledge of positive and negative numbers throughout their time in math.”

Here are the 9 key skills your child should learn in 7th grade math:

Kids learn to understand that a number and its opposite – like 7 and -7, are “additive inverses,” which means when they’re added together, they have a sum of 0.

In equations, students learn that an expression like p + q represents a number on a number line, and that number can occupy either a positive or negative position.
Likewise, kids need to understand that subtracting a number is the same as adding its additive inverse (aka negative number).

Watch: here’s what seventh graders are expected to understand when working with negative numbers in equations and using a number line.

Keep it in proportion

For example: If Jackson eats 1.2 pies in ⅕ hour, what is his pie-eating rate? Answer six pies per hour.

A big new skill this year is learning how to figure out if two quantities are proportional using tables, equations, and by graphing on a co¬ordinate plane.

Equation example: If two T-shirts cost a total of $9 and eight T-shirts cost $36, the equation representing cost and number of items for both scenarios can be written as t=pn or total = price x number. When you plug in these values, the rate for one T-shirt is the same, showing that this relationship is proportional.
2 x T = 9, so one shirt is $4.50.
8 x T = 36, so one T-shirt is $4.50.

If a graph depicts a straight line that goes through the center or “0,0” point of the coordinate plane, and then the quantities are proportional.

What does algebra mean? This may help:

In seventh grade math, students only work with expressions, equations, and inequalities with one variable.

Seventh graders learn that rewriting an expression in a different form can simplify a problem.

This year, solving multi¬step problems is a bit tougher because problems involve negative numbers, fractions, decimals, percents, and rates — and may require graphing data points to solve. Solutions may also be inequalities rather than having one distinct answer.

For example: Steve is a shoe salesman who is paid $500 week plus $4.50 for every pair of shoes that he sells. He wants to earn what he needs to pay his $1,700 rent this week, and he already has 60% saved. How many pairs of shoes must Steve sell this week?

Seventh graders work with increasingly complex shapes. They use — and draw — scale drawings of different shapes to find area and volume, to understand attributes like angles, and to see how to break shapes into parts in order to better measure them. Your child may “unfold” a three-dimensional shape like a pyramid into an odd-shaped two-dimensional figure that your child will then have to measure and describe by its attributes. Through these exercises, your seventh grader gets handy with rulers, protractors, and may even use tech tools, such as software for drawing to scale.

Geometry also makes a star appearance. Your child needs to memorize the formulas for finding the area and circumference of a circle (A = πr2 and C = 2πr, respectively). She’ll also be expected to be versatile with supplementary, complementary, vertical, and adjacent angles in finding the unknown angle in a triangle, right prism, or other polygon. This will be essential when solving real-world problems that involve triangles, quadrilaterals, polygons, cubes, and right prisms.

Did your seventh grade math teacher endlessly flip coins and record the results? If so, this is one area of seventh grade math that may look familiar. This year your child will be expected to learn the basics of probability, including understanding the idea of random sampling — and using that data to produce a “representative sample.”

They will also be expected to compare data to draw inferences about two populations.

For example: Students may take the height of all kids on the soccer team and all kids on the tennis team and plot those data points to see the similarities and differences between the two teams.

Finally, in seventh grade math, kids will learn to develop, use, and evaluate probability models. With this skill, your child can predict all sorts of important events in their lives. Will their favorite basketball team win the playoffs? She can calculate the probability all on her own. Will his favorite singer go platinum? He can come up with the probability based on the current sales numbers.

Hear what an award-winning middle school math teacher says is the number one thing seventh graders must know when they get to eighth grade.