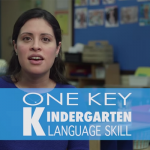 Ms. Sintes says kindergartners really need to be able to recount details of their picture or their day — kind of like telling a story — to help them learn how to read.

“Many times, parents focus on either already knowing their letters before they come into kindergarten and being able to count all the way to 100. But I think it’s actually more important that before they come to kindergarten that they’re able to develop their oral language skills. What I mean by that is having conversations with students is really important. Because many times, at the beginning of the year, I’ll ask them about their story that they drew. So if they drew a picture of their mom and a dog, they’ll just say, “This is my mom and this is my dog.” And if they’ve had that conversations with parents about their day, they’ll be able to actually tell me a full story. They’ll be able to tell me about the day, that they went outside, it was sunny, they were walking with their dog, they were walking to the park, and when they were there, they saw other dogs. And they’re able to really tell me a lot of elements of a story.”

Learn more about your kindergartner’s learning and development this year, including: