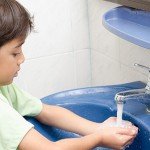 “Did you wash your hands?”

Poor children. Constantly being reminded by parents to wash, wash, and wash some more. But keep up the nagging, Mom and Dad! Scientists have proven this timeless refrain merits the nagging: An estimated 80 percent of all colds and flu are contracted via our fingers. So the best (and simplest) way to avoid winter ailments is soaping and scrubbing your child’s cute, but germ-ridden, hands.

Researchers in Denmark put this theory to the test with 652 children ages 5 to 15. About half were taught proper hand-washing techniques and required to wash up using ethanol-based gel three times per day; the others weren’t. The cleaner-handed kids missed 26 percent fewer school days and had 22 percent fewer illnesses.

A stateside study of about 6,000 students in 16 schools across Delaware, Ohio, Tennessee, and California showed a 19.8 percent reduction in school absenteeism when students and teachers used alcohol gel hand sanitizer whenever they entered or left a classroom.

To make their mitts truly germ-free, kids need to scrub hands, fingers, and fingernails (under-the-nail crevices are a haven for nefarious microorganisms and parasites such as pinworms) for 20 to 30 seconds, which is about how long it takes to sing the child-pleasing “Happy birthday” song twice. When they’re done washing, make sure your kids dry their hands with clean towels. Otherwise, they’re just re-contaminating.

Anywhere but the face!

Children frequently paw at their faces: poking, picking, scratching, and rubbing their nose, mouth, eyes, and ears. And every time they do, they’re unwittingly doing germs a tremendous favor, delivering them straight into vulnerable, easily-infected orifices.

While it might seem that the mouth or nose is most susceptible, it’s our kiddos’ dewy eyes that are most at risk of absorbing viral particles. To avoid drifting pathogens, try teaching your children to minimize eye-rubbing and to shut their eyes tight or walk away whenever someone sneezes or coughs near them. If your pint-sized rock star wants to sport sunglasses all winter long, let her: Lenses are an ideal shield against airborne enemies.

Did you know about the healing powers of salt? It’s a germ-killing, infection-busting cleaner. One caveat: These salt-based solutions aren’t likely to be popular with your kids. Nevertheless, here are three salty strategies to stave off the sniffles:

• Pour it: A neti pot is another way to irrigate your child’s eight sinus canals. It’s a teapot of sorts that lets you slowly pour warm saltwater into one nostril so it flows through the nasal cavity and out the other nostril, flushing out moist and dry mucus and providing anti-bacterial protection against infections. (Hint: Use un-iodized salt: It’s less irritating to sensitive membranes, and always use distilled, purified, or boiled-then-cooled water to avoid brain-threatening amoeba or parasites that may inhabit tap water.)

• Gargle it: Gargling with salt water to prevent sore throats is a smart, savvy practice according to Dr. Mark Moyad, author of Dr. Moyad’s No BS Diet Health Advice. Another gung-ho gargling endorsement: A 2005 study in Japan concluded that, “This virtually cost-free [prevention] would appreciably benefit the general population.”

Let them play in the sun till they’re pooped

A good rule of thumb: Let your children’s legs run freely so their noses won’t. Even when it’s cold, urge your children to scamper outside and play — especially when bright sunshine peeps through the winter snow, rain, and fog. Sunshine delivers the almighty flu-and-cold-fighting vitamin D, which an American Journal of Clinical Nutrition article asserts is far superior to vaccines for flu prevention because it activates our protective killer T-cells. A 2006 study by Atascadero State Hospital reported that vitamin D reduces respiratory infections in children and boosts immunity, too. (For those winter days long on cold and short on sun, see how you can safely add vitamin D to your child’s diet.)

Vigorous play also fights viral and bacterial infections because exercise boosts the immune system, elevating the production of killer T-cells by as much as 300 percent. Plus, all that deep breathing can help clear a kid’s nasal passages, keeping them from getting congested.

All warm and toasty

Drinking hot beverages by a roaring fire, wrapped in a ducky-down quilt over thick pajamas and fleeced booties is a sure, snuggly recipe for cold-and-flu resistance. Why? Partly because your children’s tootsies are covered.

A 2005 study by the U.K.’s Cardiff University’s Common Cold Centre set out to prove the folkloric notion that being cold contributes to getting a cold — and they succeeded, at least in part. Researchers found that subjects who had their feet chilled in ice water were more than twice as likely to develop a cold in the next four to five days.

Staying warm all over seems to help, too. If your children don’t mind a little sweat, maybe they’ll consider hitting the sauna. (It’s so European, especially Finnish!) A 1990 University of Vienna study discovered that sauna users are less likely to catch a cold. But if your kids just won’t do it, a hot tub may provide similar benefits.