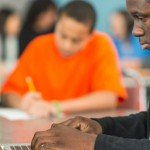 A blend of edtech and innovative instruction is sparking a turnaround at one inner-city school. Could this be a model for others?

Poverty, violence, a legacy of educational failure. The odds are against Unity High School, a 290-student charter school in East Oakland, a neighborhood with some of the highest poverty and murder rates in the country. In 2012, one-fifth of the city lived below the poverty line and Oakland ranked seventh on PolicyMic’s list of America’s 10 deadliest cities. Unity’s student body — 95 percent Latino or African-American and 85 percent qualifying for free or reduced-priced lunch — embodies the kind of demographics that have inspired decades of research aimed at closing an inexorable achievement gap. Nearly half of the students’ families have an annual income of $30,000 or less. At many students’ homes, English is rarely spoken.

Until recently, Unity’s test scores reflected the broader troubles its students contend with daily. In 2010 teachers at Unity took a close look at their 9th graders’ math scores and they weren’t happy. Only 9 percent scored proficient in Algebra I; 10 percent reached proficiency in Geometry. Students were scoring in the bottom 20th percentile statewide. Unity ranked 1,078 out of 1,340 public high schools in California, and few Unity students went to college. Many didn’t even make it to graduation.

In just four years, Unity has achieved an astonishing turnaround. The school now ranks 11th in California for 9th grade algebra scores. More than 90 percent of Unity students go on to two- or four-year colleges, besting the national average of 68 percent. What’s more, nationally 42 percent of high school grads go straight to four-year college (NCES, 2011) compared to about 70 percent from Unity. Of those Unity grads, 90 percent are the first in their families to attend college.

So what happened at Unity High School?

If one had to answer that question in only two words, the answer might be Khan Academy. The highly acclaimed free website uses online videos to teach a staggering array of subjects. The founder, former hedge fund analyst Salman Khan, started it as a way to help his cousin in math. But success at Unity High School — like many edtech miracle stories — began with something fundamentally unrelated to technology: it started with a willingness to approach an old problem in a very new way.

Not the math, the mindset

Tall, grey-haired, and good-natured, math teacher Peter McIntosh is used to thinking about how to improve systems — both in and out of the classroom. Before coming to Unity, McIntosh redesigned operations procedures as an executive vice president at Charles Schwab. Back in 2010, when Unity tested incoming freshmen on basic algebra and arithmetic skills, the results were a wake-up call. McIntosh and David Castillo, Unity’s principal at the time, decided to take a closer look to find out what was causing the lackluster student performance.

“We decided it was time to ask a new question,” the educators wrote in a blog. “Are the academic and personal habits of students at the root of performance obstacles in math education?” The short answer was yes. But that was complicated by the fact that — based on their long experience with students in the classroom — they believed students’ bad study habits stemmed all the way back to kindergarten. The teachers understood that the longer bad habits go unaddressed, the harder they are to overcome. Still, they wanted to create a learning environment that builds good study habits.

Salman Khan’s online education juggernaut is quite possibly edtech’s most celebrated innovation. With a lofty goal of “changing education for the better by providing a free world-class education for anyone anywhere,” Khan Academy (according to its own statistics) reaches more than 10 million people a month with roughly 5,500 videos in which Khan (and a growing army of teachers) talk viewers through lessons in math, science, economics, social science, history, art, and more, sketching out handwritten notes on a digital blackboard along with more than 100,000 interactive exercises where students can practice their skills. Along with the many individuals who use it as an educational supplement, about 350,000 registered teachers — like McIntosh and fellow Unity math teacher Kallie Berg  — are using Khan Academy as part of their curriculum.

McIntosh believed Khan’s interactive approach coupled with Unity’s devoted teachers might offer a formula for motivating the hardest-to-reach students. He pushed his colleagues to give the method a try. But mostly he pushed the students.

On a recent spring day, 24 students in McIntosh’s Algebra 1 class — a small sea of black and grey hoodies, heads down — intently worked out the problems posted on the whiteboard. McIntosh gave each student a piece of paper with a word problem about a liquid solution containing acid and water. He recommended that the students draw pictures to help solve the problem. “I’d draw a picture of, say, three bottles,” he advised the class. The goal here, he explained later, was to sharpen skills in translating a written problem — a math challenge described in words — into numbers.

Despite some head scratching, no one said they were lost. The students seemed to be working hard, their collective confidence palpable as they consulted one another and their teacher in search of the answer.

McIntosh speaks quietly, tossing out ideas, then waiting and sometimes pacing, as students puzzled through the problem. Using Khan, McIntosh says, has turned him into more of a leader than a teacher. By putting the students in charge of their own education, while also enabling McIntosh to closely monitor each student’s progress via the electronic dashboard, Khan makes student responsibility a keystone of the learning process. “My role is part motivator, part coach, part truth teller,” McIntosh says. “I lead, try to make sure they get there. But it’s their responsibility to find the answer. They have to want it and figure out how to get it. But I will help them in every way I can.”

According to some of his students, this switch to technology has created a powerful shift in how they approach their learning.

“I was often having a difficult time and not doing well in school before I came to Unity,” says 11th grader Josselyn Castillo. “The way Khan Academy materials are organized and presented… helped me organize my own thinking and problem solving.” Gradually, Castillo saw the fruits of her labor. Unity’s innovative approach “helped me focus, doing things step-by-step,” she said, which in turn led to steady progress.

Blended, but not “flipped”

At Unity High, McIntosh and his colleagues use Kahn Academy videos as a form of “blended learning,” a combination of traditional and online learning. At other schools using Khan Academy, classes are often “flipped:” students watch the lecture in the form of Khan videos at home, and do their “homework” at school, when they are most likely to need (and get) help from the teacher.

Unity’s approach differs: students watch Khan videos in the computer lab, then in class the teacher leads them in solving problems based on what they learned in the videos. This makes more effective use of everyone’s time, says McIntosh. The Khan lessons allow students to use technology to move forward at their own pace, while also still having access to a teacher’s explanation of the material.

Allowing kids to learn at their own pace gives students a far more active role in their own learning, says McIntosh. “Khan has changed the one thing that needs to be changed with these kids, which is their learning habits,” McIntosh says. “Khan has helped me win that battle, and that’s the battle I could not win by myself.”

Teaching kids how to learn

Converting to blended learning didn’t go over universally well. Unity lost a student, according to Principal Samuel Brewer. The hands-off, take-responsibility-for-your-own-education approach provoked questions from some parents — and teachers. “One thing we’ve heard from a couple of parents and a couple of teachers is, ‘What does this mean? Do kids have a teacher?’”

In fact, Brewer says, “The teacher is no less important: you can’t just set kids loose. But blended learning fundamentally changes the role of the teacher.” And that’s not what every parent wants for their child.

That shift in student mindset — the idea of kids taking responsibility for their learning — has been so significant that it inspired McIntosh to write a book: The Character Gap: Why reduced student responsibility causes the math gap. How Khan Academy can help fix it!

The formula that McIntosh, Castillo, and now Berg have stitched together at Unity avoids many of the edtech pitfalls so many schools run into, like the costs and complications of giving every child a tablet or computer, uneven internet access at home, and replacing teaching time with online tools. With their system, Unity’s also uncovered something more fundamental: how a tool can compel students to seize the reins of their education, one word problem at a time.

Brewer says Unity’s experiment with Khan Academy, though inspired by low math scores, has evolved into a kind of character education program. It works, he says, primarily because it amplifies, via technology, the age-old motivating power of devoted teachers. “When I think about my best teachers, [they] managed to find a way to get your permission to push you… [they said] ‘I absolutely know that you can do this and I’m not going to accept anything less. And for that reason, because I respect you and your ability, I’m going to work your butt off; I’m going to really push you and nurture you.’”

Indeed, what’s working at Unity is giving kids both the faith of their teachers and the tools to direct their own learning. Both help students persevere in the face of frustrations that once seemed insurmountable. Or in the words of Unity High junior Josselyn Castillo: “This made me want to stick with it. I know I can do this stuff and that reminds me I can do other things — things that before I didn’t think I could do, or wouldn’t even try.”