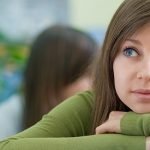 A mother tells how her daughter learned the hard way whose advice to trust when choosing college courses.

When my daughter Dria entered the University of California, Los Angeles (UCLA), in 1999, her Attention-Deficit/Hyperactivity Disorder (ADHD) was properly-documented, and she had completed the additional educational testing required to receive accommodations. When the UCLA Office of Student Disabilities (OSD) reviewed her documentation, one of their educational specialists noted Dria’s apparent difficulty with foreign language, based on her high school transcript which included one lone “C” in Spanish among otherwise uniformly high grades. Dria described the extraordinary effort she had expended just to earn a passing grade in Spanish. The specialist then administered additional tests which confirmed Dria’s poor prognosis for learning a foreign language and revealed her (previously unidentified) reading disability. Because of her disabilities, Dria was given the option of taking alternate classes to fulfill the university’s foreign language requirement.

Asking peers (not parents or professionals) for academic advice

While considering which classes she might enroll in for her major, Dria sought the advice of her college classmates. Several classmates — none of whom have learning disabilities — mentioned the linguistics course as being interesting and not too demanding for a freshman. When Dria told her father and me that she intended to enroll in the class, we both wondered whether linguistics would be a good match for her particular strengths and challenges. We suggested that she ask her adviser in OSD whether linguistics was the best choice for her. Dria responded (as would most kids her age) that her friends had assured her the course was “easy” and that she would do well. However, she also decided to talk to the professor and TA in advance “just in case,” and both of them also reassured Dria that she would be “fine.” Not wanting to be unduly negative about her plans, her dad and I decided to back down.

Lessons in linguistics and learning style

Unfortunately, our concerns proved to be well-founded. While studying linguistics, Dria was expected to memorize the phonetic alphabet — a daunting task for someone who never mastered sounding out words. Dria now admits that she worked harder to earn a “C-” in linguistics than in any other class she took at UCLA, including those in which she earned “A+’s.” In retrospect she shakes her head and wonders, “What was I thinking when I signed up for that class?”

Struggling through linguistics class taught Dria a valuable lesson: the way she experiences education may be very different from how her peers (and professors) without LD do. She also learned that other people’s advice might not always be appropriate for her. Dria learned the hard way that she needed to evaluate decisions from her own perspective and that it is to her benefit to consider viewpoints and expertise that she had previously discounted or simply not sought. She especially began to appreciate what a valuable resource the Office for Students with Disabilities was, and she became proactive about asking OSD for advice.

To her credit, Dria quickly learned how to satisfy her own particular study needs by disciplining herself to outline her class notes and reading material, and by forming small study groups to enhance learning and make it more enjoyable for her. These study habits helped her succeed at UCLA, where she was elected to Mortar Board National Honor Society, and was active in student government. She also realized, with input and support from the Office for Students with Disabilities (and her parents!), that her self-discipline and work habits would help her succeed in nearly any educational or vocational environment, which has always been important to our achievement-oriented daughter. And during the rest of her college career, she became a self-described “crasher” who would sign up for more classes than she planned to take and then audit professors to ensure that they engaged her and complemented her learning style.

In Fall 2004 Dria enrolled as a first-year student at UC Hastings College of the Law in San Francisco. There she heard upperclassmen relate their own, sometimes-difficult law school transitions. They repeatedly stressed that “law school is a marathon, not a 50-yard dash, “and that cramming to make up for semester-long neglect of assignments would not suffice. Ironically, although Dria is studying harder than ever, she is flourishing in law school while other students are struggling. She attributes her success to having already mastered the study skills that are a necessity for all law students. She has also learned to be flexible enough to seek assistance and adapt her study habits by incorporating suggestions from others more knowledgeable than she. Because Dria worked hard to overcome her lifelong learning challenges (beginning in grade school), today she’s excelling in law school. Most importantly, she enjoys what she is learning and also enjoys the process by which she is learning.

As any parent or teacher knows, when a student enjoys learning, her motivation to continue learning grows. So I anticipate (with an admitted sense of relief) that in a few years time, we will be able to report that Dria has completed law school and gained additional insights into how her learning disabilities have contributed to her achievements — and that she will be on to new challenges.

One of the hardest lessons we’ve had to learn as parents is that, in spite of our best efforts to shield our children from pitfalls, we can’t always do it. This became especially apparent when our kids were in middle school and high school. As Dria’s experience with the linguistics class illustrates, parents can offer their perspective, but kids need to make their own decisions, including mistakes. We can support them regardless of outcomes, saying, “I’m sorry it didn’t work out” (and trying not to say “I told you so” ), and going on from there. We can also encourage our kids to establish communication with other adults (e.g., school counselors) who can provide insight into their particular situation. Most importantly, we work to keep the lines of communication open between our children and ourselves.