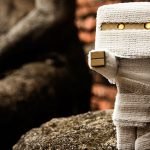 How you can help at home: Make shawabtis, small mummy-like statues, to introduce your child to the art of ancient Egypt.

This activity helps children learn about Egyptian art and culture, while exercising their imagination.

Small statues, about the size of an action figure today, were placed in a tomb to help the mummy when it supposedly awoke and did work in the afterlife. They each looked like a small mummy with its arms crossed and each had written on it a spell from the Book of the Dead that was supposed to bring them to life. Called shawabtis (pronounced “shahwahbtees”), the statues were supposed to call out “Here I am!” when, in the afterlife, the mummy was given work. The shawabtis, having volunteered, would then do the work for the mummy. Although many Web sites have images of shawabtis, one of my favorites is from The Metropolitan Museum

Imagine having your own shawabtis to help at home or at school. What would you want them to do for you, how would the shawabtis do it, and how many would you need? Make your own “shawabtis” out of clay. They can be like the Egyptian shawabtis, or you can make them take the action poses they’ll need to magically help you.

Dr. Mike Norris is associate educator in charge of family programs at the Metropolitan Museum of Art in New York.