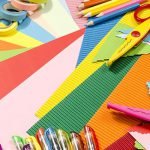 How you can help at home: To learn about Egyptian art, try making your own obelisk out of paper.

Create your own obelisk

This activity will introduce children to how Egyptians used decoration to give extra meaning to a structure and will encourage them to explore this concept through their own creativity.

Check out obelisks around the world

Can you think of a tower in Washington D.C. that was inspired by Egypt? That would be the Washington Monument, which is the largest obelisk in the world (pronounced “ahbehlisk”). An obelisk’s four sides had the carved names and titles of the pharaoh who had erected it and sometimes pictures were cut near the top. Of the Egyptian obelisks around today, the tallest is about 100 feet, about the lengths of two and a half regular city buses. There are many Web sites on obelisks, but one that includes pictures of several existing obelisks is A World of Obelisks.

Make your own life-size obelisk

To decorate your own obelisk, try the following activity. (You can do a simpler version if you want, by just using a sheet of drawing paper cut into the shape of an obelisk.) Take a roll of paper, unroll it to the desired length (the smallest Egyptian obelisks were probably 5 to 6 feet in height), fold over the paper to make a crease at the top, then cut along the crease to detach the sheet. Fairly near the top of this sheet make diagonal cuts at either side that meet in the middle of the top edge of the paper; this will give the top of your “obelisk” a triangular form that will represent the pyramid shape of the top of an actual obelisk. Tape the sheet onto a hard surface with masking tape. (You may want to cut four lengths of paper to make up the four sides of the obelisk to be decorated.)

Find pictures or Web sites that show Egyptian obelisks and look closely at their decoration. You might want to pretend to be a pharaoh and to decorate the obelisk with pictures of great deeds you have done, with the various names of you as a ruler, and stories of adventure during your reign. The names and stories can be in English, but perhaps written or arranged in such a way that it looks like Egyptian writing. The design of the decoration should first be created using a pencil. Then follow with colored pencils, crayons, chalk and even paint for color.

After finishing, decide where this obelisk should stand!

Write your name in hieroglyphics

If you would like to include your name in hieroglyphs in the decoration of your “obelisk,” you may want to look at Write Like an Egyptian. Once you write out your name in English, it prints out the hieroglyphs for you that stand for the sound of your name. You can then cut out this name and paste it on to the “obelisk.”

Dr. Mike Norris is associate educator in charge of family programs at the Metropolitan Museum of Art in New York. December 2005