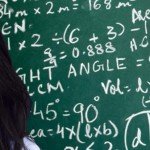 Who says math can’t be cool?

Newsflash to The Wonder Years fans who grew up wanting to be either Winnie Cooper or her boyfriend: the doe-eyed ingénue isn’t a little girl anymore. The star of the popular ’80s TV show did something almost unimaginable for a former child star and renowned beauty — she wrote four books about mathematics, including Kiss My Math and Hot X: Algebra Exposed!, all specifically for girls.

Rather than spotlighting skinniness (think “Nothing tastes as good as thin feels”) or writing about her weight-loss secrets, Cooper’s cri de guerre is convincing girls that math is for everyone. Being passionate about the curves of geometry or loving algebra’s elegance — by no means does this make you a geek. If you see it McKellar’s way, math is cool. Instead of running away from a quadratic equation like so many girls do, says McKellar, sticking to it and mastering math will empower girls to tackle life’s challenges. And this, McKellar explains, is part of why being good at math is sexy: you’re smart, you’re capable, and you know it.

But before you get there, you have to do the work. And part of that work means overcoming stereotypes. The actress explains why you’d expect her to be an Asian guy, when girls judge themselves too harshly and hold themselves back, and how to be both good at math and a “regular” girl.

Why do so many girls say they can’t do math?

It’s social conditioning. Girls are taught from the moment they’re born that the most important thing about them is their appearance. Boys don’t get that. For boys, it’s, “Hey there, Champ! How you doing?” “Oh my gosh, you’re getting so big!” But girls tend to be inundated with, “Look at how pretty you are! That is the cutest dress ever!” and they get conditioned from toddlerhood to feel their value is in their appearance. It continues into their teens — if they’re sexy, if they’re cute, if they know how to do their hair or makeup. Is any of this important? Sure, if you have a job interview, you have to know how to put yourself together. But that’s just the icing on the cake; it’s just the decoration. The reason I did teen magazine-type math books is that I want to tell them: you don’t have to choose. You can be fabulous. Build your brain and you’ll be stronger. Wanna be glamorous? Then picture yourself not as a vapid model on the cover of a magazine, but as a fabulous woman on Wall Street in four-inch heels!

How were you able to overcome your own “I’m bad at math” mantra?

When I was growing up, nobody ever discouraged me. I was told I could do anything I wanted in the world. I was good at math in high school, but it was a challenge. The math I was taking was so advanced they had to hire a separate calculus tutor for me on The Wonder Years set. I graduated in the top three percent of my high school. But when I got to college, for some reason I didn’t think I’d be able to handle the math classes.

Looking back, it’s because I didn’t look the part. Who would be good at college math? To be honest, it would be an Asian guy. Despite all the encouragement I received growing up, the stereotypes our society is steeped in still got through. Luckily, I always liked challenges, so in the face of all my self-doubt, I signed up for multivariable calculus. To my amazement, in a class with 165 students, I earned the best score on the midterm. I got 22 points out of 40; the next two highest scores were 15 out of 40, and everyone else got a 9 or below. I was floored. I started taking more and more math classes. I felt smart and important and valuable for something that had nothing to do with Hollywood. The Wonder Years had just ended, the ex-child-actor insecurities were starting to set in, but suddenly I was gaining a new identity and sense of self through my success in math. It made me feel this is something to grab onto. I was able to build myself up on the inside; it’s something nobody could take away from me.

Is that discovery — that you are not only good at math but loved it — the inspiration to write math books for girls?

Yes, I discovered my love of math and saw how it made such a big difference in my life. I decided that with the math books, I could give this to other girls. There are so many things out of their control, but this is within their control — to work hard, get better at math, and in the process, actually become smarter and more confident.

Doing math is like going to the gym for your brain. If math were easy, it wouldn’t have the same value — a value far beyond understanding numbers so we don’t get ripped off by credit card companies. One of the most important values in studying math is that when you come upon a problem, and you work hard and get it, you learn to overcome obstacles. This helps whenever you face a challenge later in life. You’ve practiced the skill of problem-solving, even in the face of seemingly insurmountable odds, and now you think, “It’s a good thing I’ve got me on my side for this challenge.” It’s so valuable for teenagers, and especially teenage girls, to work on self-confidence and the internal fortitude that comes from feeling capable — and math is an excellent tool for building that feeling. It’s going to help them in every aspect of their lives.

Why do so many girls fall off the math ledge in middle school?

First of all, math becomes more challenging in middle school: decimals, fractions, percentages. It’s the age when girls become more aware of the world around them and who they are going to be in the world. It’s the age when they become self-conscious. Their hormones kick in and, unfortunately, they also become aware of their appearance. They worry about becoming a nerd, living up to society’s expectations: How thin am I? How fit am I? With the fear of becoming a nerd, and the belief that math is really for boys anyway, girls begin to shy away. Their confidence sinks lower and lower.

Girls can also be incredibly hard on themselves. I’ll ask teenagers: “Are you good at math?” Boys will often say yes when they are getting a B+. But girls will say no — and then they’ll tell me they’re getting an A-.

There’s another obstacle: teachers who aren’t trained to teach math.

Yes, there are some teachers who don’t want to be teaching math. They’re told, “If you want the job, you have to teach math.” And if they don’t know how to teach it, the kids get lost. Kids never think it’s the teacher’s fault at that age; they figure they just can’t learn it and feel stupid. I empathize with teachers — even if they understand the material, they are more and more squeezed for time. It’s hard to make their lesson plans more fun. A lot of teachers, whether they use my book or not, don’t have time to come up with interesting lesson plans. I really feel for teachers. Things are getting harder and harder. I’m doing my best to help!

What advice would you give parents to make sure their kids don’t fail at math?

Especially when your kids are younger, don’t talk about it if you didn’t like math. Avoid it at all cost. Even if you have no idea how to do your kids’ math homework, just say, “You know what, they teach it differently right now.” Saying you’re bad at math lowers the bar for your kids. I know that’s not totally honest, but this is a really good area to not be completely forthcoming about. Encourage them. Show them math in everyday life — the numbers around them at the grocery store, in their allowance, and so on, so they can see it’s an important part of their life.