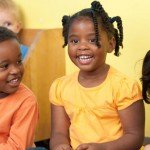 Knowing what to expect as your child grows can reassure you that your child is on track with his peers or alert you to potential concerns. Below are some developmental milestones to watch for during the preschool years.

Since birth, you’ve watched your child grow and develop. You’ve noted his height and weight, when he crawled, stood, and walked, even when he spoke his first words — and perhaps compared all of these developmental milestones of his infant and toddler years to the “norms.” The preschool and early school years are also full of changes. From three to five your child’s motor skills, language, thinking, and social development change dramatically.

Knowing what to expect as your child grows can reassure you that your child is on track with his peers or alert you to potential concerns. Below are some milestones to watch for during the preschool years.

No longer a toddler, your 3-year-old takes in knowledge about himself and the world around him.

Your cooperative, easy-going 5-year-old loves to play and that’s how he learns.

A “snapshot” of two 5-year-olds

This story of Jimmy and Maria illustrates the range of skills, interests, and abilities considered typical development for this age.

Jimmy pressed his forehead against the window as he watched his neighbor Maria drive away in the car with her mother on their way to her first day of kindergarten. He sighed and waved. He hoped Maria would see him, yet he didn’t want to go outside to make sure.

Jimmy felt sad and disappointed that he was’t going, too. At the same time he was glad that he could stay home.

Jimmy had asked his mother why he wasn’t going to school. He was going to be five soon, just like Maria. And he could do all kinds of things. He was good at running, jumping, and climbing. He could roller skate and ride a tricycle. Maria could do some of those things, too, but not like Jimmy.

Maria couldn’t really climb a tree, but Jimmy was the best tree climber ever. He didn’t tell his mom, but he had climbed the tall tree in Maria’s back yard. She didn’t even try to climb it. She just yelled at him to come down. She thought he was going to hurt himself.

“Girls! Maybe it’s a good thing that Maria is going to school,” Jimmy thought. “It’s better to play with boys anyway. Boys do more fun things. Girls like to sit and color and write and play house and cut out paper dolls and all those yucky things.” But Jimmy had to admit that Maria liked to play ball and chase and run, too.

If only Billy lived closer! But mom said he’s too young to walk all the way over to Billy’s by himself.

“Young, heck! That’s what Mom told me about school — I’m too young to go to kindergarten. I’m going to be five in two weeks! That’s not too young,” Jimmy had told his mother.

She replied that she wasn’t talking about being just five years old. She said that he was a “young five.”

“Whatever that is!” thought Jimmy.

Mom explained that there were things he still needed to learn before he went to school.

Mom had said it was OK to stay home and just go to preschool until kindergarten. She told him that not all five-year olds do everything at the same time. Maria can draw and write numbers and letters and cut with scissors, but Jimmy was just beginning to do those things.

He told her that he could run, jump, and stand on his head better than Maria could. Mom said that was great, but in school they want you to sit in a chair and write and cut and paste. That made him very, very sad, and he cried a little. Mom hugged him and told him that he was just fine and soon he’d be able to do all the things that Maria could do.

“Look at all the wonderful things you can do,” she said. “You build great castles in the sand and amazing objects with Legos. You tell wonderful stories, and you listen very carefully when I read books to you. And you’re a super joke teller.” Mom always laughs and laughs at Jimmy’s funny jokes.

She told him that next year would be a fun year, and he would grow and learn a lot. In preschool, she called it pre-kindergarten to make him feel better, he’d learn all those things that he’ll need to know for kindergarten. She said she would help him with the alphabet and numbers and writing at home. She said he already knew his colors and shapes and that he uses grown-up words when he talks.

“Mom is always telling me all the things I can do. That makes me feel good. I know she really loves me!”

Remember that these milestones represent averages, not rigid developmental deadlines. Children move through these changes at varying rates, some sooner, others later. You’re the best judge of your child’s development and what is “normal” for him, but if you have any concerns, discuss them with your child’s pediatrician. Just when you think you’ve figured out your child, something changes. Today he demands constant attention; six months from now he may be pushing you away. You may find strategies that once worked no longer have any impact on him. Don’t worry, this is normal!