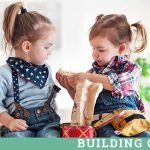 From taking turns to eating dinner together, research shows that encouraging generosity in your child isn't as hard as you may think.

“That’s my red train!” Emma yells at her twin sister.

The little lookalikes explode in anger — biting, scratching, and slinging toddler epitaphs as they battle for sole possession of the crimson locomotive.

“Stop, please,” you beg, wondering how did they share my womb for nine months?

While watching toddlers fight over a toy can make it seem like their natural state is every-kid-for-herself, anthropologists say generosity is a deeply ingrained human behavior. Helping others promotes the survival of our species. Young children’s understanding of the nuances of generosity is complex, but encouraging altruistic behavior doesn’t have to be. Try working these simple tips into your daily routine to cultivate your child’s generosity.