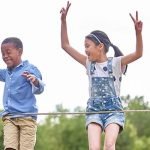 Knowing what to expect as your child grows can reassure you that your child is on track with his peers or alert you to potential concerns. Below are some milestones to watch for in your 6-year-old.

In the early school years, you won’t see dramatic changes in motor skills because this is a period of refinement, when coordination improves and fine motor skills are sharpened. But you will notice remarkable changes in social and thinking skills. Your child is now building on the base of skills developed during early childhood and moving toward greater independence, both intellectually and emotionally.

Here are some of the milestones you can expect of a 6-year-old:

Tips for parenting a 6-year-old

At 6, your child is curious, active, and becoming engrossed in school and new friendships.

Snapshot of a 6-year-old

Jenny’s story illustrates the range of skills, interests, and abilities considered typical development for this age. Marilyn laughed and thought of her daughter, Jenny, as she finished the last lines of a poem by A. A. Milne:

So I think I’ll be six now for ever and ever.”

The imagination of a 6-year-old is amazing. Marilyn thought about Jenny’s clever and creative thinking to explain the unexplainable. When a frog appeared in our backyard pond, we wondered how he got there. Jenny had no problem explaining it this way:

The frog, desperate for water, asked Mr. Jack Rabbit, who is a really fast runner, “Please take me to a place with water.”

Being a good friend, Mr. Jack Rabbit said, “Of course. Just jump on my back, and I’ll take you to this nice pond.”
So the frog jumped onto the rabbit’s back, and the rabbit brought him to our pond.
“He really likes it here, and he’ll be Jack Rabbit’s friend forever,” said Jenny.

Her father praised Jenny for her great story but said he didn’t think it really happened that way. “You know animals can’t talk,” he said.

“Yes, they can! We may not be able to hear them, but they really can!” Jenny said. “Remember all the animals in the Just So Stories? They can talk. The Indians know they can talk.”

Dad wanted Jenny to understand the difference between what’s real and what’s pretend without taking away the magic and mystery of childhood beliefs, so a long talk followed. Jenny knows that Santa Claus may not be able to come down the chimney, but she’s positive he exists. And she very aggressively defends her ideas.

Like all six-year-olds, Jenny is dedicated to fairness and makes sure everyone follows the rules. Since she learned to read in first grade this year, she reads all the road signs and informs drivers about whether they’re following the rules. The other day she told her dad that if he didn’t obey the law to go 25 miles an hour, he probably would not be able to live at home. “People who don’t obey the law are bad, and bad people can’t live with good people.” explained Jenny. “Not that you’re bad, Daddy. But people might think you’re bad if you don’t obey the law.” Jenny wanted him to follow the rules, but she didn’t want to hurt his feelings. She’s very sensitive about other people’s feelings. She was probably a little nervous and fearful that something terrible might happen to her dad if he didn’t obey the law. In relaying what she knows about rules, she sometimes gets information confused. Marilyn smiled and a warm feeling spread through her as she thought about her daughter. What a delight she is — always trying to understand and explain her world.

Just then, Jenny burst into the house with exciting news. She threw her arms around her mother and told her that Sophia had asked her to spend the night.

“That’s exciting,” answered Jenny’s mom. “I think it will be all right, but let me talk to Sophia’s mom and find out all the details. After I talk to her, we can decide what’s going to happen.”

Jenny skipped through the afternoon gleefully planning her first sleep over with her friend.

Later, Jenny came to her mom and asked a very important question. Would there be monsters in Sophia’s house?

About a year ago, Jenny was very concerned about the monster she was sure was under her bed. Even after many discussions about real and make-believe, she still had fears. She came to me with a plan to get rid of monsters, especially bed monsters. I participated in Jenny’s “Monster, Be Gone!” ceremony and now she’s able to sleep in her bed, certain the monster has left.

Marilyn assured Jenny that she would talk to Sophia’s mom about monsters and make sure that there were none in her house. She gently tried to convince her daughter that monsters weren’t real and there was nothing to worry about.

“But if they do,” said Jenny,” we’ll just perform the “Monster, Be Gone!” ceremony, and everything will be just fine.”

Remember that although the milestones mentioned here are typical, children pass through these stages at their own pace. Some will be earlier, some a little later. Discuss any concerns you may have about your child’s development with a pediatrician or teacher.