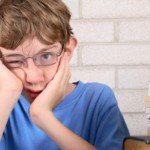 One middle-schooler struggles not with the academics but the assignment itself.

Somewhere along the way, the 13-year-old eighth-grader from Connecticut developed a habit whose roots are complex but whose consequences couldn’t be clearer: utter disorganization. At its worst, Tim is as likely to produce his evening’s homework assignments — forget about a finished product — as to recite War and Peace.

“It was late in seventh grade that I started noticing a pattern where I could never find anything,” he says. “I’d always have papers scattered everywhere in my backpack and never knew where anything was. I wasn’t getting my work in, and I started getting worse grades.”

To hear his mother describe it, this isn’t a case where the student loses his homework because secretly it’s too hard. Tim’s problems didn’t seem to be about comprehension — somehow they orbited exclusively around the more practical aspects of schoolwork: taking note of his assignments, bringing home the necessary material, and going through the concrete steps of getting them done.

“We gave him folders, but he wasn’t using them,” Tim’s mother says. “And he would lose things. He wasn’t writing down his assignments, so we wouldn’t even know about them until they were late.”

Like so many homework problems, Tim’s snowballed. What might have been a containable issue mushroomed until he felt wholly overwhelmed — the prospect of ever catching up on old assignments seemed impossible. Soon D’s began appearing on his report card. Meanwhile, efforts by Tim’s parents only seemed to make things tenser.

“Sometimes I’d take things out of his book bag and have him put them back neatly. But he’d just get upset. He’d say he has his own way,” his mother says.

The diagnosis: More than carelessness

Indeed, he did have his own way — it just wasn’t one that worked in the context of middle school. So says Marc Hoffman, the academic coach Tim’s family hired to work with their son. His organization, Hoffman Education Group, offers something beyond subject-specific tutoring: a broader look at how to approach schoolwork more effectively. What Hoffman found — which was confirmed by tests Tim took — is that the disorganization problem was rooted in what psychologists call executive functioning.

“In layman’s terms, this means understanding the steps necessary to complete a task. It involves planning — a child with executive functioning issues doesn’t understand how to estimate how much time it will take to do an assignment, or what the steps are in, say, writing a paper,” Hoffman explains. “‘Write a paper about Ben Franklin.’ The dilemma would be, Is it supposed to be a biography? Or a thesis-driven paper? What exactly is the teacher asking for? These questions then lead to a feeling of being overwhelmed: How am I going to get this written down?”

Hoffman says these issues frequently manifest around seventh grade, when schooling becomes more of an independent process. “Middle school and beyond isn’t systemized for students with these issues,” he says. “[For] good students who do well, their system is aligned with the structure of the school. Not so when there are executive functioning issues: That’s where serious disorganization develops.”

Hoffman’s approach in such cases combines nuts-and-bolts solutions with a whole new approach to talking about the problem.

“With chronic issues like this, the student loses his or her sense of control, and there’s an instinct to give up,” he says. “One of my first steps is emphasizing what he’s doing right. In positive psychology, there’s the idea that focusing on the positive will evolve into additional positive experiences. So many of these kids are so often slammed for what they do wrong. So when a kid misses seven assignments but gets one in, you focus on that one — ask what it is they did right in that case, so they can learn from it.”

In his twice-a-week meetings with Tim, Hoffman works to create a running conversation about recent assignments that might otherwise just swirl chaotically in Tim’s head — or get buried in the stress of discussing them with parents.

“Then it’s about concrete things: We get his planner out. We look at what he’s written down and discuss what the upcoming assignments are going to be. We discuss what assignments he might’ve missed. And we’ve created a running column in his planner: immediate, long-term, and reminders,” Hoffman says. “I’m helping him keep lists too. Recently he had to speak to his science teacher, for example. Now he writes that down in his planner because he understands he’d forget to do so otherwise.”

That last part is crucial — understanding the problem. Hoffman says this “metacognitive element” is essential to effecting lasting change. By continuously talking things out, students start to recognize their own behaviors. Given the developmental limitations of a young person, that’s no small trick, Hoffman says.

What’s emerging from these meetings, according to Tim and his mother, are gradual but steady improvements. There haven’t been any D’s on his report card in a while. He’s using a planner now, with an easy-to-use binder system. And he’s got something like a mantra that he repeats when a teacher starts describing the evening’s homework: Get the assignment in there. Get the assignment in there. It may sound obvious, but when disorganization is an ingrained habit, simplicity is key.

Still, Hoffman sees his students’ tasks as about hard-won improvement rather than miraculous transformation. “I don’t think they’re ever going to transform into incredibly organized people,” he says referring to some of his students. “That’s fine. What they can do is develop skill sets to keep their lives in order.”