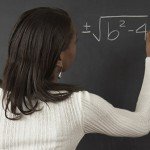 Your 8th grader and math under Common Core Standards

Eighth grade math may seem like a separate language, or at least a parallel universe of definitions. When your child talks about things that are radicals, irrational and variable, chances are she’s referring to math class rather than reflecting on life.

By the end of eighth grade, your child will be close to mastering these skills:

That is so irrational

Rational numbers include positive or negative whole numbers, simple fractions and decimals (including those that have repeating patterns like .2323…). Irrational numbers are decimals that go on forever without repeating a sequence of numbers. Pi – π – is the most famous irrational number. It has been calculated to over a quadrillion decimal places and still no pattern! No wonder it has a day of its own.

A big part of eighth grade math focuses on linear equations, linear functions, and systems of linear equations, which are used to show the relationship between two variables. The idea of them may sound intimidating, but you use these all the time without thinking about it. Watch this GreatSchools video to see a real-world example.

“This is the most important and challenging concept to learn in eighth grade,” said Ryan Redd, a math teacher at Roland-Grise Middle School in Wilmington, NC. “This is a crucial foundational skill for high school math.”

Eighth graders will learn to plot these relationships on graphs; creating slopes that make the proportional relationships easier to compare and look like this. 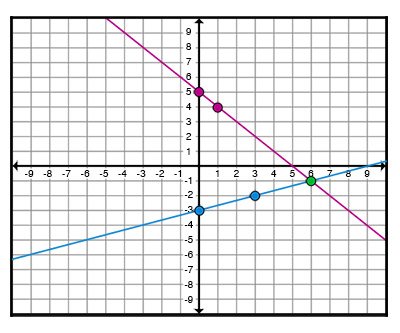 Just as it sounds, a function describes a relationship where one thing affects another thing. For example, your child’s test score is a function of how much she studied.

Mathematically, a function is when one number, called the input, changes the next number, known as the output. There is only one output for each input.

Example: What’s the relationship between driving fast and mileage? Compute how much your gas mileage decreases for every mile over the speed limit you drive.

Your eighth grader also learns about roots, known as radical numbers, and exponents. Square roots are the most common radicals. The symbol looks like a check mark, √. When there’s a number after the square root sign, such as √49, it’s asking students to find a number that, when multiplied by itself, equals 49. The square root of 49 is 7.

The flip side of roots are exponents. They indicate how many times to multiply a number by itself. Exponents are written like this: 67. Here, the 7, which seems to be sitting on the 6’s shoulder, is the exponent. It could also be written out like this: 6 x 6 x 6 x 6 x 6 x 6 x 6. Your child will also work with negative exponents in eighth grade.

The shape of the universe

Your eighth grader has been playing with shapes for years inside and outside the classroom. If she’s plays a field sport, she’s already fluent at thinking in triangles (three players each holding a point), flipping their orientation, rotating them and moving them across a plane (toward a goal, for instance) – three key skills she’ll have to do in math class this year.

Finally, your child will be expected to extend her mastery of volume: finding the interior space of more complex three-dimensional shapes like cones, spheres, and cylinders. Here’s a quick refresh on these formulas.

If your eighth grader complains that the complex math she’s starting to learn isn’t relevant to her daily life, you can argue this point with one simple word: statistics.

Understanding statistics will help your child make big life choices, such as which car to buy, which foods to eat, which fantasy football team to bet big on. In eighth grade students are just starting to compare different data sets and learn what conclusions they can draw from them.

Specifically, eighth graders should be able to analyze data using charts and graphs and be able to explain the patterns in the data. For instance, kids might be asked to gather data on which students are allowed to date and which are expected to do chores, then chart these results to see if there’s a correlation. Are kids who date more or less likely to do chores?

Eighth grade math is hugely important for the big kahuna math to come in high school. If your child needs help, the best thing to do is to home in on what’s most difficult. Even though there’s a huge amount to cover, if you can help your child master their biggest struggles, then you’ll go a long ways toward helping them be ready to learn once they get back to class. And if you have trouble with this stuff, remember the best way to learn stuff is often to teach it, so ask your child to give you a lesson in eighth grade math.