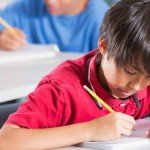 Writing on the wall

Expert Douglas Reeves says kids aren't learning to write, and it's a disaster in the making.

“Michael’s class didn’t do that much writing this year,” mused a friend whose 9-year-old son attends a high-performing California public school. “Then I realized California didn’t administer the writing test this year because of the budget problems.”

It’s an ugly equation: No testing = no curriculum = no learning.

But it’s one many parents around the country may be grappling with as budgets fall short and standardized tests rule the classroom. Of course, not every school allows its teachers to skip what their students won’t be tested on, but writing occupies a particularly precarious place in curriculum battles. No one would dispute that it’s part of the core curriculum, but it’s both time-consuming to teach and expensive to assess since you can’t test it through computer-corrected, multiple-choice questions.

Yet Douglas Reeves, an expert in educational standards and the author of Reason to Write, argues that these obstacles are no reason for schools to avoid teaching writing — even in elementary school. In fact, beefing up writing expectations across the curriculum may be the key to helping kids improve in other subjects as well.

GreatSchools: What is happening with writing standards? Is writing being taught more or less than when we were young?

Douglas Reeves: Writing standards are now lower. More than 60% of students never write a single term paper in high school. Universities are finding that a majority of incoming freshman don’t have adequate writing skills. Yet according to a report from Carnegie, writing is essential in teaching kids to be good readers.

Someday — supposedly in 2015 — the common core standards will be implemented, and with them significant new writing standards that require nonfiction writing across the curriculum. But in the meantime, states determine standards, and when it comes to writing, they vary substantially. And because of budget cuts, a lot of schools have retreated from writing.

GreatSchools: But there’s so much emphasis on reading now. Isn’t that enough?

In fact, nonfiction writing is the most highly leveraged kind of learning — it improves kids’ reading, math, social studies, music, and PE. It’s “thinking through the end of a pen.” Writing improves thinking.

And if you have kids read and then write about what they read, it dramatically improves their reading comprehension and recall.

GreatSchools: What can parents do to help their children develop writing skills?

Reeves: Number one, teach kids to write because they have something to say, not because it’s a dull chore. You don’t tell kids to read because the teacher says so, but because they love Harry Potter. Use journals and letters to get kids to write outside the classroom. In this summer of scaled-down vacations — all the greater opportunity to emulate travel logs like those of Lewis and Clark — it’s a great opportunity to have kids write for the right reasons.

Also, don’t dismiss the importance of handwriting to help kids slow down and think.

GreatSchools: What’s the most common misconception parents have about teaching kids to write?

Reeves: Some parents think it’s too 20th century, but writing remains extremely important. Our colleges are spending $30 billion a year on writing training. Kids need to be able to write, and the failure to write is hurting kids.

Another misconception — by some teachers too — is that nonfiction is boring, not exciting, but this underestimates the intellectual power of kids.

GreatSchools: What’s the hardest thing about teaching kids to write?

Reeves: Loving them enough to make them do things again, to give them feedback that’s honest and accurate. Way too many teachers and parents don’t have the heart to make kids do things again.

GreatSchools: What should we expect from our children’s teachers in terms of writing instruction?

Reeves: We have expected schools to do so many things, and they can’t. Advocate more writing in school — but I’m realistic. Complaining is a notably ineffective strategy. Parents have to step up.